The unveiling of the banner establishing Vosburg Neck State Park on Sept. 19 (top) was met with cheers and applause by community members and project partners. It is the 122nd state park in the DCNR’s repertoire of outdoor recreational areas and the first in Wyoming County. The park is at mile 222 of the 444 miles of the Susquehanna River from Cooperstown, NY, through Pennsylvania to Havre de Grace, MD.  Among those who spoke at the park dedication were (above, front, from left) Rep. Tina Pickett, Rep. Karen Boback, Sen. Lisa Baker, North Branch Land Trust director Ellen Feretti, DCNR secretary Cindy Dunn, (back) Wyoming County commissioners Rick Wilbur, Tom Henry and Ernie King, DCNR deputy secretary John Norbeck, and PA Fish & Boat Commission executive director Tim Schaeffer.

Dozens of public officials, DCNR representatives and state conservation officers gathered along the Susquehanna River in Washington Township, Wyoming County on Sept. 29 at what has been known since 2006 as the Howland Preserve. By the time they departed, the property had the prestigious new name of Vosburg Neck State Park, culminating more than a decade of persistent lobbying to make the 669-acre tract Wyoming County’s first state park. 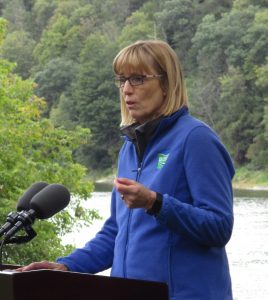 “The land and the water have been screaming to be a state park for years,” DCNR secretary Cindy Dunn (above) told the crowd. “We just had to hear it.” Four counties did not yet have state parks, she noted, “But Wyoming County made the most noise.”

The idea of establishing a park on the former estate of Ernie Howland upriver from Tunkhannock had been proposed for decades, even by Howland himself to then Wyoming County commissioner and personal friend Rich Fitzsimmons. “He wanted it to be preserved, and he didn’t want it to be a national agency,” Fitzsimmons related. “He wanted it to be local or state.”

In 1990, years before Dunn would be appointed to her current position, Fitzsimmons invited her on a paddle on the North Branch Susquehanna River. “I saw Wyoming County for the first time from the river,” Dunn told the crowd. “Coming into the Vosburg Neck from Mehoopany is captivating.”

Facing mortality in 2003, Howland bequeathed the majority of his property to the North Branch Land Trust, a non-profit land preservation group that he barely knew. But NBLT board members saw Howland’s vision and opened the land to the public in 2006, establishing the Friends of the Howland Preserve to enhance and maintain the site.

The site immediately garnered the attention and support of nonprofit agencies like the Endless Mountains Heritage Region (EMHR) and the Endless Mountains Visitors Bureau, as well as local manufacturer Procter & Gamble, which allowed for the completion of miles of trails, better river access and wayfinding, promotion, and stabilization and improvements to the iconic red barn and yellow house along Vosburg Neck Road.

“As the state-designated heritage area for this region, we are excited to see Wyoming County get its first park,” said EMHR executive director Cain Chamberlin, who noted that Vosburg Neck is now the fifth state park among the four counties served by the organization. “Since the Vosburg Neck and Howland Preserve already have hiking trails and public access to the river, the new state park possesses all of the components that we at the Heritage Region aim to promote and encourage the public to engage in.”

In 2016, the Preserve found its most ardent advocates, according to DCNR deputy secretary John Norbeck (below). “Secretary Dunn came to me and said, ‘Vosburg Neck’ should be a park,” Norbeck recalled. 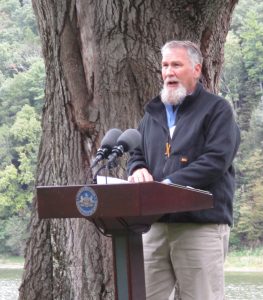 “Subsequently, Sen. Baker called us and said the same thing. It was rather serendipitous that the great minds were thinking the same thing at the same time.” Baker initiated a feasibility study, he noted. “The only drawbacks were that we needed staff and funding, and neither of those were available.”

The Wyoming County commissioners consistently voiced support for such an endeavor, but the scope of the project was beyond the resources available to them.

In 1955, Dr. Maurice Goddard, the first director of the Department of Parks and Forests, proposed building a state park within 25 miles of every resident of Pennsylvania and, by 2021, that goal had been achieved in most counties in the Commonwealth. “It always bothered me that Wyoming County wasn’t one of them,” Baker (below) remarked. With the estimated $12- to $13-million needed decidedly out of reach, a number of supporters began to doubt that Wyoming County would ever get a real park. 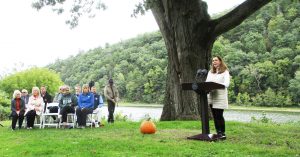 Things began to change rapidly at the beginning of this year. The value of natural gas began to skyrocket at the onset of the Russian invasion of the Ukraine, and updated court interpretations of the Oil & Gas Lease Fund started in 1955 made it clear that the money collected through the leasing of state lands for gas production should go right back to providing natural recreation for the citizens of Pennsylvania.

“Those funds are dedicated to conservation, recreation, flood control, and land acquisition,” Norbeck explained. He, Dunn and Baker began having regular meetings with Gov. Tom Wolf, who Dunn said was on their side from the start. In fact, they were able to set aside $56,000,000 as part of Wolf’s overall $700,000,000 environmental budget toward the creation of not just one, but three new state parks, the other two being in York and Chester counties.

“The stars aligned with the state budget,” Baker noted. Negotiations got underway between the DCNR and the NBLT. Karen Boback, whose tenure as a state representative of the citizens of Wyoming County will come to and end this year, and Rep. Tina Pickett, whose 110th District has been shifted to include Wyoming County, participated in the ongoing discussions.

“This is a great day for Pennsylvania and a great day for Wyoming County,” said John Hallas, director of the Bureau of State Parks. “Whether you are seeing it on the mural on the Dietrich Theater or seeing it in person, you can tell it’s going to be a great state park.”

Clearly, it was a bittersweet moment for Boback, who addressed those in attendance and expressed gratitude for Gov. Wolf, Cindy Dunn, and Sen. Baker. “Teamwork becomes dreamwork,” she said of all the parties involved in achieving the goal. “As a teacher, we looked for places like this to take our students. Just imagine. Now they will be able to come here.”

“We can see the possibilities of what can happen here,” Pickett added. “This makes people want to live, work and play here.”

Many of the speakers acknowledged the commitment and dedication of Doug and Ali Wilson, a pair of Tunkhannock school teachers who have lived in the yellow house, coordinated private functions in the big red barn, and spearheaded the maintenance of the property for the past decade. 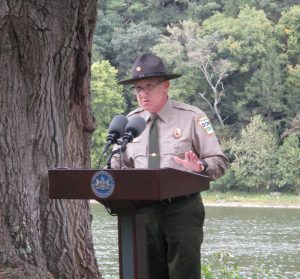 “We at DCNR know that we can’t do it alone,” said Hallas (above), maintaining that the relationships and collaborations that led to the project’s success are crucial to its survival. “We still need your partnerships. We need all hands on deck to bring people to this wonderful place.”

“We’ve maintained a great partnership with Friends of the Howland Preserve and have utilized the Preserve and Camp Lackawanna for various river sojourns, board meetings and other events,” Chamberlin remarked. “This state park designation will only solidify that partnership. We’re so excited to see our parent agency – the DCNR – step in to ensure this beautiful and historic piece of land is conserved for future generations to appreciate and enjoy.”

According to a press release from the DCNR, public access has been granted at each of the three new state parks, though amenities may be limited initially. While Vosburg Neck State Park is likely to remain its official name, that too is part of the master planning process for each site that will evaluate the available resources, potential visitor amenities and recreational opportunities, and provide a chance for the public to provide input. 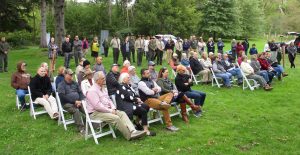 Kayakers lead by long-time river guide David Buck arrived at Vosburg Neck via the Susquehanna River just moments before the dedication of the new state park. 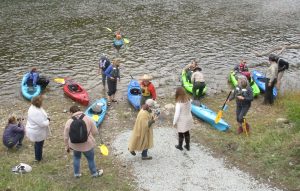