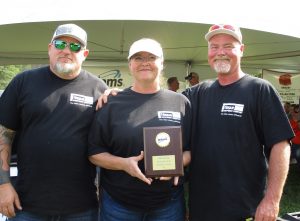 Returning champions, Team Cleveland Brothers, represented by (top, from right) Jim Shawley, Phil Moser, and Aaron Moser are congratulated by Tammy Bonnice of Williams for their Grand Champion win and People’s Choice award. Hague Equipment employees (above, from left) Steve Brown, Linda Gaskill, and Dave Gaskill accept their team prize for their ribs and beef brisket. Team members from Ariel, which operates out of Springville and provides compression services for the natural gas industry, included (below, from left) Nate Baggs, Joe Hagan, Mike O’Grady and David McCoy. Their big wins for the day came form their pulled pork in both the blind-taste judging and VIP categories. 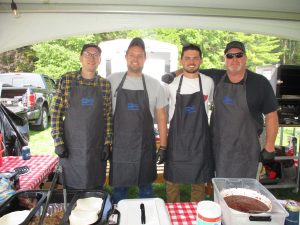 The United Way agencies of Susquehanna and Wyoming counties in Pennsylvania and Broome County in New York were the beneficiaries of another successful barbecue cook-off conducted by Williams on Sept. 16. Approximately $70,000 was raised through vendor fees and the generosity of barbecue fans to which Williams will add a match for all eligible funds raised. It is one of the largest gatherings in the region of energy companies and those who support the natural gas industry.

“It’s one of the highlights of the year for UWBC staff to socialize with and, more importantly, thank the Williams team for their long-time commitment to the many communities they support,” said Tom Connors, director of resource development for the United Way of Broome County. “The barbecue is a positive setting, and the food is always great.”

This was the 10th year for the fundraiser at Lazybrook Park in Tunkhannock, with just one year off in 2020 at the height of the pandemic. The number of teams in the three meat categories – pulled pork, beef brisket, and ribs – varied, but nobody in attendance should have gone hungry. Portions were generous, and other vendors help compliment the meats with side salads like coleslaw, broccoli salad, and “cowboy potatoes.”

There were basically two kinds of judging. Blind tasting was conducted under the Williams tent, where a trio of judges were brought samples that were only numbered. Jim Garner of Tunkhannock is a certified Kansas City Barbecue Society master judge, having taken classes for judging and lending his well-trained taste buds for more than 30 events so far. Across the table was Wendy Wagster, a proud novice from Williams’ Princeton, NJ, office. Another team of volunteer judges (VIPs) fanned out across the grounds with score sheets, sampling meats in a particular category.

“This event is a major contributor to our overall budget for the year,” said United Way of Susquehanna County regional manager Tom Follert. “We are thankful to Williams for putting on such a great event and pulling together so many great businesses.” While it is Follert’s first year in the position, he has participated in the past as an employee with other companies. “I’m a believer that the ‘united’ in United Way is meant to stand for something, and this event is representative of that,” he remarked.

“This event is huge for Wyoming County. It’s one of our top corporate gifts that we get from anyone,” United Way of Wyoming County director Kristen Huff related. “We could not fund as many agencies as we do or help as many people as we do without Williams’ support. It’s a good time, and we’ve been blessed with great weather.” 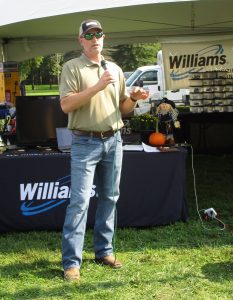 Prior to the announcement of the winners, Williams VP of regional operations Jack Walsh thanked the many Williams employees who contributed to the event, including two barbecue teams. He also expressed his gratitude to the members of the two dozen teams who arrived on Thursday evening to set up camp to begin the process of slow cooking their offerings for the midday event.

“As a board member of the United Way of Wyoming County,” Walsh stated, “I’ve been able to see where the money goes and how many people it helps.” In addition to their time and participation fees, Walsh noted that each team invests an ample amount on their own supplies.

Not every vendor provides food. Some put out baked goods, coffee and other beverages. Some collect business cards for the awarding of company merchandise. And others participate solely for the networking opportunities and to support of Williams’ efforts, proudly giving away hats, T-shirts and novelties to guests.

“We like that Williams not only helps meet the energy needs of the northeastern United States, but that they also serve the local communities along their network of pipelines,” said Rob Shoaf, president of Point Compression Solutions. It was PCS’s first year being involved with the barbecue, though sister company, Point Integrity Solutions, has been a big supporter of Williams’ fundraisers for more than a decade. Shoaf noted that the welcoming and assistance from the event staff and the ability to meet so many others in the natural gas industry was impressive. But his favorite part was “getting to eat so many barbecue team’s offerings in one setting.” 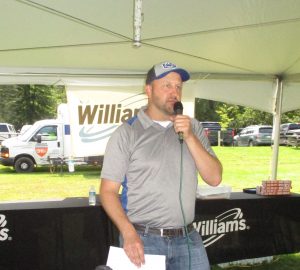 Williams’ Tammy Bonnice and Nick Lee shared emcee duties throughout the day, reminding guests to get their votes in on their favorite barbecue choices and to purchase raffle tickets for a variety of nice gifts donated by supporters.

“Everyone works together to make this the best of its kind in the northeast,” Bonnice remarked. “I can’t tell people often enough how proud I am to work for a company that cares not only for its employees but also the community and its people where we work and live.”

Williams’ fundraisers for the United Way are geared to the communities in which their employees reside. In addition to the barbecue event, Williams already conducted a 3D archery shoot and a softball tournament. On Oct. 7, Williams will conduct a golf tournament at the Towanda Country Club to benefit the United Way of Bradford County. Between all of the events, Williams will be giving funds to six different United Ways, not counting funds earmarked through employee contributions. 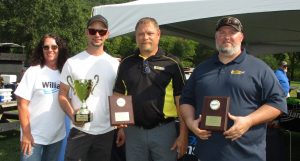 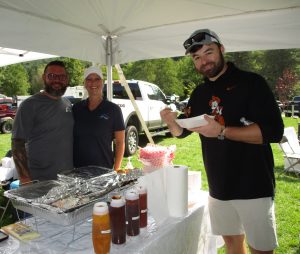 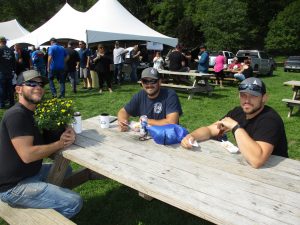 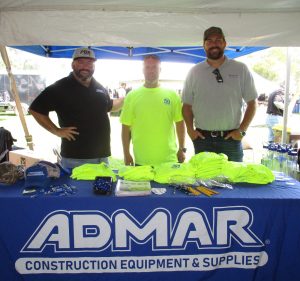 Representing ADMAR at the cook-off were (from left) Shane Kiess, Matt Cox, and Kyle Falkenberg. 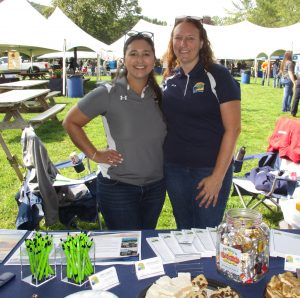 Angela Ganther (left) and Wedny Pely of ARM Group had an opportunity to talk to guests about their civil and environmental engineering services. 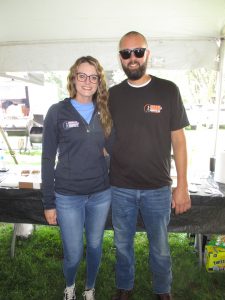 Jill VanDeMark (left) and Corey Podminick represnted both Arrow Surveying and Folsom Engineering at the barbecue. 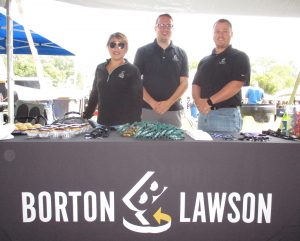 From cupcakes to key chains, the crew from Borton-Lawson, including (from left) Hanna Kormis, Cody Butler, and Bobby Cragel, had plenty of swag to share with barbecue fans. 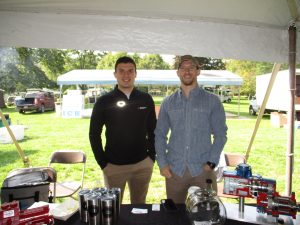 Alex Shema (left) and Brett Jones of Cardinal Valley Industrial Supplies were collecting business cards to give away prizes at the conclusion of the event. 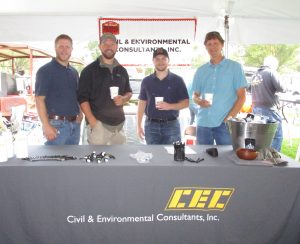 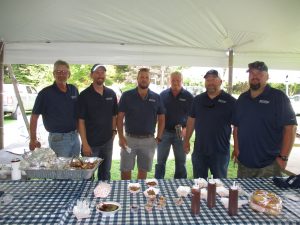 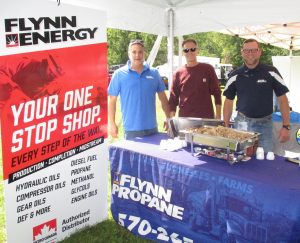 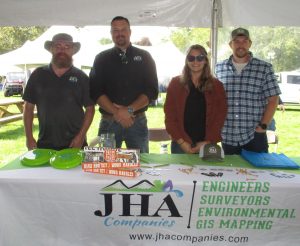 JHA companies was one of many engineering firms on hand. Greeting guests on their behalf were (from left) Ted Austin, Travis Long, Anja Whitehead, and Wade Weber. 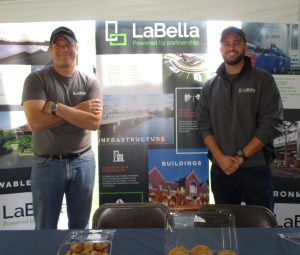 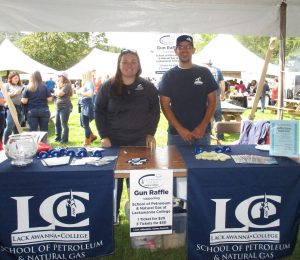 Representing the Lackawanna College School of Petroleum & Natural Gas at the Williams Barbecue Cook-Off was a new experience for instructors Hayley Rupakas (left) and Jeremy Yadlosky since the School moved to Tunkhannock in 2021. 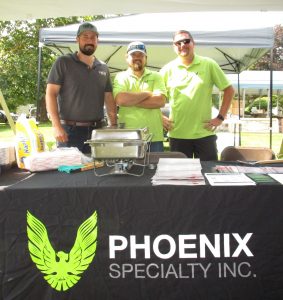 Cooks from Phoenix Specialty, including John Mishler, Brett Knapp, and Tim Nierstedt, catch their breath before dolling out the beef brisket that garnered them second place in the VIP-judging division. 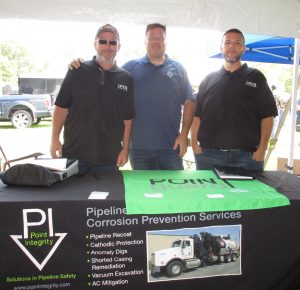 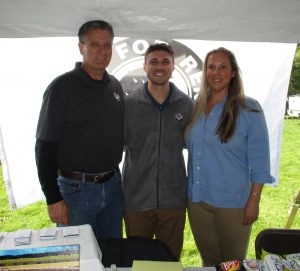 Rain For Rent employees (from left) John T. Hahn, Vince Rebar, and Rachel Barkofsky offered snacks and gave away prizes throughout the event. 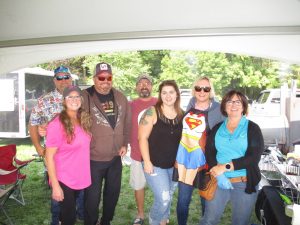 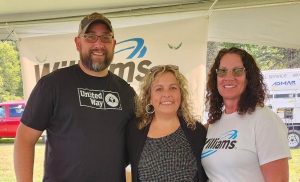 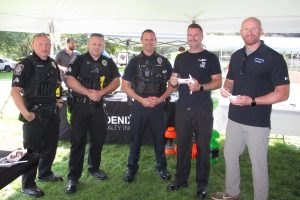 Tunkhannock Borough and Tunkhannock Township police officers, including (from left) John Zdaniewicz, Mark Papi, Dustin Cokely, Tim McCoy, and Ed Morristel, stopped by the barbecue cook-off and sampled some of the offerings. 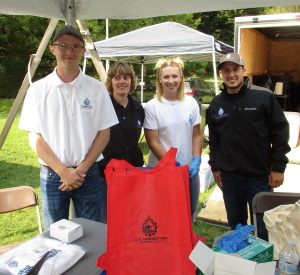 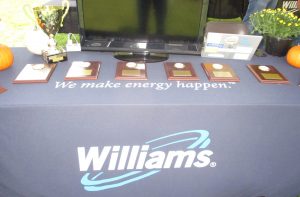 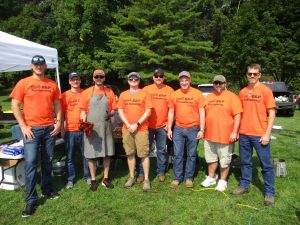 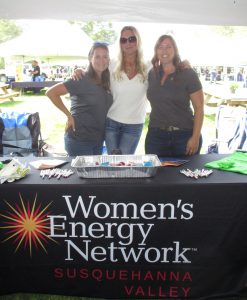