Muzzleloader Event Takes Locals and Visitors Back in Time

In: Living History
With: 0 Comments

The annual Endless Mountains Primitive Outdoorsmen’ Rendezvous drew hundreds of people to the American Legion grounds in Black Walnut this past weekend for muzzleloading, archery, and tomahawk throwing competitions and to give visitors a taste of what life in the Endless Mountains when the area was considered America’s western frontier. Below, Gary Yaeger of Montrose (left) checks out the wares in one of the Rendezvous’ many display and information tents on the grounds of American Legion Post 510 with EMPO member Nick Superko. 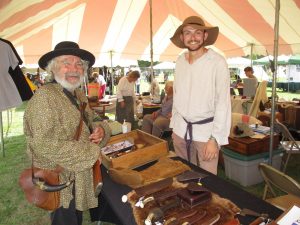 There were so many elements to the 14th annual Endless Mountains Rendezvous, Muzzleloader Shoot & Artisan Show held in Black Walnut, Wyoming County, on Sept. 10 and 11, that it was challenging to take it all in in a single visit. That’s why patrons of the event, which depicts the life of frontiersmen and their families prior to 1840, brings people back year after year and makes members out of patrons.

The Rendezvous, originated by the Endless Mountains Primitive Outdoorsmen (EMPO), started more than a decade ago at The Oldest House in Laceyville but outgrew the venue as more activities and interests were added to it. Now, it is one of four annual events held on the grounds of American Legion Post 510, where members also hold their meetings.

Members are primarily from the four-county Endless Mountains region of northeast Pennsylvania. Each selects their own role to portray the variety of people who settled in the area between the middle of the 18th and 19th centuries. Event participants also included a couple from Connecticut who – tongue in cheek – were here to stake their claim. Indeed, King Charles II of England had mistakenly granted portions of the future state of Pennsylvania to both citizens of Connecticut and followers of William Penn. The Yankee-Pennamite Wars raged and ebbed from 1769 to 1799 as land rights were disputed.

John and Sharon Mann of Connecticut found the rendezvous three years ago as the Covid crisis began to wane. The couple have been doing primitive camping for more than forty years, having met and married on the circuit. The fact that vaccines were required and safety protocol was mandated helped them feel comfortable with their decision. EMPO members helped them feel at home. “We found the people to be nice and friendly, so we joined,” John recalled. “It’s hard to find places in Connecticut that will allow events like this anymore – they don’t like the guns.”

“When we came here, these were the most friendly, open-hearted people we’d ever met at any event,” Sharon concurred. “I can’t say enough about them. Even the kids are wonderful. They dress the part and do all of the activities.”

The Manns introduced their son to primitive camping when he was five years old and, now at 45, he is getting his children into it. Sharon makes most of their clothing, including the popular capote – a native American coat-like garment that begins as a wool blanket and was adapted by early frontiersmen. Sharon is part Mohawk, so her attire is a blend of Native American and European settler styles.

“It’s all about what you want to make out of it. You find people with similar interests,” said John, who was taking turns with Sharon selling items from a trading blanket. “There’s a lot of talent here, including blacksmithing, trapping, gunsmithing, and cooking. Most of these people are more than willing to show you how to do what they do and what mistakes to avoid.” When you’re making leather pants, John cited as an example, “if you make them wrong, you only wear them once.”

Tim Button of Harford (seated, below) has also participated in primitive camping events for a large portion of his life. “I’m an avid history nut,” the long-time board member of Old Mill Village at New Milford proclaimed. He brought his daughter, Mariana, and playmate siblings Rachel and Hannah Clark of Spring Hill.

“I get to see my friends. I like to dress up and see all of the shops around,” Mariana said of various tents displaying and selling a wide variety of wares. “I’m going to be doing the ax throwing class today because I’m old enough,” the soon-to-be 8-year-old said proudly.

Tomahawk throwing was certainly the most anticipated activity among both boys and girls, followed by archery lessons at both a stationary target and on a 12-station “woods walk” that featured simulated hunting scenarios.

Shooting muzzleloaders was a key component of the rendezvous for adults, and range managers Dave Kupstas of Vernon and Henry Rahm of Meshoppen were pleased with the turnout on Sept. 10.

“We’ve got a good crowd here today with a lot of pistol shooters,” Rahm noted.

“In recent years, there has been a renewed interest in it,” said Kupstas, who serves as chief range officer. When asked if muzzle-loading is considered a sport, a past time, or a hobby, he answered, “It’s all of the above. We all use these weapons for hunting, reenactments, and target shooting.”

Fellow EMPO members Gary Yaeger of Montrose and James Burgess of Springville both have years of experience with muzzleloaders. “I’ve done it my whole life,” said Yaeger who, like Burgess, prefers the popular Thompson Center Hawken 45-caliber black-powder rifle. He has used the gun for hunting in the woods of Susquehanna County since 1973. 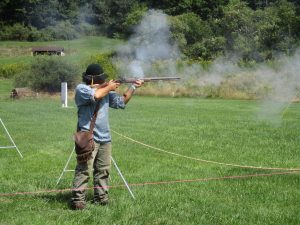 “I started hunting with this gun in 1986,” Burgess (above) related. “My grandfather bought it for me as a kit, and I got hooked on it.” He has taken 20 deer, including one buck, with the rifle.

Of the EMPO and the annual shooting events, Yaeger said, “It’s a great bunch of people. It’s well organized, and there are vendors from all over.”

“There’s a lot of people here who can teach you a lot of things,” Burgess added. “They’re all willing to help you.”

A group of teenage boys brought by their grandparents to the Endless Mountains Primitive Outdoorsmen Rendezvous from as far away as Lancaster, Pottstown, and Rochester, NY, hone their skills at the early American game of Triominoes.