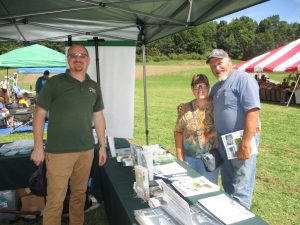 Prior to 1840, colonial settlers had to rely much more on each other to get by in the harsh environments of northern Pennsylvania. The Susquehanna River was indeed the western edge of the American frontier, especially for those striking out from New England to stake claims in the wilderness. Families united and grew out of necessity as they blazed trails and worked together to survive.

It’s fairly common, therefore, for participants in primitive camping events like the Endless Mountains Rendezvous, Muzzleloader Shoot & Artisan Show held Sept. 10 and 11 in Wyoming County to not only introduce new family members to this unique way of reliving and celebrating the past. But they also refer to those who return each year as an extended family. The event is one of four staged annually by the Endless Mountains Primitive Outdoorsmen (EMPO) at American Legion Post 510 in Black Walnut.

“The club members are family to each other,” said Teresa Edsell of Windham Township, who has been a member of EMPO since its inception. “We love getting out together like this and inviting the public here to see what it’s like. It’s relaxing.”

Teresa’s husband, Andrew, was running the nearby archery range which, along with tomahawk throwing, was very popular among youths in attendance. In addition to a stationary target, a new feature this year included a “woods walk” range with 12 stations simulating hunting experiences.

David Ling of Gillett has been attending primitive rendezvous events since he was four years old with his father, Joe, and agreed that the camaraderie and being outdoors is what brings him back. “I loved growing up in it, so I wanted to introduce my kids to it,” he stated.

Not too far away, Joe Ling, referring to himself as the resident Tory, was manning a recruiting station for King George to fill a regiment to put down the insurgence of disgruntled colonists that we know today the American Revolution. “The only true patriots were the Tories because they were loyal to the King,” said Joe, who gives presentations on the topic. “Of the white men who lived north of Scranton, 60 percent of them joined John Butler’s Rangers, a troop of Tories based in Niagara, NY.”

Joe was indicative of a number of intrinsic EMPO members who take on specific roles to portray the diversity of people and interests of the era. A couple from Connecticut not only conducted a trading shop within the encampment, they reminded guests that much of would become known as the Endless Mountains of northeast Pennsylvania was deeded to expansionists from Connecticut by King Charles II. After 30 years of skirmishes known as the Yankee-Pennamite Wars,  parcels of land already settled by people from Connecticut were officially proclaimed Pennsylvanian.

It’s that kind of information, paired with many preserved artifacts of the bygone era and the talents of craftsmen and skilled artisans at the Rendezvous that provide visitors, at every turn, with a new perception of life as it was.

Roxy and Dave Wells of New Albany are among long-time EMPO members who excel at setting up elaborate encampments that include sleeping quarters, a fully functional outdoor kitchen, and room to relax. Dave’s daughter, Autumn Tinna, was there not only in support of her father’s involvement but to show her own children what frontier life was all about.

“We like to see the different crafts the people make,” said Autumn. “It’s neat to know how people lived long ago. Life was much harder.”

“Harder work but simpler living,” her husband, Chris Tinna, suggested. “I think, in a former life, this is how I would liked to have lived.”

“I wish my son had come with me,” Brian Vnuk of Plymouth said of the 17-year-old he had not convinced to accompany him. “I love this area, and he would have loved the shooting, the tomahawk throwing and the set-ups.”

“I think that people are surprised at all of the of the things there are to see here,” founding EMPO member Robin Robinson said of newcomers to the Rendezvous. The events were originally held in Laceyville at The Oldest House, but the addition of new activities and crafts necessitated a move to a larger venue. Robinson cited the American Legion as “great partners” and the grounds as perfectly situated for members with room for even more expansion.

“Most people like the shooting, and the shooters are pretty much dedicated to what they do,” Robinson related. Like archery, the black powder range was a combination of stationary targets and a wood walk with 10 stations. “A lot of the general public does not know that they can come here to compete.”

According to EMPO president Alan Superko, 264 guests attended on Saturday and 52 on Sunday, despite persistent rains. Winners of various facets of shooting contests included Nicholas Manns of Montrose, Jake Burgess of Springville, Chris Teetsel of Lehman, and Sage Superko of Laceyville. Roxy Wells won the women’s division of the archery competition, and Ben Chamber of Wyalusing finished second in the men’s division behind Duane Miller of Mifflinburg. Miller also won the tomahawk throw. 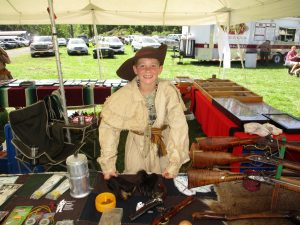 Gabriel Wolf of Standing Stone, a sixth-grader at Towanda Elementary School, was helping in the main EMPO tent. In his first year at the event, Gabriel was enjoying meeting people, learning about the past, and looking forward to give hatchet throwing a try. 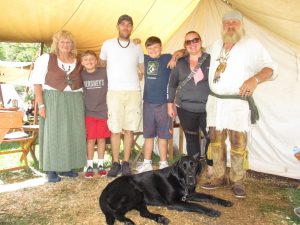 The Endless Mountains Rendezvous was a family affair for (from left) Roxy Wells; Eli, Chris, Gage and Autumn Tinna; Autumn’s father, Dave Wells and the Wells’ faithful canine, Tucker. The Wells live in New Albany, and the Tinna’s reside in Wyalusing. 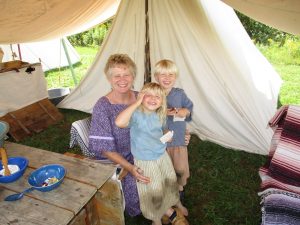 Teresa Edsel (seated, left) of Windham Township relaxes with siblings Lydia and Will Ling of Gillett. 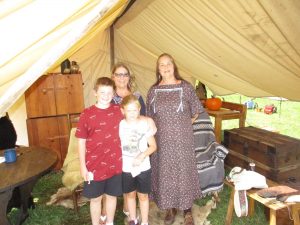 Sharon Mann (right) of Connecticut and her husband, John (not pictured), were happy to show off their well-accoutered camp site, which included a large canvas tent that they have used many times for winter camping with a wood stove in the corner piped out through a flap in the roof. Visitors on Sept. 10 included Peg Huyck (left) of Towanda with her grandchildren, Landon and Madison Hotaling of Wyalusing.