Tapping a variety of sources and accounts available to them, the Wyoming County Commissioners on Tuesday confirmed funding for a variety of projects and long-term endeavors while also announcing that they have received their first Opioid settlement and are seeking funds to aid efforts at Seneca Trail Park in Eaton Township.

The Opioid settlement is to be spread out over 19 years, with the county earmarked to receive approximately $100,000 per year beginning 2023. This year’s installment not covering a complete year resulted in a first payment, which can be used for a variety of treatment options, to be capped at $68,280.

“That’s only part of the settlement,” commissioner Tom Henry noted, in reference to numerous suits being taken up against manufacturers of the highly addictive drugs over the past few years. “One of the larger companies has not settle yet. So we should be getting more.”

The commissioners unanimously approved a resolution to reappropriate approximately $40,000 in leftover CBDB funds to aid in the upgrade of the water system at the Falls Active Adult Center in Exeter Township. Commissioner chair Rick Wilbur related that the water storage system no longer meets code, even though it did when it was installed.

In light of the Tunkhannock Area School District reimplementing the D.A.R.E. (Drug Abuse Resistance Education) program, the commissioners voted to transfer $2,780 remaining in an account from the last time the program was active to the District. The commissioners had previously tried to give away the money as prizes for an anti-drug poster contest but only received one entry.

The commissioners were ask if some of the available funds should not also be going to other school districts with students from Wyoming County, and they said that none of the other four have D.A.R.E. programs. While it is true that the Wyalusing Area School District, which services students in Laceyville, does not have such a program, Elk Lake School District superintendent Ken Cuomo confirmed that there has been an active D.A.R.E. program there for more than a decade, and it will start up again in January.

With the help of Rep. Karen Boback, the commissioners are looking into the possibility of securing some funds from the PA DCNR to be used at Seneca Trail Park, which the county took back from Eaton Township in recent months. Wilbur called the inquiry a preliminary search to see if funding is available and what might be some of the eligible uses.

“We’re very hopeful that we can find some money,” Wilbur remarked, adding that the DCNR currently has some extra money in its coffers and has been increasing assistance for other projects and to other organizations.

One of those organizations is the Endless Mountains Heritage Region (EMHR), which recently received $250,000 from the DCNR to help fund projects in Wyoming, Susquehanna, Sullivan and Bradford counties. EMHR executive director Cain Chamberlin was on hand to deliver an annual report to the commissioners that included some exciting news about a 2023 event to be held in the county.

Since 1998, Chamberlin related, the EMHR has appropriated more than $500,000 in grants to various Wyoming County entities, including the Nicholson Heritage Association, Howland Preserve, Seneca and Iroquois trails, Keystone College and the Dietrich Theater. He said that the EMHR also has its sites on the continued development of Seneca Trail Park and offered to assist the commissioners in their dealing with the DCNR.

In addition to the recent unveiling of the Endless Mountains Gravel Bikepacking Loop that traverses all four counties, the EMHR is planning a week-long kayaking sojourn on the Susquehanna River from Sayre in Bradford County, through Wyoming County, and on to Shickshinny. Perhaps the best news for the county was the announcement of a planned Endless Mountains Outdoor Heritage Expo at the Wyoming Fairgrounds next September.

Commissioner Henry brought up the fact that the EMHR did not receive any funding from Wyoming County last year, which had become routine. All parties chalked the missed year up to mutual oversight before Henry proposed restoring the annual contribution of $3,000 to the EMHR.

Chamberlin countered that contributions from the commissioners help them meet the 20 percent match needed to petition the DCNR for funding and demonstrate continued support of the organization’s efforts.

No News is No News

When asked about the status of Tyler Memorial Hospital, where most services, including the emergency room were discontinued at the end of June, Wilbur maintained that talks between Commonwealth Health and another healthcare provider are ongoing. “We are sworn to secrecy because they are still in negotiations,” he stated.

“It’s a daily concern,” said commissioner Ernie King. “We are well aware of the extra burden being put on EMS services in the county.”

“I kind of freak out every time I hear the scanner,” Henry said of the reality of local first responders taking a limited number of ambulances out of service for hours at a time to transport patients to Wilkes-Barre or Scranton. He said that he knows that representatives of the currently interested party have visited Tyler Hospital numerous times.

The Lake Carey Loop, a new triathalon event to be held in and around Lake Carey on Sunday, Sept. 18, has received tremendous support from the business community, and more than 50 entries have been received from across the state and beyond. There is still time to register for the event, which it is hoped with grow into a sanctioned race that will draw people to the county from across the country. (Click here for registration details: The Lake Carey Loop (runsignup.com)

Demolition of the old carriage stop in Eaton Township known as the Dana House should begin shortly after the commissioners accepted the bid from Popple Construction of Laflin of roughly $67,000. The work must be completed by Oct. 10.

Charlene Espenshade, executive director of the PA Friends of Agriculture Foundation and daughter of county auditor Judy Shupp and Dale Shupp, was recognized for an Aug. 29 podcast on the state of agriculture in the region. (Click here to hear it: https://podcasts.apple.com/us/podcast/pa-friends-of-agriculture-foundation-with/id1521308611?i=1000577714132)

Electronic recycling will be held at the Wyoming County Recycling Center along Rt. 92 in Tunkhannock Township this Saturday from 9 am to noon. Registration for a time slot is necessary and can be done by calling Mike Rogers at 570-836-0729 between 7 am and 3:30 pm on weekdays. (See list of eligible items and prices for drop-off below.) 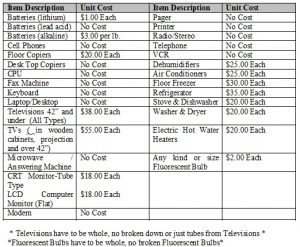