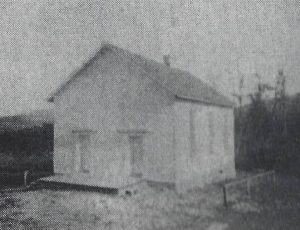 Rep. Tina Pickett (above, second from left) attended the summer anniversary picnic at St. John’s and presented a citation from the Pennsylvania House of Representatives to Rev. Bob Brown and long-time church members Frank Messersmith (left) and Nannette Good (right). The Lutheran church in Wilmot Township is now 150 years old.

Current and former parishioners of St. John’s Chapel of Shepard of the Hills Lutheran Church in Wilmot are celebrating a milestone anniversary, the building having served those in the southeast corner of Bradford County for 150 years. Nearly 100 people recently attended a special service and enjoyed a picnic in the pavilion of the church, which was originally dedicated in the Fall of 1872.

The church’s history goes back even farther, with a number of German families from Wilmot Township and the Dushore area of Sullivan County meeting at the home of John George Eberlin before constructing their first house of worship – a log cabin finished in 1851. Initially, the congregation was nondenominational and grew out of the Peace Church on Cherry Flatts near Dushore. “The one thing they had in common was that they all spoke German,” said Rev. Bob Brown, who settled into the Shepard of the Hills Church full-time in 2020. “As the numbers of each denomination grew, they splintered off to form their own churches.”

There were also mergers. The congregants of St. John’s Lutheran Evangelical Church and the Reformed Church became St. John’s Evangelical Lutheran German Church at about the same time as the construction of the church on Kisner Road on land donated by Eberlin, George Schock and John Schrann. Other names associated with the church’s founding were Messersmith, Morganstern, and Neuber.

The first in a long line of pastors was Rev. Carl Ludwig Erle. During his early years there, the original Peace Church was disbanded, and the parishioners of St. John’s, the Zion chapel in Dushore and Trinity Church in Mildred became a three-point charge, sharing one pastor. Services were conducted in German until the 1880s when members initiated a transition to services in mostly English. Rev. Erle was not fluent in English, so he retired and Rev. H. B. Strodach stepped up to the pulpit. 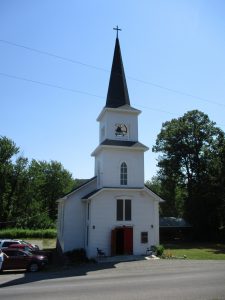 The next major milestone for the church building was the addition of a steeple and bell tower in 1892, aided by the efforts of the Women’s Working Association. From the 1940s to the 1980s, it was the Woman’s Working Society that coordinated most of the church’s fundraisers, which included making and selling quilts and hosting ice cream socials and an annual ham dinner, often in conjunction with the other churches in the congregation.

“Those profits were always poured back into the church,” said Nannette Good, a life-long member of St. John’s. Their efforts are still evident in the red carpeting, pew cushions, and the basement kitchen/fellowship room. Despite the addition of electricity in 1937 and electric heat in 1969, the main sanctuary appears much as it did 150 years ago. The stained glass windows, donated in memory of some of the church’s founding families and groups within the church, are breathtaking. 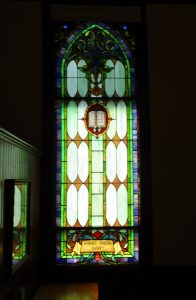 “The church has done a good job of keeping things up,” Jeannine Richlin remarked. She and her husband Mark came to St. Johns about 15 years ago after 18 years at the Zion chapel.

“It’s a very friendly church,” Mark said of St. John’s. Both agree that they enjoy Rev. Brown’s services but they were also fond of the pastors who came before him, including Reverends Reeser, Nilsen, Albers, Kaltenbaugh, and Pelletier.

When it was decided that the foundation of the Trinity chapel was beyond repair, it was torn down and most of its congregants moved to one of the two remaining chapels. One of those who made the move to St. John’s was Rosemarie Ottaviani, who has been part of the congregation since the 1970s. “It’s a very chatty church,” she said of St. John’s. “Everybody talks to each other.”

Few have been as intrinsically involved with the church as Nanette, whose family goes back at least three generations there. She, herself, was baptized, married her husband, Jim, and took her four children there through their respective confirmations.

Nanette’s mother, Kathryn Kuhnle Huffman was a choir member. Her mother, Blanche Messersmith Kuhnle played the organ from 1925 to 1970. Nanette and parishioners Shirley Norconk, and Twyla Gephart took turns providing music for services for the next two years until Nanette finished college. “I came back in 1972, and I haven’t left,” she says proudly. 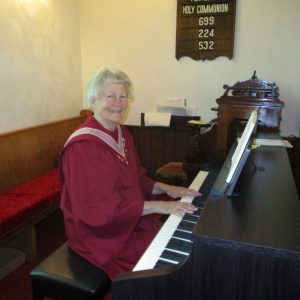 Nanette slides back and forth from the 1925 reed pump organ that her grandmother used to play to an electronic piano that was installed in 2015 that allows her to transpose hymns into a lower key. “People don’t sing as high as they used to,” she explained. Her favorite songs to play are “Here I Am Lord” and “A Mighty Fortress is Our God,” which Rev. Brown referred to as the unofficial Lutheran anthem, having been composed by Martin Luther himself.

The congregation of St. John’s has aged. There are no longer enough children to conduct Sunday school classes, and the choir was disbanded several decades ago. “There are kids, but I think we lost a generation,” Nanette suggested. “If the parents don’t come to church, the kids won’t either.”

She’s quick to note that she is not the only lifelong member of the congregation, citing fellow members Marion Messersmith, Lucretia Way, Sue Minarich, Marie Wheeler, and Frank Messersmith, who has served more than 35 years as the church council president.

Organizers of the July picnic to mark the 150th anniversary of the church were pleasantly surprised that a number of children were among those who attended the event.

“We hadn’t put much thought into advertising or promoting the event,” said Nannette. “So we were all kind of blown away by the attendance. It was phenomenal to see that many people come back. I had to laugh that it’s up to the holy spirit whether we see them again.” 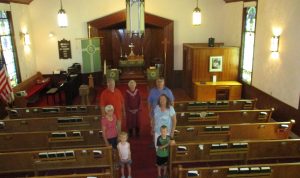 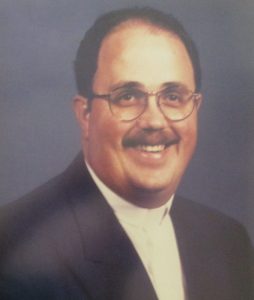 The fellowship room constructed between 1987 and ’88 was named Reeser Hall in honor of Rev. Richard Reeser, who served the church from 1979 to 1992. 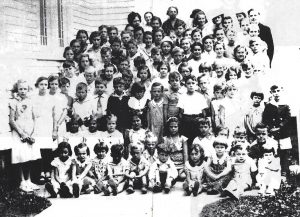 The number of children attending the church in 1937 allowed for a very well-attended Vacation Bible School in 1937. 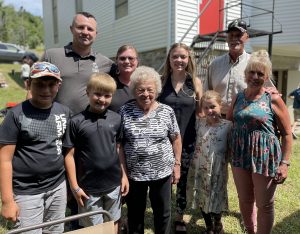