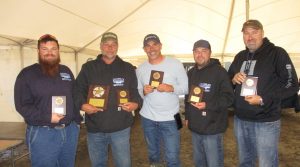 With her Williams teammates and coworkers at her back, including Kathi Smurkoski of Meshoppen (top, at far right), Meagan Oliver of Springville (left) takes her shots at one of 16 stations on the course at Hausmann’s Hidden Hollow. Smurkoski took second place among female shooters at the annual fundraiser. The winning team in the Sept. 22 Clay Shoot to benefit the Lackawanna College School of Petroleum & Natural Gas was Kozlowski Oilfield Support, represented by (above, from left) Ed Kozlowski Jr., Ed Kozlowski Sr., Kevin Hagadorn, Chad Gorman from GDS, and Donnie Griffith. The Kozlowski team took top honors last year on Course 2.

The woods of Hausmann’s Hidden Hollow near Friendsville were resounding with gunfire on Sept. 22 as 35 teams vied for bragging rights in a clay shoot tourney for the Lackawanna College School of Petroleum and Natural Gas (LC PNG). What sounded like a battle was a good-natured annual contest among individuals and companies that not only support the natural gas industry in the area but look to the College to supply much of the workforce needed to keep gas moving.

Ironically, due to some current gas activity near the Hausmann’s 110 acres, the tournament had to be modified from previous years to a single course with 16 stations. Five-person teams worked their way up and down pathways, shooting 100 rounds each at colorful clays projected skyward at a variety of heights and angles.

Waves of heavy rain moved through in the morning, slowing down the contest but certainly not preventing the shooters, most of whom are used to working outdoors, from completing the course. “The rain didn’t scare anyone away. And everybody has been OK with the extra wait time,” said Bill desRosiers, government affairs director for Coterra Energy (formerly Cabot Oil & Gas). He felt that the event was on par with previous years but added that there was more diverse participation from the industry as evidenced by new teams shooting and new sponsors. “It was encouraging to see the number of companies participating in the shoot returning to pre-covid figures,” he stated, “and we expect another increase in participation next year.”

The Sporting Clay Tournament was started about 10 years ago by Cabot to support the School of PNG in its early days when it was located in New Milford. The School assumed coordination of the event in 2018 and has conducted it every year since, except in 2020 at the height of the pandemic. Subsequently, the School outgrew its original venue and moved to Tunkhannock in 2021.

Coterra, Southwestern Energy (SWN), and Williams continued as Top Gun sponsors for the event, and new companies come on board every year to cover the cost of signage, ammunition, food and other important elements. A key new sponsor this year was EQT Corporation, which recently entered the region with its acquisition of Alta in Lycoming County. EQT’s generous support helped expand the popular gun raffle and supplied many of the firearms that were won by ticket holders after lunch.

“This is unique. None of the other events have such great support from all sides of the industry,” said Lackawanna College vice president of external affairs and special projects Brian Costanzo. “All the companies know that they are supporting a good program.”

“It’s our largest fundraiser we have, and it goes to one of our most important programs,” Lackawanna College president Jill Murray explained. “It’s a model that we use for other fundraisers,” citing a gun raffle and shooting contest for the College’s police academy at Camp Freedom as an example.

While most teams were comprised of staff from a single company, others were made up of employees from several companies who simply wanted to shoot. Zach Conrad of New Milford is a completions engineer for Coterra who was competing with two employees each from WorkOver Solutions and Keystone Clearwater. Teammate Danny Wilson was the second place male shooter for the event. 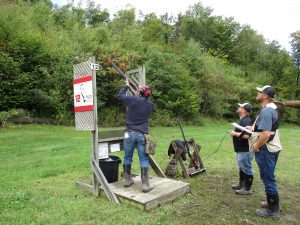 Zach (above, left) got his background PNG education at Marietta College in Ohio but has become a big fan of LC PNG. “Lackawanna College has way much more to offer, especially from an equipment standpoint and hands-on experience,” he stated. “The resources that they have there are incredible.”

Meagan Oliver of Springville was shooting for one of four teams sponsored by Williams. She was a 2014 graduate of LC PNG who interned at Williams and was recently promoted from an operations technician to a safety and health specialist. “Getting the internship was a really big benefit,” Oliver related. “Getting the general knowledge of the industry at the School was very helpful, as was the hands-on experience.”

One of her teammates that day was Kathi Smurkoski (below, right) of Meshoppen, who has been with Williams for 10 years as an environmental health and safety manager. Smurkoski is an experienced hunter, but this was her first time clay shooting. “I wasn’t sure that I’d hit any, but I’m doing OK,” she remarked before breaking two clays in the next round. She finished second place among female shooters for the day. 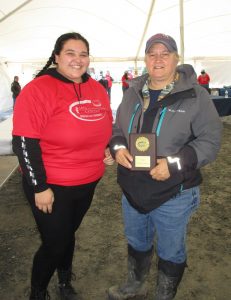 Justin Paglianite of DT Midstream of New Milford Graduated from LC PNG in 2017, and provides pipeline maintenance. “I got an internship, and I just stayed on,” he said of his time with the company.

Participation of alumni made the clay shoot all the more meaningful for LC PNG curriculum/education coordinator Hayley Rupakas. She graduated from the school, worked in the fields and then was called back by the School to be an instructor. “It has been so nice to talk with people I’ve worked for and worked with and to see where they are in their careers,” she stated. Rupakas coordinated the participation of current students, who got up at 3 am to help with the event – setting up, driving shooters around in golf carts, emptying garbage cans, and picking up thousands of spent shells after the event.

“The best part is seeing the students interact with the industry,” Costanzo noted. “It’s an opportunity for them to freely go out and introduce themselves. It’s like their first interview.” 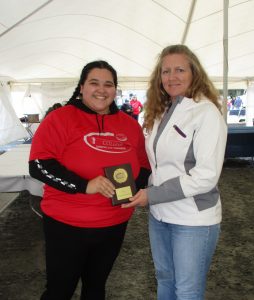 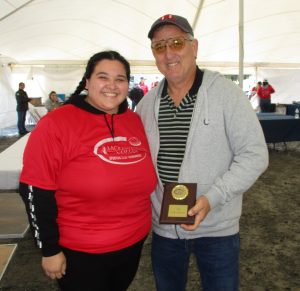 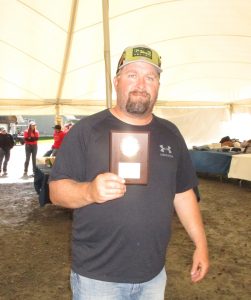 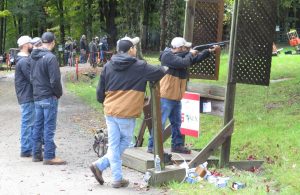 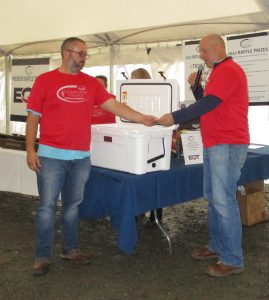 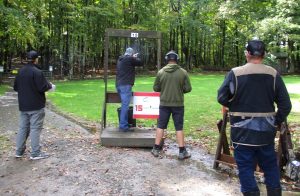 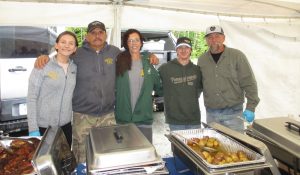 Greenley’s Barbecue are annual supporters and provided a delicious lunch for clay shoot organizers and participants.