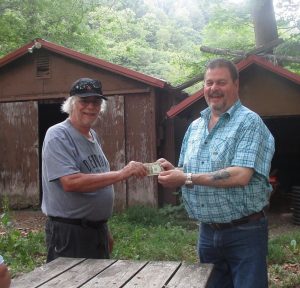 Volunteer Danny Coolbaugh (top) moves what remains of dead ash trees in Seneca Trail Park that were cut down for safety reasons. Above, Eaton Township supervisor Paul Rowker (left) symbolically gives one dollar for a one-year lease on the park to Wyoming County commissioner Tom Henry.

It’s hard to drive past the former Roadside Rest Park on Route 29 south of Tunkhannock these days and not notice how clean and open it is, compared to what it looked like during its years of closure. “Clean, open, and ready” are the primary goals of the band of volunteers that have stepped up to reopen the park to the public.

The green space that was so popular among local families for several decades has a new name – Seneca Trail Park – and some ardent new supporters. Members of the Seneca Nation, for whom the bank along a bend in what would eventually be named Bowmans Creek was once a medicine village, consider it to be sacred ground. The 24.6 acres are adjacent to the Seneca Trail, which loosely parallels Route 29 from the Monroe Township line to the Susquehanna River.

“I was so happy to get that email,” Gere Reisinger (below, left), a member of the Seneca Nation and a local coordinator of Native American affairs, said of learning from volunteers about their plans and the new name. “We’d love to have a powwow here.” 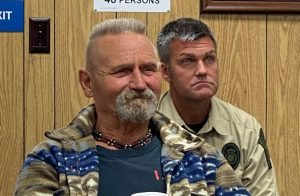 Local coordinators of the grassroots efforts to get the park open and maintain its accessibility include Linda Coolbaugh and Dawn Rogers, who have been working closely with the Eaton Township Supervisors, the Wyoming County Commissioners, and PA Fish & Boat officer Pete Napoli (above, right). A consensus was reached in the spring that the township would lease the park from the county for one dollar per year while the volunteers work to clean it up and take turns maintaining a presence there.

The old Roadside Rest sign along the highway was removed, and new signs have been put up to alert visitors to the park of temporary new rules. Fires, swimming, pets and alcohol are currently prohibited. Park users are asked to take home with them anything that they bring to the park, as trash cans are not available.

Organizers acknowledge that the rules appear to take away from the park many of the elements that made it so popular, but each regulation addresses a liability issue. Also, neither the township nor the county has the room in their budgets to invest in additional services at this time.

It is important to the volunteer group for the public to know that no tax payer money is being used for cleanup or development. Upgrades will require both monetary and material donations, however, and several individuals and businesses have stepped up to provide needed items or offered to make them available. Additional signage is on the way, including a new road sign, and park rules signs in Spanish.

Over time, usage of the park is likely to evolve, and rules will be adjusted accordingly. Eventually, the fields might be utilized for sports practices and events, but those changes may be years in the future. The volunteer group would like to form an officials Friends group to better manage the space. Approval of the 501c3 status for tax exemption requires a solid plan, which requires additional public input.

Interest in the project by Reisinger and Iroquois National cultural ambassador Pat Quinn has been well-received and should help with the non-profit designation. They are interested in coordinating events there that would establish an educational component in the park.

“What we’d like to do is recognize the beautiful area that you have here and add our recognition of how historically important it is,” Quinn stated at a recent meeting.

“What we’re trying to do is educate all the children here on what we call the ‘Southern Door’ of the Seneca Nation,” Reisinger added. “We called it our paradise because we had all of our council meetings here.”

Reisinger is certified in pathological medicine and grows herbs on a farm situated at the crux of Eaton, Monroe and Northmoreland townships. “The Eastern Seneca were famous for their medicine society because we grew the most potent herbs,” he said of continuing a family tradition. Another important aspect of the council meetings held in the area centuries ago were friendly lacrosse games, and Reisinger would like to bring the time-honored sport of Eastern Woodland Indians back to the park.

“Things are moving. The people who we need to communicate with are already in contact,” Reisinger stated, adding that a dedication ceremony involving Seneca peoples at the park is likely in October. He has also reached out to Seneca artist Carson Waterman, who designed the Seneca Trail signs, to create a new road sign for the park. “We want to be sure that the sign tells a story,” Reisinger related.

In the meantime, more public support is needed – especially volunteer workers to help continue the work that has been started. More picnic tables are needed, and another more extensive cleanup is planned. The large number of people who have participated in cleanups so far have been greatly appreciated, Coolbaugh stated, but relying on the same people to come back repeatedly is impractical. “We’ll always need more volunteers,” she remarked.

The next meeting date for the committee is Tuesday, Aug. 24 at 7 pm at the park. The meeting will be held inside the Eaton Township building if it rains.

The township has established a separate bank account for the park project, and local residents may make checks payable to and mail donations to Seneca Trail Park c/o Eaton Township, 1331 PA-29, Tunkhannock, PA 18657. Questions and offers of assistance may be directed to the Eaton Township office at eatontwp@ptd.net or 570-836-3725. 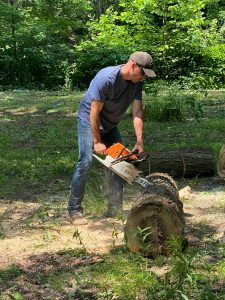 Above, Tom Harvey, one of many volunteers to assist with park cleanup, cuts up downed ash trees to make them easier for removal.

Click here to read about involvement of the Iroquois people in the 2015 dedication of the Eatonville foot bridge on the Seneca Trail: