In: Uncategorized, Weather Events
With: 0 Comments 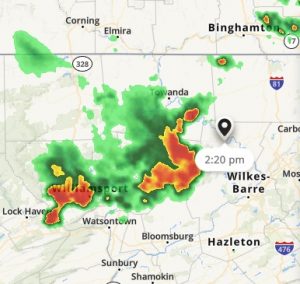 Posting on Weather.com Above) indicated that heavy thunderstorms might develop over Bradford and western Wyoming counties between 2 and 3 pm.

Bradford County’s ‘Weather Wizard’ Wayne Venderpool agreed. The storms picked up speed very quickly and tore through a swatch of the middle Endless Mountains between 1:30 and 2:45 with varying results.

Some were hit hard and sought cover. Some were thankful that the rain broke summer’s sizzle. And others who were not impacted by the storms at all expressed their disappointed at the fizzle.

“I was taking rack cards and poster to Grovedale Winery (Wyalusing) for our Rotary Wine Fest and got caught in the storm,” Ron Furman commented. “’Never drove through a storm like that.”

Several people reported dark skies but little rain between Cherry Township in Sullivan County and Forkston Township in Wyoming County, as well as a swath between Standing Stone Township in Bradford County and Lawton in Susquehanna County.

Apparently, the storm followed the winding river valley, as they often do. Mike Lloyd of Meshoppen reported heavy lightening hits. An area between Laceyville and Russell Hill in Wyoming County seemed to take the brunt of the storm. Brabara Tindell in Dark Hollow reported heavy wind and a 10-15 minute downpour. Many trees and branches were down on Meshopany Ridge.

Marie Weaver sent us the photo (above) of her view of a suspicious-looking wedge-like cloud as she was driving north on Rt. 29.

Temperatures are expected to linger in the lower 70s tonight and rebound to the 90s for one more day tomorrow.