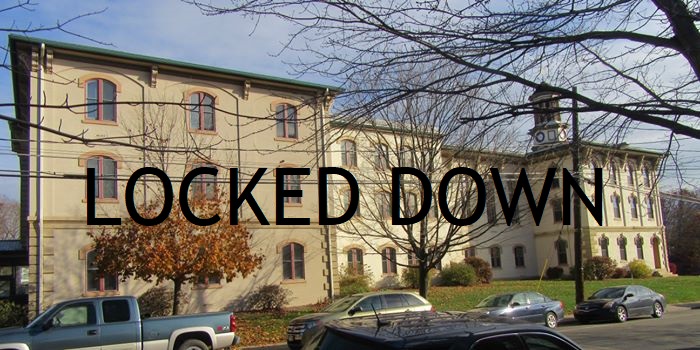 After comments surfaced on Facebook today of a possible lockdown at the Wyoming County Courthouse in Tunkhannock because a man carrying a gun in the vicinity, EndlessMtnLifestyles.com reached out to the commissioners for more information.

Commissioner Tom Henry confirmed that indeed the courthouse was locked down shortly after 9:30 on Thursday morning after an employee of a nearby auto dealership phoned 911. A male who stopped into the car dealership told the employee that he had a firearm in his possession and that he was headed to the county courthouse.

“The Sheriff’s Department did a phenomenal job of doing exactly what we’ve been told to do under those circumstances,” Henry related. Sheriff and Probation Department employees took up positions at the doors of the courthouse, and a police officer was stationed at each of the corners on Courthouse Square watching for the blue vehicle described to the 911 dispatcher by the auto dealership employee.

“The situation was resolved,” Henry stated, though he could not provide more details as he had yet to get an updated briefing from the Sheriff’s Department. “In all my years of being in the courthouse, this was the first time we’d ever had a lockdown.” Henry estimated that the building was closed for about an hour and a half.

An active shooter drill at the courthouse has been planned for quite awhile and will take place in September, Henry noted.