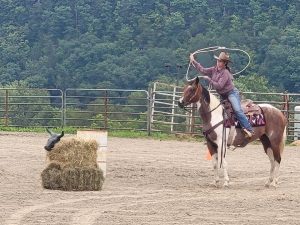 Sondra Fallon (top) of Kingsley works her finishing horse, Levi, through brush as part of the Trail class. Above, Tammy Tyler of Lenoxville demonstrates her roping skills from the back of Jitterbug. Below, Saige Bach of Auburn Township presents the American Flag during opening ceremonies at the Aug. 7 Ranch Riding competition conducted by the Endless Mountains Riding Club. 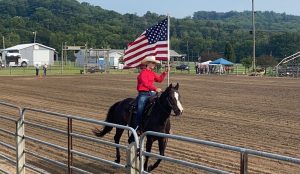 The Endless Mountains Riding Club (EMRC) conducted a full-slate ECCRA-sanctioned Ranch Riding competition at the Wyoming County Fairgrounds on Saturday. The event was the fourth of nine on EMRC’s 2021 calendar, providing opportunities for riders from Susquehanna County and four other member counties to demonstrate the progress they are making with their horses. Sixty-three riders filled 270 slots on the event roster. It was the second largest ECCRA-sanctioned show for the club to date.

“We’ve had great turnouts,” said Sondra Fallon of Kingsley, an EMRC board member and contestant. “Last year was our first year, and there has definitely been an increase in participation this year.” Contestants on Aug. 7, she noted, came from as far away as New Hampshire and Maryland.

Sondra was working with two horses, including Duke, considered a “green horse” because he has participated in less than 10 shows. The green class is non-ECCRA-sanctioned and considered a stepping stone to a more advanced level of competition with seasoned horses. “This is only his second show,” she explained. “He’s doing really good today and keeping his little baby brain in check.” 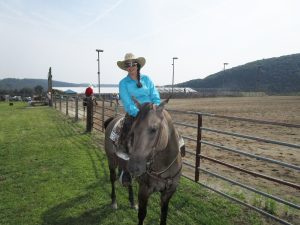 Not only is Duke (above) a bit inexperienced in the arena with other horses, Sondra explained that he’d only been off the farm a couple of times. Moving the horses in and out of trailers and into strange stalls at new venues can be stressful for the younger horses. “It’s really important to create good experiences for him,” Sondra stated. Duke finished first that day in all of his classes.

Saige Bach from Auburn Township was one of the younger participants, and she was riding a much older horse. The Elk Lake High School freshman started lessons nine years ago, and is in her fourth year of competition. She was working with 18-year-old Rooster, whom she acquired last year. 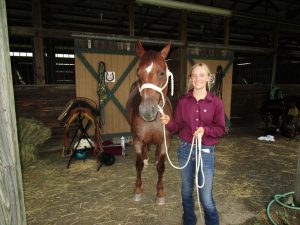 “Since I got him, he has a lot more personality and is more comfortable,” Saige (above) remarked. He is placing higher too, recently garnering a blue ribbon in barrel racing and improving in sorting events. “We haven’t done reining yet, but I want to try that.” Reining is sort of like figure skating for horses, guiding them through a precise pattern of circles, spins and stops.

Tammy Tyler of Lenoxville is working her way up through the ranks at EMRC events. She pretty much grew up on horseback, as her mother always had horses. Tammy and her children now board their horses at Elk Stables, where there is abundant outdoor space to practice and enjoy trail riding. On Saturday, she was riding a five-year-old paint mare named Jitterbug who Tammy started training under saddle two years ago.

“I started off gaming her at a walk/trot that year at the Friday Night Lights gymkhana series hosted by Jaime and Jim Bartles at Blue Stone Acres,” Tammy related. “Every year, we have been gaining speed at this series.” Saige has also gained a lot of experience at events conducted by the Bartels, who are EMRC members and have a venue near Meshoppen.

Jitterbug was also introduced to Ranch Sorting last year, which pits a team of two riders against the clock, while they work in harmony to cut out the correct cows from a herd and drive them to a pen. “She did unexpectedly well for never being around cattle,” Tammy said of Jitterbug’s performance at the EMRC sorting events. “I really enjoy it because it is geared more toward preserving the natural working movements of our horses.”

On Saturday, Tammy and Jitterbug took second place in the Ranch Roundup class, a third in Ranch Trail, and a sixth in Ranch Pleasure.

The heat and humidity were climbing rapidly on Saturday, and riders dressed in full competition regalia were taking the brunt of it. According to EMRC president Jacqueline Hunter, the performance of the horses is generally unaffected by the heat if they have been trained on hot days.

The EMRC was formed last summer in response to the COVID pandemic and the cancellation of most equine events, and its membership is steadily growing. “It’s wonderful to have competitive shows to help everyone grow as horse men and women, and we love to see the kids talking and supporting each other,” Hunter stated. “The competition at these shows give them time to help and build each other up. We strive as a club to help reinforce this atmosphere.”

Riders of all ages are welcome to join the club and participate in its events, and Hunter has seen an increase in the number of adults who have taken to horse riding as a new hobby. “We have a novice class for people who want to get into the sport,” she related, noting that between seven and 15 riders compete as novices at each event. “Especially coming out of COVID,” Hunter added. “It’s something they could practice at home and do locally outside.”

An aerial view of an EMRC horse show in the equine arena at the Wyoming County Fairgrounds.