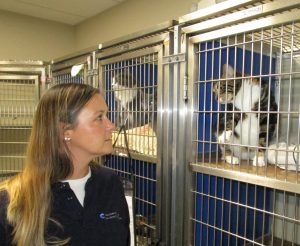 Marking the delivery of more than 2,100 pounds of dog food and cleaning supplies to the Griffin Pond Animal Shelter on July 29 are (top, from left) Chad Gorman and Gino Setta of GDS, shelter dog attendant Dylan Metzger, shelter adoptions counselor Catie Haupert, and Jeff Lieri of Western Environmental Liner and Diamond L Supply. Above, one of many cats at the Griffith Pond Animal Shelter needing a good home gets the attention of GDS human resources manager Luanne White.

When GasSearch Drilling Services (GDS) foreman Gino Setta read a call for help on the Griffin Pond Animal Shelter Facebook page, he could sense the urgency among staff members who were overwhelmed with an influx of dogs to the facility in Clarks Summit. That was a Sunday evening. The next day, Gino approached GDS operations manager Chad Gorman to see how GDS might be able to help.

“We all love animals,” Gino said of him and his co-workers. “Chad and I have both served on boards of animal rescues.” Gino’s family routinely fosters dogs from the Griffin Pond shelter.

Chad gave Gino the green light to start making calls to vendors who had stepped up with assistance during other times of crisis. Within 48 hours, GDS (a wholly-owned subsidiary of Cabot Oil & Gas Corporation), Western Environmental Liner, Diamond L Supply, Admar Construction Supply, and Kozlowski Oilfield Support came up with 2,100 pounds of dog food, as well as much-needed supplies for cleaning and disinfecting, valued at more than $7,000.

Initially, the supplies amassed at the GDS office were supposed to be moved to the shelter on a flatbed truck. When the weather forecast indicated a likelihood of rain, Jeff Lieri of Western and Diamond L arranged for the rental of a box truck to keep the donations dry. They were delivered to the shelter on Thursday morning, much to the delight of employees like Catie Haupert, Griffin Pond’s adoptions counselor. “It really means a lot, especially with everything that’s going on right now,” said Catie. “We are full. We are definitely at capacity.”

What’s going on is that the number of animals being rescued from hoarding cases – instances where a person has accumulated more animals than they are able to provide adequate care for – has skyrocketed. Often, the intentions of the people are good, but the burden of hoarding leads to deplorable conditions for the animals, malnutrition and dehydration, and illnesses.

“We always cringe when we hear that word in the animal rescue world,” Griffin Pond executive director Ashley Wolo remarked. “It’s sad for both the people and the animals involved. They just get overwhelmed. When we step in, its usually at the point where there’s nowhere else for them to turn.”

Quite literally, every space at the Griffin Pond Animal Shelter, including personal offices and a large community room, are filled with dogs. Double occupancy in cages designed for single cats has become the norm. The overflow has made quarantining animals difficult, as well as getting veterinary help for all of the animals that need it.

“It’s hard now because every shelter and rescue in the area are filled,” Ashley explained. As the pandemic eases and people are getting back to work, she added, “We’re seeing a rise in surrenders and less adoptions. But, regardless of the timing, we have to make it work. These donations could not have come at a better time.”

With approximately 40 employees and another 15 to 20 regular volunteers, the pace of cleaning, feeding, and getting all of the dogs that are able out for regular walks is mind boggling. The visitors from GDS remarked at the pace of workers rushing past them in the hallways, not unlike what one might expect to see in a hospital during a disaster.

“What they do here is amazing,” said GDS human resources manager Luanne White, who noted that the shelter is practically in her backyard.

“We’re always willing to do whatever we can to help,” Jeff said of his company’s support for Griffin and other animal shelters. Western and Diamond L alone accounted for 860 pounds of dog food and supplies delivered that day. Jeff and his wife have three rescue dogs at home and recently took in a stray kitten they found. “Our hearts go out to the animals and the people who take care of them.”

“The staff we have here and the volunteers are incredible,” said Ashley. “They deserve all the credit in the world. We have to be prepared for anything that walks in the door.”

“It’s one of the most emotional jobs that you can have, but it’s also the most rewarding,” Catie stated. “I’ve gone home crying many nights and told myself that I can’t go back. But I get up the next morning and go to work because these animals need us.”

“I think that what keeps us going is seeing the transition in the animals and seeing them find good homes,” Ashley concurred. “There are hard days and there are good days. We have to keep remembering that.”

Chad Gorman credited Gino Setta for his attention to the matter and for spearheading the two-day drive for contributions. “It goes to show that we are more than oilfield workers,” said Chad. “The people that work for us here and in the surrounding counties are members of the community, and we love to give back.”

According to Ashley, Griffin Pond Animal Shelter is also in need of more people. “There’s so many things to be done. The more hands on deck, the more that we can do, including educational programs,” she stated. “It helps alleviate a lot of things that we have to do on a daily basis.”