In: Youths in the News
With: 0 Comments 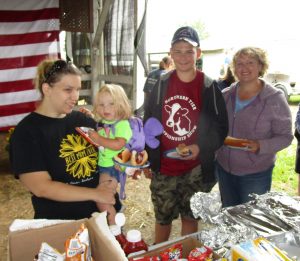 Allana Warner (top, left) of Montrose pauses with Williams employees Chad Johnson and Caleb Darling (right) and her cow, Cotton Candy, who had already picked up some impressive wins before heading back to the arena for a showing in the Senior 2-year-old division. Putting the fixings on their hot dogs are (above, from left) Erika Derhammer of Monroe Township, Wyoming County, with daughter Raelynn, James Grisafi and his mother Jennie Grisafi of Montrose.

The Harford County Fairgrounds played host to the annual Northern Tier Holstein Championship and Red & White Shows on July 29, providing local youths and those from surrounding counties an opportunity to parade their diary cattle around the livestock arena several weeks before the upcoming Harford Fair. Showing cows that outweigh their handlers by hundreds of pounds is a great way to work up an appetite, and Williams Companies was happy to be on hand to serve a free lunch for contestants and spectators.

Williams employees Chad Johnson and Caleb Darling were flipping the burgers and hot dogs as quickly as they could, along with help from family members and friends who had volunteered for the event. Both grew up on farms in Benton Township in northern Lackawanna County. Chad has applied for a Williams Homegrown Grant several years in a row now, making Williams a key contributor to the event.

“Most of the Williams people who come here grew up on farms,” Chad remarked. “This is obviously near and dear to my heart.” With wife, Peanie, and son, Beau, along for the fun, Chad noted that it is important to him that dairy farmers and their children be recognized for their hard work and determination, especially during a time when the odds often seem stacked against them. His family still milks about 100 head of cattle per day at their Amasa Hill Farm.

“Being part of the community is what Williams and its employees stand for,” Tammy Bonnice of Williams stated. “We are surrounded by farmland that has been passed down from generation to generation. I’m so glad that Williams was able to support this again this year.” In addition to the food, Williams provided event prizes and gifts for the youth showers, a contribution totaling $2,500.

“It means a lot when large corporations support small farms,” Caleb concurred. “Williams is a very generous company.” The Darling’s farm has been run consecutively by Caleb’s grandfather, Paul, and his father, Mark. Caleb has never shown livestock, referring instead to his primary job on the farm as “tractor driver.” Dave Peck, a good friend and hired hand from the farm, was assisting the Williams crew with lunch preparation.

Participants hone their skills in a variety of ways. Some raise their cows from calves, and others buy cows and keep and care for them at nearby farms whose owners lease space to them to provide opportunities that they might otherwise not have. The Susquehanna County farming community forms an extended family, and 4-H has become a way of life. Competitions like the Northern Tier Championship help build confidence in like-minded youths who freely share their grooming and showmanship techniques. 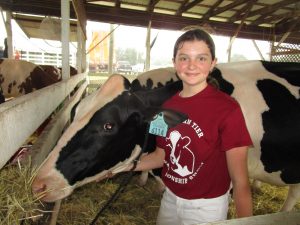 Grace Rinaldi’s grasp of livestock terminology is impressive for any teenager, let alone an 11-year-old from Northampton County who has only been showing for two years. By lunch time, she had already collected a first place youth ribbon and second place in the open class with her winter yearling. “I like being with all of the animals, and I like spending time with the ones I love. Her cow, Sasha, whom she’d bought a year ago, was her good luck charm that day. “She has a very straight back, she’s very correct in the back quarters, and she stands nicely on her legs,” Grace (above) explained.

Victoria Clark (below) of Springville was doing well with her winter calf, Strawberrry Wine, garnering blue ribbons as the Junior Champion of the Youth and Red & White Open shows, as well as Reserve Junior Champion of the Holstein Show. As a recent graduate of the Lackawanna College School of Petroleum and Natural Gas, she has aged out of the 4-H program and is now a 4-H leader. 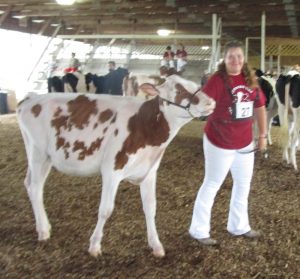 Chad was impressed by the size of the crowd, which included 82 cows. “With COVID waning, everybody is looking for this type of event,” he remarked. Chad’s brother, Adam, helps to coordinate sponsorship for the competition and elected on this day to help Chad at the grill, even though he often shows cattle himself. 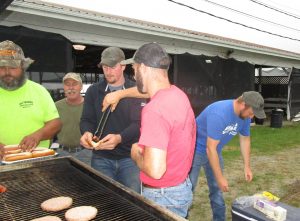 “We really appreciate that Williams does this for us,” said Frank Supancik of Gibson Township. Frank started showing livestock, including sheep, in 1969. He is recently retired as a 41-year director of the Harford Fairgrounds. He is still on the grounds regularly, especially when his grandchildren, like Katelyn Supancek of New Milford, are showing animals.

“This is a great event that shows the pride of showmanship among many of our farming community folks,” Tammy remarked. “I love sitting back and watching as all of the participants show support for each other.”

The Northern Tier Holstein Championship was overseen by the Pennsylvania Holstein Association. Lloyd and Denise Pease served as co-chairs, and Joe Nash of Lydonville, NY, was this year’s judge. 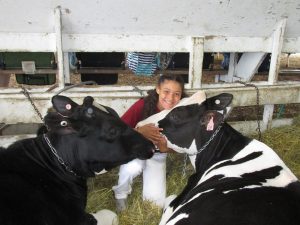 Celeste Clark of Springville has a tender moment with Ellie Mae (right) and Splish Splash, after Ellie Mae had claimed a second place ribbon. 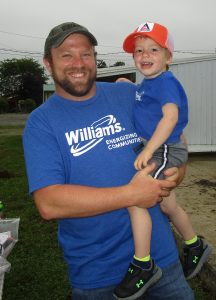