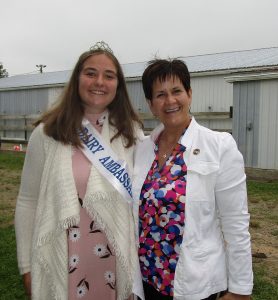 4-H youths and their families got the livestock showing season off to a good start on July 29 with the annual Northern Tier Holstein Championship Show. Held at the Harford Fairground, the event routinely attracts dairy farmers of all ages from Susquehanna County and beyond. This year, 82 cows were paraded in front of judge Joe Nash of Lyndonville, NY. Lloyd and Denise Pease of Sweet Peas Farm served as chairpersons for the show, which was sanctioned by the Pennsylvania Holstein Association.

“It’s the first show of the year, and they are excited because they are showing their owner-breeder animals, which means they were born and raised on our farm,” said Dana Empet, as she lined up her three prize-winning children (below) for a photo with their cows. “We’re excited to be back in the show ring,” she continued. “Hopefully, it’s a return to normalcy between 4-H and the Harford Fair being back.” Empet noted that the 4-H Dairy Round-Up was scheduled at the fairgrounds on Saturday, and the Harford Fair is just a few weeks away. 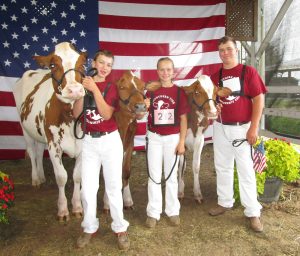 For many of the participants, showing cattle is a family tradition. In addition to the owner-breeder showers, many participants show livestock on behalf of larger farms. A number of local farm owners also allow 4-H youths who do not live on farms to lease space for their animals and practice their showmanship with their guidance. While the competitions are meant to be a fun experience for them, they also take the competitions seriously and reap the rewards for their efforts.

“It gives them a chance to go out and compete at something that they have worked hard at for the rest of the year,” Nash remarked. “And they get to socialize with and meet people who have a common interest.” Nash was a 4-H member as a youth and has shown cattle most of his life. About four years ago, he was asked to judge a few dairy cattle contests and his involvement has increased. “It’s the best seat in the house for evaluating and seeing the animals and being able to place them in order,” he said of his place in the ring. 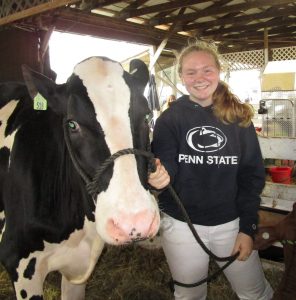 While Katelyn Supancik (above) has been showing livestock for nine years, this was the first time participating in the Northern Tier Championship Show. Katelyn is a Mountainview High School graduate who has enrolled at Penn State University to pursue a degree in communications. She was showing a summer yearling heifer named Margarita for Josan Farms of Kingsley, where she leases space for her own livestock projects. Her father, Robert Supancik, used to show for Josan as well. In addition to Holsteins, Katelyn shows sheep, swine and steer, the latter being her favorite farm animal to work with.

Celeste Clark, a student at Elk Lake High School was showing Ellie Mae, who took second in her class, and Cheyanne, who took a fourth place ribbon, for Kozy Kountry Farms in Springville. Celeste has been showing for five years and enjoys the rigors of working with the animals and practicing her showmanship. And she couldn’t help but admit that she likes winning ribbons.

Victoria Clark of Springville was working with her winter calf, Strawberry Wine, whom she has raised. The calf was racking up the wins, taking Junior Champion of the Youth and Red & White Open shows, as well as Reserve Junior Champion of the Holstein Show. Victoria has been showing livestock for more than a decade, including lambs and market steers as a 4-H member. Although Victoria has aged out of the program, she continues to share her expertise as a 4-H leader.

The Northern Tier Championship show is open to all age groups and, at this event, the Youth Show Results and Open Show Results lists of first and second place winners were nearly identical, as the youths bested their adult counterparts. In addition to the aforementioned top winners, the Senior and Reserve Champion Five-Year-Old award on July 29 went to Emory and Gavin Bewley and Ella and Clair Hlavaty, co-owners of a cow named Bittersweet Bearcat. Emory Bewley’s Hefty Janet won the blue ribbon for the best Production Cow. Winners also received prize buckets containing animal health care items, grooming supplies and show-day essentials.

It was Nash’s first time judging at the Harford Fairgrounds and seeing the rolling Susquehanna County countryside. “I really enjoyed it and appreciated the way that the cattle were presented and the quality of the show,” he stated. “A lot of hard work went into it.” 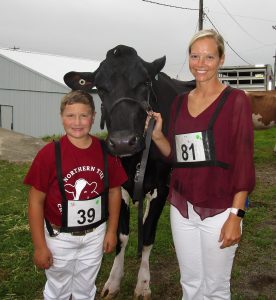 Heather Soden with son, Tyler, are ready to show Holly, who took first place in the Junior 3-Year-Old division.