In: Volunteerism
With: 0 Comments 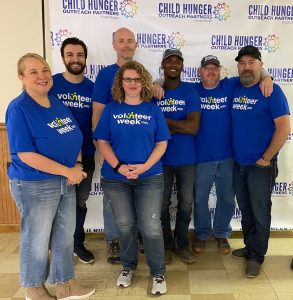 A team of Williams’ bridge builders at Patriots Cove in Noxen (top) and a food packing crew (above) at C.H.O.P. in Tunkhannock.

The employees of Williams Companies in northeast Pennsylvania recently embarked on a week of volunteerism that introduced them to a variety of non-profit organizations that depend on altruism to fulfill their respective missions. Their efforts were part of a larger, national campaign by Williams that involved 160 projects across 18 states.

“We started with a ‘Day of Caring,’” Williams community outreach coordinator Tammy Bonnice said of previous volunteer efforts. “But we expanded it to a week this year, and we plan to keep it going.” In some cases, an organization will reach out to Williams with a specific need, she noted, but beneficiaries of ‘Volunteer Week’ were mostly selected by the employees themselves.

Jack Walsh, VP and GM of Williams’ Susquehanna River Supply Hub, was part of a crew that packed bags of food at the Children Hunger Outreach Partners (CHOP) office in Towanda, while another team was in Tunkhannock.

Though their visit was planned, Tunkhannock CHOP program manager Lynne Hunting said that the scheduling was nothing short of “serendipitous.”

A few days prior, a freak spring snowstorm knocked out power for many in the county, necessitating the coordination of an emergency relief food pantry for CHOP clients. A large truck had arrived that morning from CEO/Weinberg loaded with fresh and pre-packaged foods.

“We needed hands, and their hands were here to help,” Hunting recalled, adding that it would have been impossible for she, fellow program manager Lindsay Howard, and their regular volunteers to do so much work in such a short amount of time. After packing boxes and bags for distribution, Hunting said that several of the Williams employees stayed on to help manage traffic and personally hand off food to more than 80 families that drove up to the facility. “It all came together the way it should have and it was marvelous. So many of those families were very grateful.”

Williams volunteers in Towanda packaged food that will be distributed to students through the agency’s Backpack, Summer Feeding and School Pantry programs. “I was amazed at how many different programs CHOP supported and unfortunately how many area children deal with food insecurity on a daily basis,” Walsh related. “I was equally impressed with the passion and dedication of the CHOP volunteers as they work to distribute thousands of meals per month inside of our community.”

Patriots Cove has been on Williams’ radar for a number of years now, favored by many employees for the dedication of its founders and staff to provide recreational opportunities for veterans and first responders living with PTSD and other service-related injuries. More than 40 employees were on site, clearing debris from winter storms, planting more than 100 flowers, and improving the habitat of Beaver Run, a waterway utilized for trout fishing.

Williams environmental specialist Chad Johnson was part of a team building a new bridge across the stream, allowing for greater handicap access and light work vehicles to reduce impacts on the waterway. Johnson is quite familiar with Patriots Cove, having volunteered there in various capacities over the years. Nonetheless, he stated, “It never ceases to amaze me the progress and the projects that are constantly ongoing at the Cove. The bridges, new buildings and housing, stream enhancement projects, and tree planting are all geared toward offering more services to those men and women who have served.” 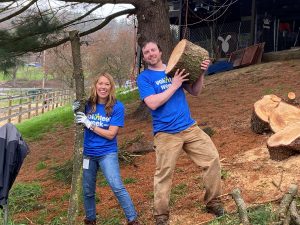 Melissa Iddings, an inventory coordinator for Williams, spent a day at the Blue Chip Farm Animal Refuge near Dallas, clearing a fallen tree behind the kennel, painting, and cleaning horse stalls. Iddings (above, left) said that she was impressed by the “love and dedication all the volunteers have for the animals they rescue.” Of Williams’ commitment to outreach and volunteering, she added, “It makes me feel good to help these organizations and help our community.”

Gary Hinerman, a field optimization supervisor, volunteered at Camp Freedom, an 1,800-acre retreat for veterans that offers hunting, fishing, hiking and counseling to a growing number of clients each year. Williams employees filled potholes along the entrance road, raked gravel that had been plowed into grass during the winter, and mulched around bird feeders. 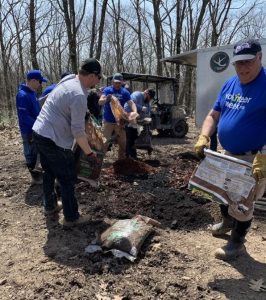 While he was there, Hinerman learned that Count’s Kustoms, the high-end Las Vegas vehicle restoration shop featured on television’s Counting Cars, routinely puts some of their works up for auction to support Camp Freedom. “It was impressive to see how much people really care and want to give back to support the organization,” said Hinerman, who noted that Volunteer Week provided a great opportunity to meet other like-minded people. “When Williams’ team steps up to serve the community, it is fulfilling and self-rewarding.”

Williams Susquehanna Supply Hub operations manager Eddie Hartman put in a full shift at True Friends Animal Welfare Center where, after meticulously cleaning several kennels, he walked about a dozen dogs on the trails behind the Montrose facility. “I could tell they truly enjoyed the time being outside and my personal attention being given to them,” Hartman said of the canines, adding that he then inquired about returning to walk dogs again in the future. “Williams employees are very fortunate to work for a company that allows them the opportunities to participate in events like this,” he remarked. Volunteering, he noted, is much more rewarding than a company simply giving financial support to an organization.

“It took a lot of work off an already burdened staff,” said True Friends kennel manager Lexi Thompson, who added that the Williams employees also cleaned the cat rooms, took trash out, and did a lot of laundry. “Most importantly, they enriched the lives of our homeless animals. We look forward to working with them again, and they are always welcome!”

“You can’t put a price on that kind of support. It’s invaluable,” Patriots Cove founder Jeff Swire stated. “Williams has always been a big supporter of Patriots Cove. But to have them come out and provide physical support in addition to their financial help is a testament to the quality of people that they are.” 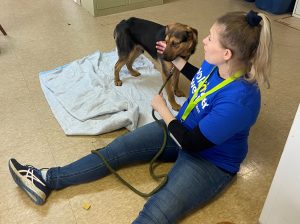 2022-05-22
Previous Post: Commissioners Coordinate Contribution to Hunters Sharing the Harvest
Next Post: Plenty to See and Do at NEPA Bluegrass Festival