In: Hunting
With: 0 Comments

Bradford County Commissioners (from left) Doug McLinko, Daryl Miller, and John Sullivan and Rep. Tina Pickett (second from right) were among those in attendance for the presentation of a check for $20,000 to Hunters Sharing the Harvest, represented by cofounder John Plowman (right), executive director Randy Ferguson and (not pictured) Roger Kingsley at the Towanda Gun Club on May 18.

Hunters Sharing the Harvest (HSH) celebrated a milestone last year when the organization marked its 30th anniversary. Working with local meat processors, food banks, sportsman’s clubs, and agencies like the Pennsylvania Game Commission (PGC), HSH’s band of volunteers helps to put donated venison into the freezers of people in need across the state.

Despite reporting a 30-year total of two million pounds of meat since since 1991 and coordinating the collection and distribution of 4,212 pounds from 103 deer in Bradford County alone last year, HSH is facing mounting obstacles. There are fewer hunters in Penn’s Woods and fewer meat processors, and the deer population in many parts of the state is outpacing available habitat.

“We are making an impact, but we need a lot of help,” said Randy Ferguson, who became the new HSH executive director in 2021 when co-founder John Plowman retired from the position. “So we are asking ourselves how we can affect a change and get ahead of these challenges.”

One solution is to encourage hunters who enjoy the sport but don’t want the meat to contact HSH in advance of deer season so that county coordinators can, in turn, arrange for processing. To assist with that objective, the Bradford County Commissioners donated $20,000 in ARP funds toward the cost of processing during a presentation on Wednesday morning at the Towanda Gun Club. According to Plowman, the Towanda and Monroeton gun clubs and the PGC also contribute financially to the processing fees, a cost that was initially split with the participating hunter.

Bradford County is fortunate in that it has a dedicated coordinator in Roger Kingsley and four certified processors, most of whom were in attendance. Deer hunting remains immensely popular in Bradford County due to its large whitetail population. That and the high visibility of HSH has helped Kingsley pair up donations, processors, and deliveries to food pantries across the county, including T.A.C.O., which is run by the First Presbyterian Church in Wysox Township and serves families in the Towanda, Northeast Bradford, and Wyalusing school districts.

“We have a hunting public that is starting to look at this as an opportunity,” said Ferguson.

The Game Commission, represented at the event by northeast regional director Daniel Figured and PGC officers Praveed Abraham and David Van Solkema, plays another role in the HSH program by getting deer to the processors that have been illegally taken by poachers or hunters not adhering to antler restrictions.

While HSH has become a well-oiled machine in Bradford County, organizers have serious concerns about the future of the program. “We are looking for new ways to expand the mission throughout the state,” Ferguson remarked. “We’ve got processors who are only hanging on because they cannot find someone to take over the business.”

HSH has met with the state Department of Education to encourage the establishment of meat processing as a skill trade and potential career for graduating high school students. Efforts are also underway to get more hunters out to enjoy the sport.

“Today’s hunters can harvest far more deer than they can utilize themselves,” Kingsley maintained, citing the availability of additional antlerless deer tags and deer management programs.

Ferguson suggested that most families only need one deer in their freezers per year. In a changing world with fluctuating food security, HSH representatives want to avoid any reduction in what has amounted to 10 million servings of ground venison to Pennsylvania residents over the past 30 years.

During the 2020-21 hunting season – at the height of the pandemic – more than 190,000 pounds of venison was secured, greatly surpassing HSH’s annual goal of 100,000 pounds. “We thought that was an anomaly,” said Ferguson.

When the deer harvest was reported to have dropped by about 13 percent this past year, organizers expected a similar decrease in donations but were pleasantly surprised to announce that 187,426 pounds had been donated, just shy of the previous season’s record. Ferguson hopes that the figures are representative of a renewed spirit of people helping each other.

For their part, the three commissioners took turns at the podium acknowledging the ongoing need for the program, the grassroots support base that HSH has established, and its ability to recruit and motivate volunteers. They agreed that using ARP (American Rescue Plan) pandemic recovery funds was a good fit for HSH and the county. 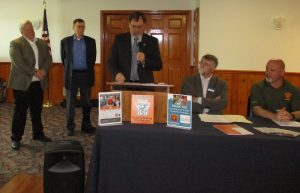