What We Know and May Never Know About Friedenshütten

In: Local History
With: 5 Comments 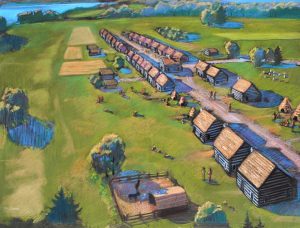 Moravian missionary David Zeisberger (top) preaching to the Indians at Friedenshütten. Artist Brian Keeler painted the above rendering of what Friedenshütten looked like based on maps and journals from the era.

There are many anomalies of American History obscured as dates on a timeline or interpretive panels along highways. They tend to defy logic because some stories just don’t seem to fit the conventional wisdom applied to a particular region or era. The Indian town of Friedenshütten in Bradford County certainly fits that mold, as the experimental village was short-lived and overshadowed by the better-known conquest of the region by American soldiers during the Sullivan Campaign to rout the area of “the Native Menace.”

When people think about politics as it shaped a developing nation whose forefathers were rapidly colonizing lands previously owned by indigenous people, disagreements between the Colonists, the British, and also the French are often the first to come to mind. But near present-day Wyalusing, a different kind of political landscape was unfolding a decade prior to the Revolutionary War.

M’chwihilusing and much of the territories flanking the Susquehanna River down through what is now Wyoming County was regarded by members of the Iroquois Nation (or Haudenosaunee) as their “southern door.” In that sense, the area was extremely sacred and guarded at a time when the Mohawk, Oneida, Onondaga, Seneca, Tuscarora and Cayuga peoples were preserving their newly-formed six-nation Confederacy.

It was their counsels who decided when and how displaced Indians from the east and south would be adopted into the lands they held with the blessing and protection of the French in upper New York. The Seneca and Cayuga tribes had already moved north, and M’chwihilusing became a sort of holding tank for refugees like the Susquehannocks and Delaware Indians (Leni Lenape).

When Moravian minister Christian Frederick Post preached to Indians there in 1761, he reported that they were moved by his sermons and sincerely touched by the Holy Spirit. Quaker minister John Woodman also preached in the area and found favor among the Indians. 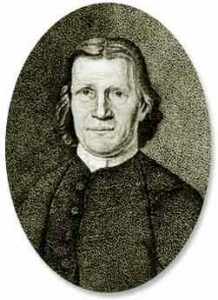 Two years later, Moravian missionary David Zeisberger (above), who was known to the Haudenosaunee from his visits to the Mohawk Nation near present-day Syracuse, NY, explored M’chwihilusing and deemed it suitable for a modern Christian Indian village, inviting displaced Munsee Indians (the Wolf Tribe of the Lenape) to live with him and members of other tribes that had been converted to Christianity.

The Haudenosaunee apparently didn’t initially see Friedenshütten (German for “Huts of Peace”) as a threat to their interests. For at least the first five years of its existence, the 200 or so mixed natives and Moravians lived in harmony. They learned each other’s customs and blended their religions to an extant that, Zeisberger suggested in his journals, God had permitted. Significant flooding in 1761 and 1768 resulted in the rebuilding of portions of the village on higher ground. Other missionaries came and went, but Zeisberger was largely regarded as the founder and leader of the village.

The Moravians considered themselves neutral to the American cause and were in fact unwavering in their belief that they had been sent to the American continent to share the Gospel with the Indians and protect them from Evil. The fact that the Moravians considered rum, which the English would use for trade and coercion of the natives, to be among those evils did not sit well with the Colonists, often pitting the Moravians in an uncomfortable position on both political landscapes.

With provocation from the French, who had settled much of Canada and were moving down into the Ohio Valley, the Iroquois began a series of raids on white settlements farther down the Susquehanna. The distrust among them of English-speaking traders and explorers grew. Despite the peaceful disposition of the villagers of Friedenshütten, the Haudenosaunee could not be sure exactly where their allegiance lay, especially as Quaker evangelists continued to frequent the area.

The Quakers were as much interested in protecting freed African American slaves as they were devoted to making friends with the Indians and trying to smooth over the ill feelings that were growing between them and encroaching white settlers. Among them was Quaker minister John Woolman (not to be confused with the aforementioned John Woodman), who made the arduous journey from Philadelphia to Wehaloosing in 1762.

In a highly detailed journal of his life, one chapter if Woolman’s diary is devoted solely to that trip, which was preceded by much consternation and prayer before he was convinced that God wanted him to go there. “Those Natives have, in some Places, for trifling Considerations, sold their Inheritance so favorably situated; and, in other Places, been driven back by superior Force,” Woolman wrote. His perception of Universal Righteousness suggested that the white man was to give “no just cause for Offence to the Gentiles who do not profess Christianity, whether the Blacks from Africa, or the native Inhabitants of this Continent.”

Before he had even made it to Fort Wioming, his party received word that forts in the area of Pittsburgh had been brutally attacked and that further attacks were being planned by the Iroquois from a village about 10 miles north of Wehaloosing, likely the Indian villages Queen Ester’s Town and Tioga at the confluence of the Susquehanna and Chemung rivers.

Woolman retreated to prayer again and came back to his party asserting that God was spurring him on and promised to protect him from the potential dangers that lie ahead. He gave the other men an opportunity to bow out of the journey, but they stayed with him. They reached Friedenshütten in mid June 1762. After meeting first with the Moravian leaders, Woolman was permitted into the village to speak and pray with the Indians, who received him graciously. He described the town as containing some 40 structures, “some about thirty feet long and eighteen wide; mostly of split plank, on which lay rafters, covered with bark.” Others were simpler Indian huts.

Though few of the villagers understood English, and Woolman at times felt “inferior among them,” he was assured through interpreters that they had felt his message, sensed his sincerity and, in fact, enjoyed hearing about Christianity from a different perspective. After about a week, he prepared for his journey back to Bethlehem, via Tankhanna and Wioming. He’d expected two Indians to be in their company, “But we found many of them were going to Bethlehem with Skins and Furs,” he wrote.

Tensions grew between the Haudenosaunee and the inhabitants of Friedenshütten. Fearing that the village would be caught in the crossfire between the Revolutionary Army and the French-led Indians, its leaders decided to abandon their settlement and move to Ohio, where they thought they would be safer. They were not. But that is another story.

According to Wyalusing Historical Society Museum curator Morgan Clinton, while Friedenshütten is but a blip on the radar of American history, “It is a really significant part of the Moravian history, and they still reference it. This was sort of the success story for their mission work. They modeled other villages off it.”

The diaries of David Zeisberger, explorer Johannes Ettwein, and John Woolman are important because they provide a more detailed look at what life was like for this group of Native Americans who weren’t on their native lands. “It’s kind of addressing a transitional period that doesn’t have a lot of other documentation,” Clinton related. “There’s a lot of different stories that tie into the same place.”

The story of Friedenshütten was well-known to some of the American soldiers who would camp along the banks of the Susquehanna River as they moved upstream from Wyoming to Chemung and beyond during Sullivan’s March in the summer of 1779. Arriving in Wyolusing on Aug. 5, Lt.-Col. Henry Dearborn started his journal entry with a history lesson, detailing with relative accuracy what he knew about Friedenshütten.

In just seven years, he noted, the remains of the settlement, which had been burned to the ground, were overgrown “with a large burthen of English Grass,” which stood in contrast to “Indian grass” mentioned in other diary entries.

“English grass is any grass suitable for haying and is probably so luxuriant because the area had been farmed only a few years prior,” Clinton suggested. 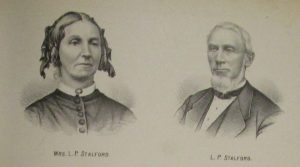 The land on which Friedenshütten stood was sold by the Moravians and Indians to L.P. Stalford and his wife (above), and their descendants held the tract in modern-day Browntown for centuries. It was purchased in recent years by New Fortress Energy, which began construction of a liquefied natural gas plant that stalled, in part, due to push back from conservationists in the region, in addition to permitting issues. 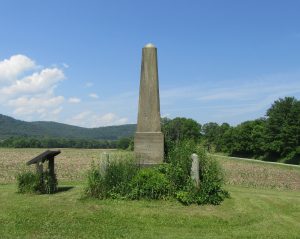 The Friedenshütten Monument erected in 1871 is a nationally recognized historic marker and still publicly accessible via Moravian Road off U.S. Route 6 next to the Wyalusing Valley Personal Care Home. It was placed by the Moravian Historical Society where they believed the center of the village and a large chapel to have been located. 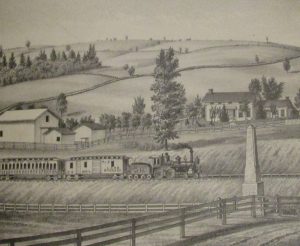 Unfortunately, the precise footprint of Friedenshütten has not been confirmed. An excavation of the site, known by many as the Kings College Dig of 1972, found many artifacts that would have predated the village. Only when the archaeologists were running out of time and funding did they feel that they had caught the edge of the village. It was decided that Friedenshütten had more likely been located farther to the west. 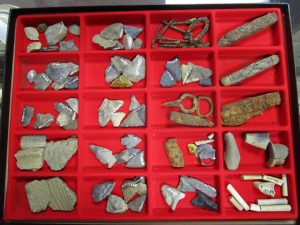 Artifacts discovered in the area of Friedenshütten during the 1972 Kings College Dig both predated the village and represented the activities of later settlers. They are on display at the Wyalusing Valley Museum. 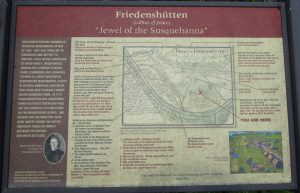 An interpretive panel describes in German and English the details of a 1768 map of the village. 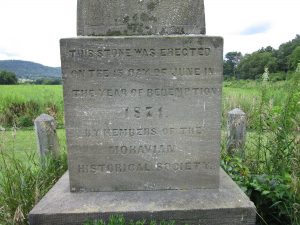 The south side of the monument bears a description from the Moravian Historical Society. 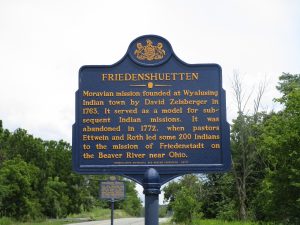 Historical markers along Route 6 near the entrance to Moravian Road ironically depict the story of Friedenshütten and Sullivan’s March, which happened eight years after the village was abandoned.