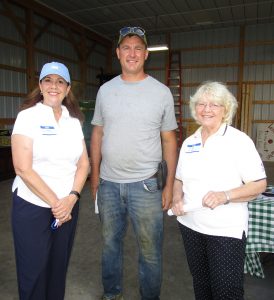 Farm Bureau administrators, ag producers, and elected officials (top) listen to a presentation about beef production at Shamrock Farms north of Lawton on Aug. 24. Above, Sen. Lisa Baker (left) and Rep. Tina Pickett (right) talked with ag producer Ben LaRue about ways to slow traffic down on Route 706, which runs between his fields and produce stand.

(originally published in The Farmers Friend)

Produce, feed and silage, dairy, meat products, and orchards. Each type of Pennsylvania farming operation brings with it unique challenges. But all ag producers have something in common. They have to rely on their elected officials to understand their needs and leverage and convey their concerns to policy makers in Harrisburg and Washington, DC. On Aug. 12, the Susquehanna County Farm Bureau (SCFB) conducted a Legislative Farm Tour to help bridge that gap.

SCFB president David DeLeon credits SCFB environmental coordinator John Benscoter for coordinating the event which highlighted best conservation practices. “This then ties itself to showing our legislators the immediate need for funding to continue these critical practices,” DeLeon stated.

In addition to Susquehanna County commissioners Betsy Arnold and Judy Hershel, attendees included Sen Lisa Baker, Rep. Tina Pickett and Liz Vollman from Sen. Gene Yaw’s office. Members of the Susquehanna County Conservation Board also participated. They joined about 30 local farmers on a driving tour of three distinct operations, including LaRue’s Produce, Shamrock Farms, and Russell Farms. Owners of each shared details of their operations and fielded questions from the elected officials about the challenges they face.

“I always look forward to hearing how our farmer’s operations are going and to learning the legislative priorities of the farmers so I can be supportive,” said Sen. Baker, who appreciated the diversity of the tour.

The LaRue’s grow vegetables and fruits for a roadside stand, as well as beef cattle for retail outlets. Ed Kelley’s Shamrock Farms is solely a beef operation geared to restaurants. Russell Farms grows an extensive amount of produce while constantly enhancing their orchards with new technologies.

“These tours are invaluable,” Rep. Pickett remarked. “You get to hear from the people who are actually involved in farming. We all love pulling up to that local market and getting locally grown food.”

The Russells and the LaRues agreed that the retail business has been brisk in the face of the COVID pandemic. Half of the meat that Dennis LaRue and his wife, Victoria, raise is sold at the stand that daughter-in-law Renee and her children run on Route 706 between Lawton and Montrose. Mike Russell echoed Renee’s sentiments that people have a renewed interest in where their food is coming from and supporting local growers.

“Farming is still the backbone of our county. We have plenty of land and plenty of farmers,” commissioner Arnold remarked. “It’s important that our legislators know how important farming is to us.”

“It’s important for us, as area legislators, to hear directly from our agricultural community,” Sen. Yaw offered. “Many good legislative changes have been the result of these farm tours conducted by the Pennsylvania Farm Bureau.” Yaw cited broadband accessibility, renewable energy projects, land use, and storm water runoff as additional topics on the minds of local farmers.

Runoff as it relates to the health of watersheds and ultimately the Chesapeake Bay has been addressed by Susquehanna County farmers through numerous conservation efforts like the construction of concrete pads for both barn yards, equipment lay-down yards, and manure tanks.

“We’re not playing in the mud anymore,” said Benscoter. “And they don’t want the cows walking around a lot,” he said of wholesale buyers. Benscoter is an aggressive proponent of the installation of heavy use area protection (HUAP) He has helped many local farmers with the design and construction of pads, as well the paint-tray manure holding facility that was featured at Shamrock Farms.

The efforts are ongoing, said DeLeon, and the SCFB wants to be at the forefront of innovation and compliance. “Many farms in the county have done a great job in their practices and need to show off what they’ve been able to do,” he related. “Others need to accept the changes that need to be made and be educated as to what needs to be done to meet those goals.”

Bill Burke operates Burkes Farm in Auburn Center, Susquehanna County, and is also the current president of the Wyoming County Farm Bureau. He is proud that environmental responsibility and employing best practices are hallmarks of the agency. In the late 1990s, Burke received assistance from Benscoter through the Farm Bureau to construct a concrete barnyard to help protect the Chesapeake Bay.

Ed Kelley cites guidance from the SCFB and the state’s Resource Enhancement and Protection program (REAP), which provides tax credits to farmers for environmentally sound repairs and enhancements. “I couldn’t do it all without help from the government to build the barns,” he told tourgoers. Kelley successfully used REAP credits to offset up to 50 percent of the cost for construction of a $250,000 barn.

Despite best practices, Mother Nature can and does often play tricks on ag producers. Ben LaRue was one of several growers to talk about the importance of a good nutrient management program. He applies natural fertilizers weekly or as needed. The clear, rock-bottom stream that supplies fresh water for his drip irrigation system can also become a raging brown torrent in a matter of hours and wash all his nutrient-rich top soil away.

“Flooding also brings new diseases,” Ben related. He suggested that smaller streams do a lot more gouging of farmland than do rivers and asked generally of the legislators what creek remediation programs are offered by the state.

Burke took the opportunity to speak directly with Rep. Pickett and get her feelings on where the ag industry is going. “It costs so much to farm anymore,” he told her. “Is more marketing needed? Is there more education that needs to be done?”

Participants and organizers were satisfied with the way the tour was conducted, the new techniques that were demonstrated, and the willingness of the elected officials to hear their concerns.

“I was impressed with everybody that was involved with it,” Burke remarked. He was fascinated by the sprinkler system that had been installed at Russell Farms to save fruit trees during a hard freeze by coating them with ice.

“I believe it went exceptionally well,” said DeLeon. “The feedback that I received was very positive from both the legislators and fellow farmers. Both groups could see how farming is changing in the county for those of us who are not only protecting the land and water resources but also have seen success in their agricultural ventures.”

“Farm owners are very knowledgeable yet consistently seeking new ways to use their land more productively and in environmentally-friendly ways,” Rep. Pickett stated afterward. “I found this to especially be so as it was emphasized on this tour.” She also fielded concerns about excessive crop damage by deer, internet inaccessibility, and deteriorating roads and bridges. 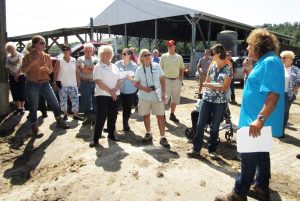 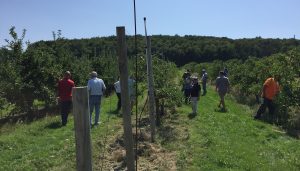 2021-09-04
Previous Post: Tuning in to Ham Radio Operators in Bradford County
Next Post: What We Know and May Never Know About Friedenshütten