Tuning in to Ham Radio Operators in Bradford County

Our investigation into amateur radio operators in Bradford County and how they relate to official county safety strategies helped us understand the need for a new generation of operators and an appreciation for the 60- to 80-year-old “hams” who are keeping one of the oldest and most basic forms of telecommunication alive. We caught up first with the Northern Tier Radio Repeaters (NTRR), one of the most prolific clubs in the region, at a weekly breakfast meeting at Nana’s in Wysox.

Amateur radio operators, or “hams” as they are better known and prefer to call themselves, have been around since about 1900, following the successful adaptation of radio waves discovered by German physicist Heinrich Hertz into a communication system invented by Guglielmo Marconi, an Italian electrical engineer. Indeed, within a few years of instructions appearing in hobby magazines for building crude transmitters and receivers, students and adults rushed to embrace the hobby.

Wireless transmission was largely unregulated, and the ability to interfere with commercial and military radio signal transmission was causing problems well before the sinking of the RMS Titanic. The U.S. Congress passed the first Radio Act in 1912, followed by the international community the following year, severely restricting private operators to shorter wavelengths – hence the beginning of short wave radio. Ham radio enthusiasts were ordered by the U.S. government to shut down during both World Wars.

In the 1950s, technical advancements helped amateur radio operators move beyond Morse code transmission to HF voice communication. That’s when a number of young men and boys from Bradford County took to building their own radios and getting in on the game, which was by then licensed and moderated by the Federal Communications Commission (FCC). Many of them, including Dave LaBarre of Windham Township, credit Monroeton television shop owner Fred Cowan for getting them started.

LaBarre recalls visiting Cowan with his father, Frank, at Cowan’s home where the “dot-dot-dit-dit” of Morse code was coming through his receiver. The conversation between Frank and Fred was barely interrupted as Cowan simultaneously translated the radio conversation. “He could tell me what the guys were saying while he was talking to my dad,” LaBarre remembers.

“He was the one who taught us about antennas and stuff,” Albany Township ham buff Duane Robinson said of Cowan. “He was a guy who had patience. Some guys seemed annoyed when we tried to talk to them.”

LaBarre and several of his friends had constructed their own radios and were licensed transmitters by 1959. “It was just magic then. There were no cellphones or CB’s,” he remarked. “Someone going for their test used to be a big deal. We’d all meet and have breakfast or lunch and celebrate or console them, depending on the outcome.”

Robinson and LaBarre are longtime members of the Northern Tier Radio Repeaters (NTRR) and among up to 10 seasoned hams who meet for breakfast every Thursday morning at Nana’s Country Kitchen in the Bradford Town Center in Wysox Township. While the men know each other very well from years of sharing their hobby, they are quick to introduce themselves to anyone new by their call signs. LaBarre for example is K3HSK, and Robinson is W3KXR.

“That’s a very important part of who you are as a person and an operator,” said Meade Murtland, head of Bradford County’s Amateur Radio Emergency Services (ARES), which is part of the Amateur Radio Relay League, a national organization. “Every one of those guys has more knowledge than I could ever hope to assemble.” 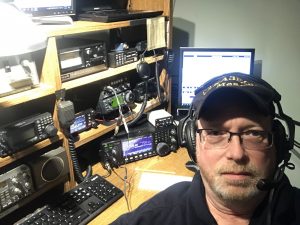 Their gatherings are an anomaly though, Murtland (above) said of the veteran hams. “A lot of people are committed, but they don’t want to be part of clubs anymore and have to meet on the same night of the month,” he said in reference to the operators countywide.

Nonetheless, Murtland would like very much to grow the program. “We are losing members by attrition,” he stated. “People have moved, passed away or lost interest.” Even members of the loosely-knit local organizations are just as likely to communicate via email or skype these days.

“Before the internet, in the 1970s and ’80s, we ran phone patches for the military, like hooking sailors up with the folks back home, and missionaries in Africa,” Robinson recalled. “Back in those days, it was a great thrill to hear a kid on a ship. I used it to justify my equipment.”

Even though the heydays of amateur radio may have past, hams are still highly regarded by public safety officials. “Currently, the ham radio operators in the county serve as a component of our Emergency Operations Center when needed to perform a variety of tasks as empowered by the FCC, FEMA (RACES Protocol) and National Incident Management System (NIMS),” Bradford County public safety director Matt Williams explained, “which allows them to support emergency communications for any public service agency during times of disaster.”

The local ARES is tasked with supplying communication if the 911 center is incapacitated or overwhelmed, Murtland related. “You might look at their new center and say, ‘That will never happen,’ but it does,” he said. “If the volume is more than they can handle, they might call us. We do not self-deploy.”

“Typically, as an emergency incident scales up beyond a localized event, communications systems may not be capable of normal capacity in the affected areas either due to damaged infrastructure or overloaded communication systems,” Williams concurred. “Ham radio operators will supplement communication gaps among jurisdictional agencies until which time full service can be restored.”

“We are one of the largest counties in the state, and communications can be stretched thin,” Murtland remarked. “The amateur radio operators do work a lot with the National Weather Service out of Binghamton, supplying them with storm reports. Technology is great but not always as accurate as somebody experiencing it – like the difference between pea-size and quarter-size hail from one community to another.”

And the NTRR members are still having fun. A few years ago, they found that they could talk to astronauts on the International Space Station, including Col. Douglas Wheelock, who they learned is from lower New York state. “Everybody on the space station has a ham ticket,” said Robinson. “He was a real ham and liked to talk to people as he went over them.” One of most exhilarating aspects of short wave transmission, they agree, is being able to talk with operators in other countries and continents.

“If it’s a rare country, you say ‘hello’ and ‘goodbye’ and make sure they have your call letters,” LaBarre related. “Most of them, including Russians, can speak some English, even if it’s broken.” Group members insist that LaBarre is still the most prolific hammer of the group, firing up his system every day.

“When you pick up that microphone, you never know who is going to be on the other side,” Murtland said of this time-honored form of foreign correspondence. “Some of them become lifetime friends.”

“You meet a whole lot of nice people.” LaBarre agreed. “The coolest thing besides the space station was talking with someone in Antarctica.”

According to Murtland, there are two kinds of amateur radio operators – those who intrinsically understand the technology and can build their own radios and – at the newer end of the spectrum – first responders. “Communication to them is a tool,” Murtland stated. “They don’t care what makes the radio work. There’s a volume control, and there’s a key that you press to talk.”

Murtland would like to bring both groups together to share their experiences and learn from each other, thus boosting the ARES to the level that the national Amateur Radio Relay League would like them to be. “The world of communication is extremely complicated. You do need training. You do need to do exercises and practice that frequently,” he related. “I really would love to have more volunteers to build up the program in Bradford County. I can even help them get their license. It’s easier than ever before. You can start studying online, and I can put you in touch with a class.”

Interested readers can learn more about the hobby through the National Association for Amateur Radio by logging on to www.arrl.com or reaching out to Murtland via email at mtm555@yahoo.com. 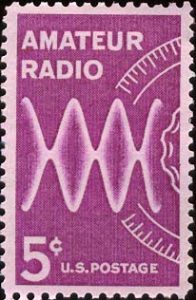 During the heydays of ham radio, the U.S. Postal Service celebrated the value of amateur radio operators with a postage stamp.