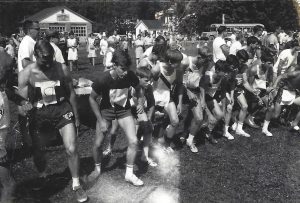 The Camptown Races will return this year to the namesake village, whose citizens have revived them many times over the decades.

The Camptown Civic Club has coordinated the event since the Camptown Men’s Club disbanded in 2008. Regardless of what organization has been officially at the helm, many of the same people have been involved with the Camptown Races for several decades or longer. They started out as children and teens helping to set up the event and assist with maintaining the rustic 6.2-mile course when their parents and other older family members were in charge.

In what was apparently a one-shot attempt at revival, the Camptown Races was a Grand prix-style bike race when conducted in 1962. An Aug. 9 newspaper clipping from that year refers to the horses of lore a la Stephen Foster’s folk song “Camptown Races” being replaced by “Boys on Bicycles.” There were numerous heats well into the evening providing thrills and spills for an excited audience. The big winner appears to have been Jim Carey, with Bob Warburton, Larry Otis, and Donald Detrick also cited in the article as heat winners.

The foot races have been run pretty regularly since the Men’s Club brought them back in June of 1965. Current Civic Club members give most of the credit to Jim Chadwick and Loring Skillings for resurrecting the races and establishing a formula and protocol that has endured. The original course followed Wyalusing Creek in one direction to Merryall before turning into the woods along old logging trails for the return to town.

Cross country running was still in its infancy as a rural American scholastic sport at that time, according to long-time news reporter and writer Wes Skillings, son of Loring. He lived in Camptown at that time and recalls that no schools in Bradford County had a cross country team yet. Running shoes geared to the rugged terrain were also pretty much non-existent, and the local boys who participated the first year were mostly wearing high-top sneakers or old work shoes.

Just across the border in New York state, schools in Binghamton, Elmira and Corning did have cross country teams, and their runners dominated the roster in those early years. Collegiate runners also came from Mansfield and Lock Haven. Another newspaper clipping from the 1960s, mocking the entry of the first two girls in the race, reads “What Would Stephen Foster Have Thought?” A 1971 account of the event in the New York Times was titled “Stephen Foster, You’d Never Recognize ‘De Camptown Races.’”

Locals are way over claims by people living in Camptowns in other states that the village in Wyalusing Township may not be the true Camptown of Stephen Foster’s song. What is known is that Foster lived in Towanda while his brother served as the chief engineer for the Erie Canal project. He attended the Susquehanna Collegiate Institute there and likely went with his brother to the watch the original Camptown Races, which were timed horse and buggy runs between Wyalusing and Camptown.

Despite being billed as a “five-mile race track” per the song, the foot race course was found to be closer to seven miles and needed to be scaled back a bit for the P.I.A.A. to sanction it for high school teams to be able to include it on their schedules. Early participant Tom Carter, a runner from Binghamton High School and later the University of Tennessee, was awarded a plaque in 1987 for being the all-time record holder on the original track at just over 32 minutes.

Additional activities on Camptown Races Day have varied greatly. In 1965, they included a Little League baseball game between Camptown and Wyalusing, a hootenanny, pony rides, greased pig contest, an arts show, and a block party that started at 9 pm.

The Camptown Civic Club celebrated the 50th anniversary of the modern races in 2015. It has been canceled only four times – in 1972 and ’73 due to flood damage of the course by Hurricane Agnes, in 2011 due to flooding by Tropical Storm Lee, and in 2020 due to the pandemic. Needless to say, race organizers are hoping for a big comeback for the event next week while being cautiously optimistic. “If we get 100 to 150 runners, we’ll be happy,” said Jim Schools, who is heading up the event committee.

The biggest challenge this year, according to Jim’s wife, Lorrie, was getting the trail back in shape for the race. Between not being used last year and an abundance of trees felled by storms and disease, the track was in rough shape. Local residents Glenn Bell, Jimmy Chadwick, Brennan Coates, and Dan Howard cut up more than 50 trees, and Boy Scouts under the direction of Rich Neiley and Irene Melly did weedwhacking and branch cutting with help from Savannah Schools.

Volunteers were looking to do a final cleanup of the trail over Labor Day weekend. In the meantime, the committee brought in an expert – John Johnson, who has won the race a historic seven times – to run the course and advise them on what areas needed some extra attention.

“This historic and rather difficult foot race is a massive part of our culture here in the Endless Mountains region,” said Cain Chamberlin, executive director of the Endless Mountains Heritage Region, which worked with the Civic Club this past year to secure its 501c3 non-profit status. The designation will put the Civic Club in a better position to apply for grants to ensure the continuation of the event for generations to come. “We look forward to seeing another great race in Camptown and are thrilled to see so many community members coming together to make it possible,” Chamberlin added.

“It’s exciting to see the historic Camptown Races return after having to cancel last year,” Robyn Cummings, executive director of the Bradford County Tourism Promotion Agency, concurred. “I think that runners find the challenging course athletically appealing but are also deeply proud to be part of the nostalgia of the song. September 11th will be a busy day in Camptown, and we hope runners and spectators alike turn out to support the event.”

Festivities in Camptown will run from 9 am to 2 pm on Saturday. Sept. 11. In addition to the 10K foot race that starts at 10 am, a Fun Run/Walk walk will take place at 10:05 or as soon as the serious runners are on their way down the course.

Other highlights will include free kids games and face painting, a hay ride at 1 pm, and live music by Matt Roehrig (10-11 am and 12:30-1:30 pm) and the Wyalusing Swing Choir (11 am-noon). An ice cream vendor will also sell Italian ice, while a dozen other vendors will offer antiques, jewelry, lamps, home décor, wooden toys, folk art, and other crafts. Camptown Boy Scout Troop #4 will sell popcorn and meat sticks.

Chicken dinners will be available for purchase as will chicken by the half. Additional food, as well as pies and other baked goods donated by members of the Camptown Civic Club and other community members, will be sold. The Civic Club will also host a booth at which T-shirts, Camptown history books, and other memorabilia, including relics from previous races, will be available for purchase. There will be a raffle for a cornhole set made by Adam Gochnauer.

Bradford County Dairy Princess Charity Wampole (below) will host a dairy promotion display table and will be at the finish line to give chocolate milk to runners as they complete the course. Awards will be announced and prizes distributed to the runners at noon. 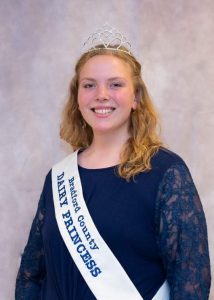 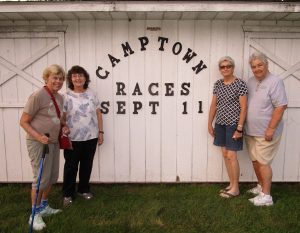 Camptown Civic Club members including (from left) Joan Abrey, Lorrie Schools, Irene Melly, and Rita Carey invite runners, spectators and anyone else who enjoys small town community events to join them on Saturday, Sept. 11 for the annual Camptown Races.

The hand-drawn cover from the first modern Camptown Races in 1965 paid homage to the horse and buggy races held a century earlier. 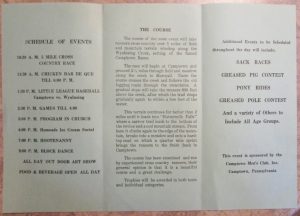 The interior of the 1965 program details the first running course, as well as accompanying activities for the day. 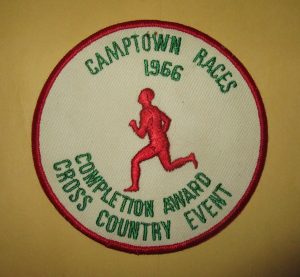 A patch provided to all participants of the 1966 Camptown Races who completed the course.

Runners in 1981 must have looked pretty rad wearing these stylish headbands. 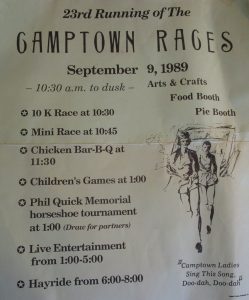 2021-09-04
Previous Post: Master Gardner to Speak on Jumping Earthworms
Next Post: Tuning in to Ham Radio Operators in Bradford County