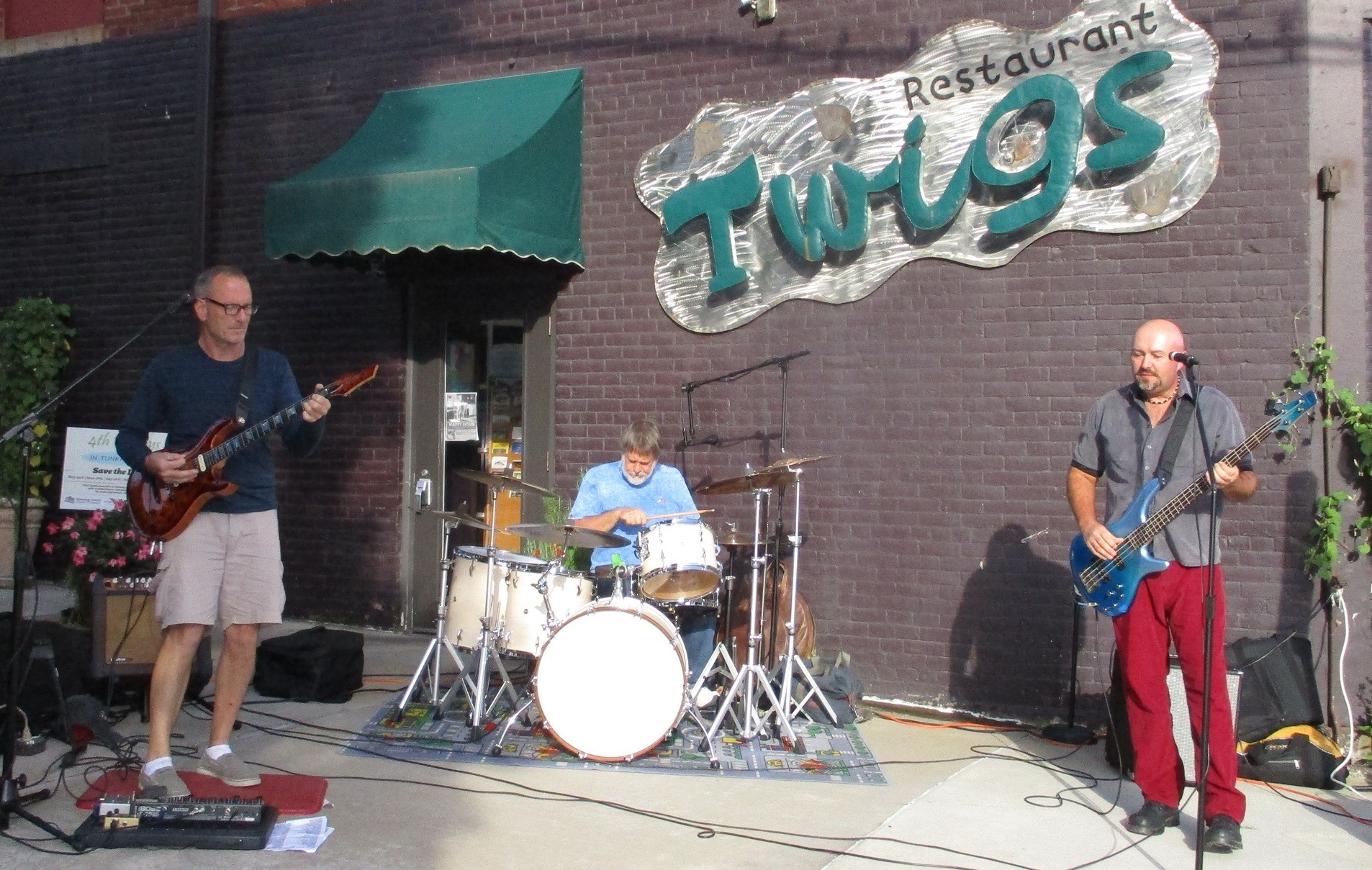 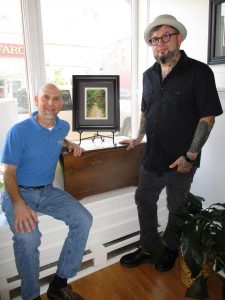 Street-side diners at Twigs Cafe got an unexpected treat on Friday when the band QBALL (top) set up to entertain them and others coming to downtown Tunkhannock for Forth Friday. Just down Tioga Street, Eric Brocious (above, right) was making fans of his watercolor paintings, which are on display at the Farmers Insurance office under the watchful eye of Will Burnell (left).

Tunkhannock’s Fourth Friday on Aug. 23 featured watercolor renderings by local tattoo artist Eric Brocious and an eclectic mix of music by the band Qball, who played al fresco on Warren Street. The works by Brocious were displayed at the Farmers Insurance office at 13 E. Tioga Street.

Brocious has only been working seriously with watercolors for the past two months, but he has been pursuing the arts since he was “old enough to hold a Crayola.” Prior to watercolors, Eric’s forte has been flash art, a genre of industrial design that is employed by tattoo artists. His shop, Tunkhannock Tattoo, at 101 Warren Street has been open for more than four years now.

A 1991 graduate of Tunkhannock Area High School, Eric credits art teacher Barb Sick for recognizing his talents and encouraging him to follow his intuition. “It’s the only class that I was good at,” Brocious recalls with a laugh.

Brocious has dabbled in oils and acrylics, pen and ink, sculpture, poetry and music, the latter of which he pursues as a member of a hobby band. His tastes on canvas evolved from cubist, Picasso-esque works to landscapes, impressionism and realism.

When asked how he decides which one of his artistic hats to don each day, Eric replied, “It’s more like what I feel like doing at the moment.”

A collection of his works will be on display at the Farmers Insurance office through mid-September. On Friday, dozens of Wyoming County Chamber of Commerce members stopped in to meet Eric, enjoy a snack and beverage, and get a close-up look at his works.

Office administrator William Burnell is happy to have Brocious’s works brighten up his work space and was especially smitten by two pieces displayed on easels in the front windows, one of which is a farm scene and the other a wooded pathway. “I love the round bails because of the perspective,” Burnell said of the first piece. Of the second, Burnell related that looking off into the distance through the tunnel of trees reminded him of a Robert Frost poem.

Just up the street and around the bend, three members of the band QBALL were treating outdoor diners of Twigs Cafe and other passersby to a repertoire of classic rock that was sponsored by Mercantile 22, a shop featuring antiques and uniques at 22 E. Tioga Street.

Fourth Friday is coordinated by the Wyoming County Chamber of Commerce.