Volunteers Credited as the Backbone of the Blueberry Festival 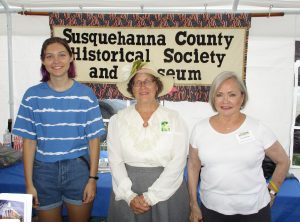 Thousands of used books were sold to patrons of the Blueberry Festival at Montrose on Aug. 5 and 6. Volunteers (above, from left) Grace Jurchak, Lori Richter Webster, and Carol Karutz were selling books and other items pertaining to history at the Susquehanna County Historical Society booth.

Excessive heat and humidity could not keep fans away from the Blueberry Festival in Montrose this past Friday and Saturday. It was the first time since 2019 that the event was held in its entirety, and patrons were obviously eager to get back to normal. The entire town was abuzz and parking spaces and lots were full, with many vehicles sporting out- of-state license plates.

“It’s really almost a reunion event. People come from all over,” said Bonnie Yuscavage, a research assistant at the Susquehanna County Historical Society (SCHS). “It’s a very family-oriented festival – not just moms and dads and their kids but extended families. They come back year after year.”

The event is a time-honored tradition of the Susquehanna County Historical Society and Free Library Association, stemming from the days when the organization shared the building at 18 Monument Street. Good fate allowed for the construction of a new, larger library on High School Road in Bridgewater Township, and the SCHS was able to expand into the entire downtown Montrose building. Both continue to benefit from festival proceeds.

The Blueberry Festival requires an enormous amount of planning and manpower, most of that from volunteers. While hundreds of them could be seen staffing various boots during the event, their assistance begins months in advance and takes on various forms.

“This event wouldn’t exist without volunteers. People volunteer time, money and love,” said Steve Spero, vice president of the SCL board of trustees. “Every booth has groups of volunteers. Some are organized groups like the New Milford Area Rotary Club, or it can just be fans of the library making an effort to make this a success.”

Jean Pierce and Ron Vermette, both of Montrose were handling the cash drawer at the entrance to two book sale tents simultaneously. Together they have more than 35 years of experience helping at the Blueberry Festival. 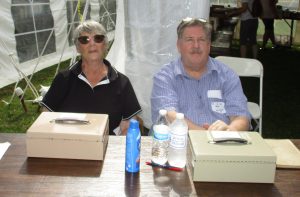 “I have lots of books myself,” Vermette (above, right) related. “And I was very involved with the board for a long time.”

“I love the library. I love books, and I love the people I work with,” Pierce (above, left) stated. “It’s a great community project.”

Luanne Snover and Bev Hagstrom, working as checkout clerks at another one of many used book tents set up in and around Monument Square, have both been helping for more than 20 years. 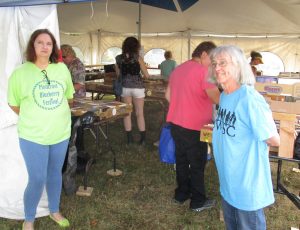 “I’ve worked all of the booths here at one time or another,” Snover (above, left) offered.

“I started at the hamburger stand, working the grill,” said Hagstrom (above, right). She likes helping the library and meeting new people. “It’s nice to see people who are interested in reading.”

“They ARE the event,” Ann Vitale said of the volunteers. “It’s networking. You just have to ask. ‘Yeah, I can carry that.’ ‘Yeah, I can pick that up.’” A book club friend of Vitale’s baked 1,500 blueberry muffins for the event. “They are so happy to have the full event back.”

A combination of employees and volunteers were staffing the very popular Commemorative Booth in front of the SCHS museum. Items for purchase included Festival clothing, coffee mugs, and more.

Karen Radwanski of Hop Bottom was helping Sue Stephens of Montrose find gift items for her children and grandchildren who are currently living in New Zealand. “They grew up here, so I want to get them something from here,” she said of Jacob and Brandie Stephens and their children, Sophia and Josephine. 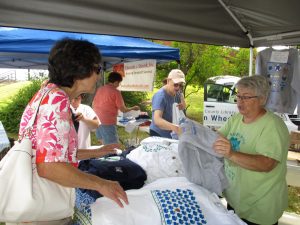 Radwanski (above, right) explained that she and her sisters and have volunteered for many years. “We just like to do things for local organizations,” she stated.

“I love local history, and this Historical Society covers all of Susquehanna County,” said Lori Richter Webster, who has volunteered off and on through the years and is dedicating more time to the SCHS since she retired.

Right next to the Commemorative Booth was Christine Clayton, executive director of Commonwealth Charitable Management. For the Blueberry Festival, she was representing the Susan Olzewski Stone Honorary Endowment Matching Campaign, which is designed to provide perpetual assistance for the Library and Historical Society. 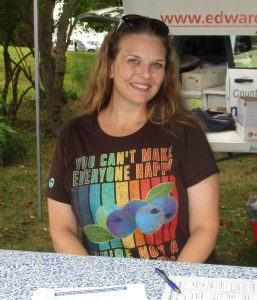 In a tight-knit community like Montrose, people knowing people is a huge benefit for community fundraisers. Spero credited members of Bridgewater Church, who have staffed a food booth for many years, and Pump N Pantry employee and booth manager Tina Aston as examples. When event organizers were having trouble with a freezer, Aston was able to arrange for cold storage in the nearby store. “This place is so connected,” Spero remarked, “and they all work together.” 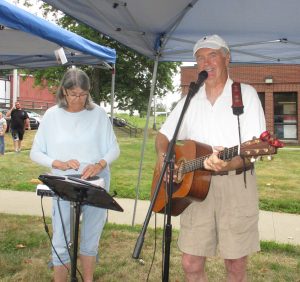 Kelly and Susan Pratt delivered a popular set of classic country and folk rock songs in the mid-morning heat. 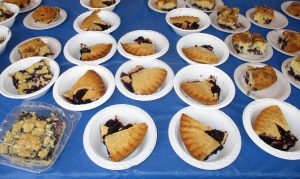 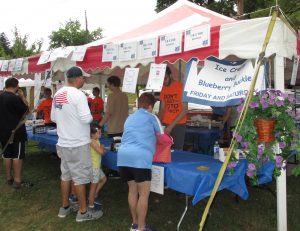 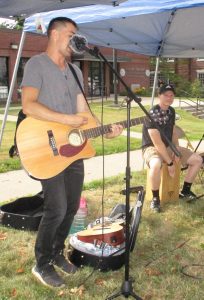 Ben Ely of Bridgewater Church, accompanied by Brendan Sweeney, provided a set of alternative pop music for both days of the festival. 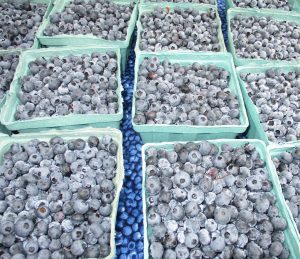 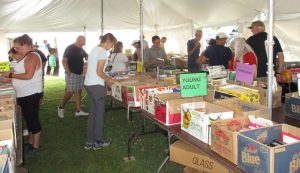 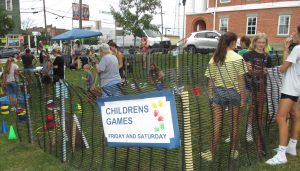 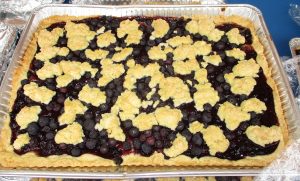 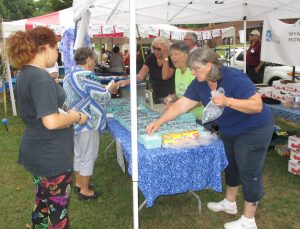 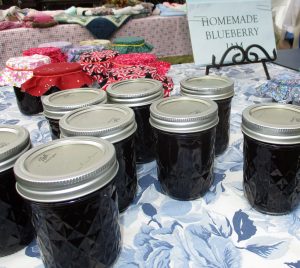 Susquehanna County Historical Society and Free Library Association board president Jeff Burkett, volunteer Ann Vitale, board member Ann Reed, and board VP Steve Spero are just a small sampling of the dedicated staff and volunteers to coordinate this year’s Blueberry Festival at Montrose.