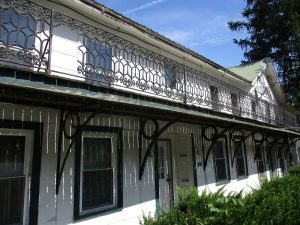 The Dana House, an historic stagecoach stop and inn (top) on Church Road in Eatonville, will be meticulously dismantled in the coming months. Some architectural elements, like the wrought iron corbels, porch railings (above), and the mounting block bearing the Dana name (below), will be set aside to become a new sign marking the building’s existence. 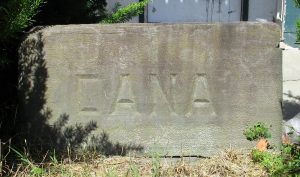 The news that the first installment from a class action opioid settlement upon which the county has been waiting for nearly five years should be in the bank by the end of August was perhaps the best news that the Wyoming County Commissioners had to share with those in attendance at their regular public meeting of Aug. 16. But many agenda items coincidentally focused on two ongoing projects in Eaton Township.

“It’s very exciting. We will be able to do a lot with this,” commissioner Tom Henry said of the $1-million dollars the county is expected to receive in two installments. “There were people who said that we would never get it, but we did.”

The commissioners unanimously approved the establishment of a new bank account for the opioid settlement funds as required under the settlement. Commissioner Rick Wilbur noted that the funds are to be spent over the course of 18 years.

The final PEMA buyout of flood prone properties started more than a decade ago will come to fruition when engineers begin to dismantle the old stagecoach stop long known as the Dana House. Meetings about the project have been held in recent months between PEMA officials, EMS director Ralph Schwartz, and the Wyoming County Historical Society.

“There are a lot of pieces, so we just want to be sure that everybody is on the same page,” Wilbur stated.

“We’ve never done a historical demolition, so we want to do it right,” Henry concurred.

The building has in recent years been home to a number of residents as an apartment house. It was condemned after the 2011 floods. Its front is situated closely to Church Road in Eatonville, and the rear of the building hangs precariously over Bowmans Creek, so its deconstruction must be executed with extreme precision.

Five bids have been opened for the work, but the commissioners are waiting on LaBella Associates to review the offers to ensure that all requirements are met. The two lowest bids are currently about $67,000 and $72,000, and the highest bid is $175,000. 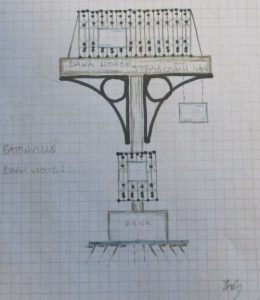 To many, the building is iconic of a bygone era when Church Road was the main road through Eaton Township. At the request of the Historical Society, pieces of its unique architecture will be preserved to create a sign (artist’s rendering above) that will be erected in its place, similar to the entrance sign of the pedestrian bridge over Bowmans Creek that sits adjacent to it that was constructed from parts of the iron bridge that preceded it.

Meanwhile, about a mile upstream at Seneca Trail Park, those associated with that project are pleased with the way things are going and report that a growing number of people are visiting the public greenspace and treating it with more respect since it was reopened last year.

The county is solely responsible for the park again, and volunteers have been dedicated to keeping it cleaned up from persistent summer storms. The amount of trash being left behind has decreased, and people are cleaning up after their dogs. 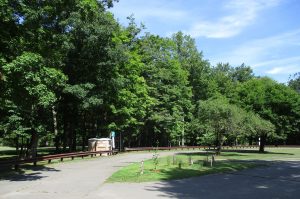 The commissioners have received correspondence from DCNR that they would be interesting in funding further improvements at the park through grants. Wilbur admitted that they currently have no idea how much funding might be available, but he’d like to see it used for the creation of trails, handicap accessibility, and perhaps the installation of grills, playground equipment and a pavilion.

The commissioners voted to not grant an easement requested by the PA Fish & Boat Commission that would have given the state agency significant control over access to Bowman’s Creek at Seneca Trail Park. “There were a lot of stipulations that concerned us,” Wilbur related. “We will allow them to keep it open, but they cannot have control over it.”

Lastly, the commissioners tabled a motion to establish a park board for Wyoming County-owned parks. Initially, they had considered forming such a board with existing members of the Seneca Trail Park Association that has done the majority of the work up to this point, but solicitor Paul Litwin III suggested that the new board have a broader base to be able to effectively deal with any future park projects that the county might take on. 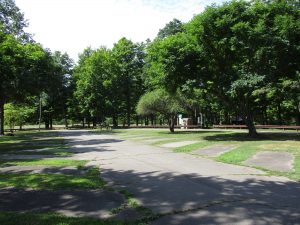 Another issue brought to Litwin’s attention by county planner Lynnelle Farber prior to the meeting is that a board was created about a decade ago to assume responsibility for the Iroquois Trail when discussions ensued about extending it to connect Lazybrook Park in Tunkhannock Township with Riverside Park in Tunkhannock Borough. The trail eventually fell under the auspices of an Industrial Development Authority (IDA) that has come and gone over the years for the purpose of funneling and overseeing grants.

At Litwin’s suggestion, the commissioners agreed to look into the matter more closely to ensure that a new board would not duplicate previous efforts or work against them.

The board also agreed on Tuesday to hire Patrick Robinson as an independent contractor to provide cleaning services for county buildings at a cost of $67,000 annually. The county currently has three cleaning positions open as a result of offering buyouts to long-term county employees in an effort to save money. The month-to-month agreement with Robinson, who came highly recommended, will save the county approximately $106,000 per year. The positions have not been eliminated and can be filled again at any time the commissioners feel that it is necessary.

No News is Good News?

There was no new information available about the future of Tyler Memorial Hospital, though Wilbur suggested that the process of another hospital taking it over and reopening it is ongoing.