Approximately two dozen youths (top) were among the participants at the July 28 Northern Tier Holstein Show held at the Harford Fairgrounds. Each received an event T-shirt from ST Genetics. Emory Bewley (below, second from left) and Tyler Soden (second from right) are congratulated at the Northern Tier Holstein Show as reserve champion and grand champion, respectively, by judge Aaron Eaton (right) and (from left) Caleb Darling and Chad Johnson of Williams Companies, which sponsored lunch for the event. 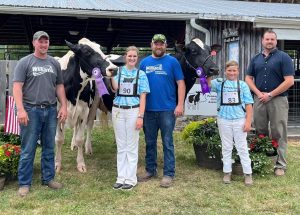 The Pennsylvania Holstein Association conducted the annual Northern Tier Holstein Show at the Harford Fairgrounds in New Milford on July 28, giving many local families an early opportunity to exhibit their dairy cattle ahead of this year’s Harford Fair. Judge Aaron Eaton placed more than 100 entries. Some cows fit more than one category, so overall participation was considered to be on par with events from previous years.

“It was a great group of kids, and the quality was definitely there,” said Dana Empet of Empet Farms, who also served as the Red & White Holstein chairperson for the competition. This was the first show of what quickly becomes a very busy season, especially for the youths. It was followed by a 4-H sanctioned show on Saturday, and many of the same youths will show again during the Harford Fair, which runs from Aug. 15 to 20. After the Harford Fair, cattle exhibitors will prepare for the All-American Dairy Show at the Farm Show Complex in Harrisburg.

While the 4-H show was open to all breeds of cattle, the July 28 event involving about two dozen youths focuses on Holsteins. Organizers and participants work hard to keep it going in the face of a declining number of dairy farms in the area.

“As far as the dairy program goes, it’s holding its own,” said Empet, who works with youths involved in many types of farming. “But when it comes to sheep and goats and pigs, there is a greater interest and more youths showing.” The Northern Tier Holstein Show is also held at the same time as the Troy Fair in Bradford County, which Empet feels impacts the participation rate. “Timing is everything with most things you do,” she remarked. Nonetheless, there were showers from numerous counties in Northeastern Pennsylvania.

Another thing that is unique about the Holstein Show is that it is more familial than most competitions, a fact that appeals to Chad Johnson of Williams, one of a record number of sponsors this year. “There were showers of all ages, including children five and six years old all the way through adults,” he related, adding that the weather was perfect.

Families started arriving on Wednesday afternoon to register their entries, get the cows cleaned up and enjoy some social time before getting a good night’s sleep with visions of blue ribbons and champion banners in their heads. Thursday morning saw a flurry of activity as the cows and handlers got a final grooming.

“I think that families enjoy this event so much because it provides such a great avenue to show the dividends of hard work and commitment to raising quality animals,” Johnson offered, adding that most of the hard work takes place behind the scenes. Johnson comes from a dairy farm background but is still amazed at how much hard work and time the family members are willing to commit just to get their animals into the arena.

Big winners on July 28 included Tyler Soden and Emory Bewley, who wrapped up the day as Grand Champion and Reserve Champion, respectively. Soden also won the junior and open contests in the Red & White Youth Division, and Bewley was the big winner in the Black & White Youth Division. Madison Soden picked up numerous wins in the Open Holstein categories, including Reserve Intermediate Champion in both the Youth and Open division. Delaney Curley took ribbons as Reserve Champion in both the Youth and Open Red & White division, as well as Best Animal Bred and Owned. Sweet Pease Holsteins was named Premier Exhibitor and Premier Breeder.

Denise Pease of Sweet Pease Farms served as the Black & White Holstein chairperson. She agreed that this year’s event went very smoothly and complimented everyone involved. “The judge did a great job,” she said of Eaton. “He’s nationally known.” Good judges provide clear explanations of what it is that they are looking for and why the winning animals are exceptional, which helps youths better understand how to posture their entries as the judge makes their way around the arena. Pease was also pleased with increased community support for the kids. “It has grown over the years. I think we hit a few new people this year, and I think that helped.”

“As an organizer, we were really appreciative of the support of all of the sponsors,” Empet concurred. “It allowed us to give the participants more prizes.”

Narrowsburg Feed & Grain provided pizza for participants on Wednesday evening, and Empet Dairy Consulting supplied ice cream. ST Genetics bought the colorful matching T-shirts for those competing as youths. And Williams Companies brought in staff and large grills to feed everyone cheeseburgers and hot dogs for lunch, which has become a staple of the show.

“My summer wouldn’t be complete without attending this event,” said Tammy Bonnice of Williams. “I enjoy watching the participants walking their cows around the ring. I feel nervous for them but also proud of them. And I’m proud to work for a company that truly cares about events like this and being part of the community.”

“We couldn’t have done any of that without the support of the sponsors,” said Empet, noting that each of the junior exhibitors also received a gift on Wednesday evening which was paid for jointly by the supporters. 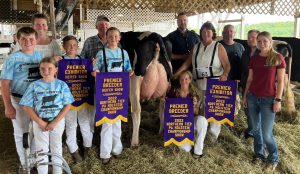