Visitation to Resume at Prison – Incentives Offered for Vaccinations 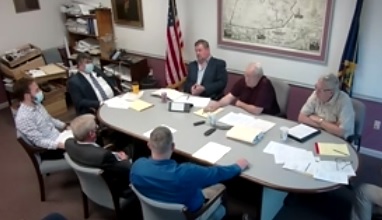 The Wyoming County Prison Board agreed this morning to resume in-person visits to inmates at the correctional facility in Tunkhannock by Monday, June 7. A lengthy conversation among board members ensued after warden Ken Repsher announced that the Pennsylvania Department of Corrections had approved visitation, which has not happened in Wyoming County since March 2020 when pandemic-related shutdowns began.

“The inmate population has been very understanding,” Repsher remarked. “That doesn’t mean they are happy about it.”

All in attendance were in favor of allowing visitation, but several voiced concerns about the potential introduction of the coronavirus into the facility. “Some prisoners got the COVID shot, but it’s a very small portion,” commissioner Tom Henry stated. “I think that’s an important factor even though the state is opening things up.”

After discussing how other counties and states are handling the situation, Repsher assured board members that visitation at the jail in Tunkhannock has always been noncontact. “We already have a secure location where there is no contact,” he related, adding that his primary reservation is not knowing the COVID status of the visitors.

Judge Russell Shurtleff is in favor of allowing visitations again, noting that the past year has been especially difficult for inmates who were already suffering from depression and other metal health issues. “Family support is very important to them,” he stated.

Board members and Repsher agreed that 13 days should give them enough time to establish protocol that might include scheduling visits 15 to 20 minutes apart, having visitors wait outside the jail until it is their turn, and asking visitors to wipe down their seats before they leave the room. All guests will be subject to temperature checks and must wear masks.

The time between now and June 7 would also provide enough time for inmates to update their visitation lists, Repsher noted. But, he added, “I don’t believe that we are ready yet to open up for church services or ABT visits.”

Wilbur responded that he didn’t see a need to open up everything at once. “I think this is a big step just getting it opened up to visitors,” he remarked.

Commissioner Tom Henry made the motion, seconded by commissioner Ernie King, to resume in-person visitation. Commissioner Rick Wilbur agreed, with the stipulation that the process move forward under whatever restrictions the warden deems necessary, and the motion was carried.

“He will set the rules. He runs the prison, and we trust him to do that,” Wilbur said of Repsher.

Another topic that evoked serious conversation was whether or not to follow the lead of other correctional facilities to provide a monetary incentive to inmates to get vaccinated against COVID. The practice has helped larger prisons in the state effectively reduce coronavirus transmission within their walls. The money would come from the state as part of a COVID relief bill and not from the county’s general fund. It would be deposited in the inmate’s commissary fund and not presented to them as a cash payment.

Commissioner Wilbur acknowledged that the plan has its critics, but there appeared to be no disagreement among board members that a vaccinated jail population would relieve a lot of concerns. To date, only a handful of the inmates have received shots, though staff is fully vaccinated.

“It behooves us to have that done for them so that, when they come back out to society, they are vaccinated,” Wilbur stated. Other prisons are waiving fees for prisoners, which Wilbur suggested would be a harder sell to the public.

The other consideration brought up by Judge Shurtleff was that the timing of the two-shot vaccines might not parallel the stays of short-term inmates. Commissioner Henry indicated that doses of the one-shot Johnson & Johnson vaccine, which he believes are available, might provide the solution to that dilemma.

“The climate has changed over the past two months,” Wilbur agreed. “It’s not like there are no vaccines available.” He also suggested making arrangements with the vaccination team that will be administering shots to Tunkhannock school students next to go directly to the prison from the school to administer whatever doses they have left that day.

A motion was made and carried unanimously to provide the $25 commissary incentive to prisoners who elect to get the COVID vaccine as soon as plans for implementation can be finalized. If the single-shot vaccine is not available for inmates sentenced to the facility for 30 days or less, Wilbur noted, they would not be eligible for the incentive.

There are currently 44 men and 11 women in the correctional facility, which has maxed out the available space.

2021-05-25
Previous Post: Trout Derby’s Move to New Location a Big Success
Next Post: Bluegrass Festival at Tunkhannock to Offer More Than Ever Before