Too Warm for Weekend Snow? 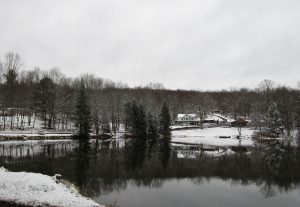 While some may have seen Wednesday morning’s snow and gray skies as gloomy, the light wintery weather was beautiful to others. Here, some cabins at Shore Forest Campground near Hop Bottom in Susquehanna County are reflected on Tanner Pond.

Forecast models differ slightly, but most indicate that a storm approaching the region tomorrow evening and lingering into Saturday will be mostly rain. Any drop in temperatures by four or five degrees, however, could result in another coating of snow for higher elevations.

A relatively calm weather patter will persist into next week with slowly rising temperatures.