What is your favorite Christmas movie of all time? Is it associated with a tradition or a childhood memory? Well, there is a good chance that one of your favorite Christmas films will be celebrated at the Dietrich Theater as part of the Dietrich’s Twelve Movies of Christmas. From Friday, December 4 – December 17, the Dietrich Theater will be showing twelve of the most beloved movies of all time in fourteen days. There is something for everyone. And the best part is that admission is free! That’s right! All are welcome to attend for free thanks to the generosity of lead sponsor Ace-Robbins, Inc. and the following local business sponsors: Bell Brothers Well Drilling, The Belt Law firm, P.C., Cabot Oil & Gas Corporation, Century Farm LLC – Kenneth and Caroline Taylor and Tom and Margarita Taylor, The Endless Mountains Visitors Bureau, Kintner Modular Homes, Inc., Lackawanna College, M & T Bank, Nimble Hill Winery & Brewery, Nostalgia Car Wash, P & G Mehoopany Employees Federal Credit Union, Shadowbrook Resort, The Sheldon Family, and the Wyoming County Chamber of Commerce.

When asked how the idea originated, Dietrich Theater Executive Director Erica Rogler gives credit to Jean Ruhf of the Endless Mountains Visitors Bureau, “Every year the Dietrich likes to screen a few classic Christmas movies in December with It’s a Wonderful Life (above) as a must, but this year we had more space in our schedule due to movie releases being pushed back, so when Jean suggested having a Christmas movie festival, the idea for the Dietrich’s Twelve Movies of Christmas was born. Plus we felt like our community could use a little holiday cheer, and what better way to get into the holiday spirit than with Christmas movies.” Dietrich Theater General Manager and Film Booker Ronnie Harvey curated the Dietrich’s Twelve Movies of Christmas to include classics and favorites for a variety of ages. The slate of films include: A Christmas Story, Elf, Bad Santa, Scrooged, How the Grinch Stole Christmas, Krampus, It’s a Wonderful Life, Love Actually, Holiday Inn, National Lampoon’s Christmas Vacation, Polar Express, and White Christmas.

*The Dietrich is operating at 20% capacity and is following CDC guidelines for mask wearing and social distancing. Face masks are required to enter the theater and must be worn at all times when navigating the theater. Once seated in socially distance seat, mask may be removed to enjoy popcorn and other concession items.

The following are movie showtimes and film synopses for the Twelve Movies of Christmas:

Willie T. Stokes, played by Billy Bob Thornton, is a convicted con man who’s led a miserable life. On Christmas Eve, he and his helper Marcus pose as Santa and his Little Helper to stage elaborate robberies and take department stores for everything they got. However, Marcus must once again put up with Willie’s heavy drinking and a series of incidents including a troubled kid. 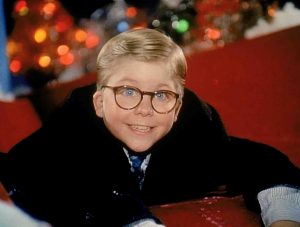 Christmas is approaching and 9 year-old Ralphie wants only one thing: a Red Ryder BB gun. Ralphie attempts to convince his parents, his teacher and Santa that a Red Ryder BB gun really is the perfect Christmas gift, but when the big day arrives he gets lots of present under the tree including a lovely gift from his aunt that his mother just adores. But what about the BB gun?

When his dysfunctional family clashes over the holidays, young Max (Emjay Anthony) gets disillusioned and turns his back on Christmas. Meanwhile, this lack of festive spirit unleashes the wrath of Krampus: a demonic force of ancient evil intent on punishing non-believers. All hell breaks loose as beloved holiday icons take on a monstrous life of their own, laying siege to the fractured family’s home and forcing them to fight for one another if they hope to survive.

Buddy (Will Ferrell) was accidentally transported to the North Pole as a toddler and raised by Santa’s elves. Unable to shake the feeling that he doesn’t fit in, the adult Buddy decides to travel to New York City to locate his real father.

In this modern take on Charles Dickens’ “A Christmas Carol,” Frank Cross (Bill Murray) is a wildly successful television executive whose cold ambition and curmudgeonly nature has driven away the love of his life. After firing a staff member on Christmas Eve, Frank is visited by a series of ghosts who give him a chance to re-evaluate his actions and right the wrongs of his past. 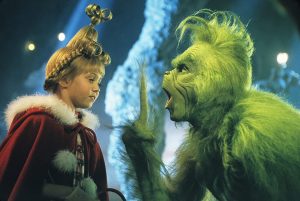 How the Grinch Stole Christmas

In this live-action adaptation of the beloved children’s tale by Dr. Seuss, the reclusive green Grinch (Jim Carrey) decides to ruin Christmas for the cheery citizens of Whoville. Reluctantly joined by his hapless dog, Max, the Grinch comes down from his mountaintop home and sneaks into town to swipe everything holiday-related from the Whos. However, the bitter grump finds a hitch in his plans when he encounters the endearing Cindy Lou Who (Taylor Momsen).

George Bailey has so many problems he is thinking about ending it all – and it’s Christmas! As the angels discuss George, we see his life in flashback. As George is about to jump from a bridge, he ends up rescuing his guardian angel, Clarence – who then shows George what his town would have looked like if it hadn’t been for all his good deeds over the years.

*Reservations are REQUIRED for this event*

Nine intertwined stories examine the complexities of the one emotion that connects us all: love. Among the characters explored are David (Hugh Grant), the handsome newly elected British prime minister who falls for a young junior staffer (Martine McCutcheon), Sarah (Laura Linney), a graphic designer whose devotion to her mentally ill brother complicates her love life, and Harry (Alan Rickman), a married man tempted by his attractive new secretary.

In this Irving Berlin musical, Jim (Bing Crosby) and Lila are members of a performing trio who plan to quit and run a country hotel. When Lila says she has fallen in love with the dancer in the act, Ted (Fred Astaire), Jim leaves town with a broken heart. After turning the inn into a holidays-only live entertainment venue, Jim winds up booking and falling for Linda (Marjorie Reynolds). But when Ted shows up at the place after being dumped by Lila, he too sets his sights on beautiful Linda.

As the holidays approach, Clark Griswold wants to have a perfect family Christmas, so he pesters his wife, Ellen and children, as he tries to make sure everything is in line, including the tree and house decorations. However, things go awry quickly. His hick cousin, Eddie and his family show up unplanned and start living in their camper on the Griswold property. Even worse, Clark’s employers renege on the holiday bonus he needs.

When a doubting young boy takes an extraordinary train ride to the North Pole, he embarks on a journey of self-discovery that shows him that the wonder of life never fades for those who believe.

After leaving the Army, Bob Wallace and Phil Davis team up to become a top song-and-dance act. Davis plays matchmaker and introduces Wallace to a pair of beautiful sisters, who also have a song-and-dance act. Wallace and Davis follow decide to follow Betty and Judy as they travel to a Vermont lodge to perform a Christmas show, only to find their former commander, General Waverly, as the lodge owner. A series of romantic mix-ups ensue as the performers try to help the General.