The Rollercoaster Ride to Winter Has Begun 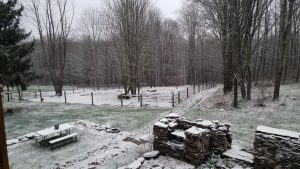 A coating of snow greeted some residents of the Endless Mountains this morning, including at the Artisan Alpaca Farm near Dushore in Sullivan County (above). Snow showers may persist as the wind picks up today, though any accumulations should only be in the higher elevations.

After a record-breaking stretch of November warmth, temperatures have taken a rapid slide back into freezing territory with tonight likely to be the coldest night of the season so far.

Milder temperatures should make a comeback this weekend, with some forecast models suggesting highs near 60 Friday through Sunday, depending on how much sun gets through stubborn clouds.