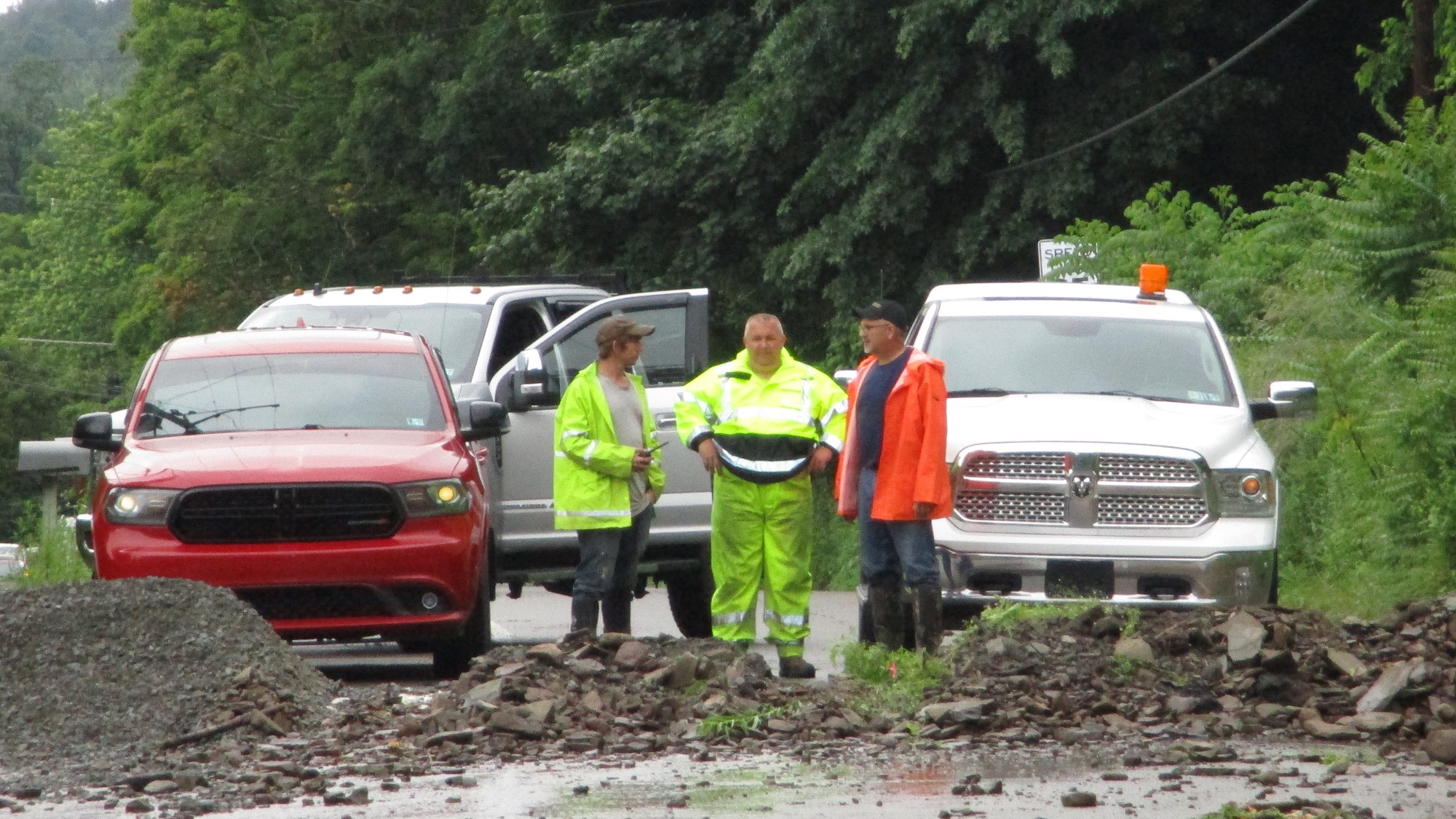 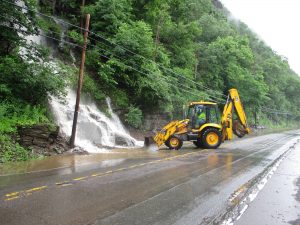 For at least the fifth time in a year, muddy water, rocks and other debris flowed freely across Main Street in Laceyville and Route 6 in Skinners Eddy, two communities in the northwest corner of Wyoming County that seem lost in a no-man’s land without immediate nor long-term assistance. Once again, a few key people from each municipality stepped up to do what they could to provide safety and mitigate circumstances to prevent worse damage. 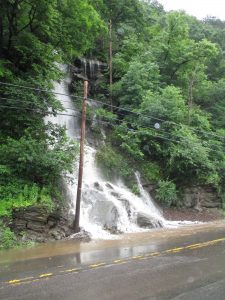 In Skinners Eddy, runoff rain water cascaded down the cliff that flanks US Rt. 6 on it’s north side, quickly overwhelming storm drains and filling the highway. The major thoroughfare was alternately closed and reopened to just one lane of traffic as a PennDOT backhoe scooped up rocks and boulders collecting at the base of a massive waterfall. PennDOT also placed a Road Closed sign on Rt. 6 at Meshoppen, but there were no authorities there to provide any additional direction for local residents nor truck drivers. 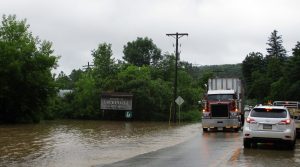 According to Braintrim Township supervisor Frank Holdren, the loader was the only help provided by PennDOT District 4 in lieu of his request for additional assistance. Calls from the borough of Laceyville were also unheeded. Borough council president Randy Brigham said that he was told that there was no personnel available to assist him. Granted, the flow of water and debris down Main Street into homes there was not life-threatening, but the extant of Wyoming County’s crisis was limited to that tiny corner of the county.

Before gathering some people to help him direct traffic along the highway, Holdren delivered a Road Closed sign and a scoop of modified gravel to Main Street, where Brigham had already constructed a makeshift diversion dam, a procedure that has become an all too-routine quick fix in Laceyville. Brigham was assisted with the placement of signs and other tasks by borough water supervisor Jaye Butler. 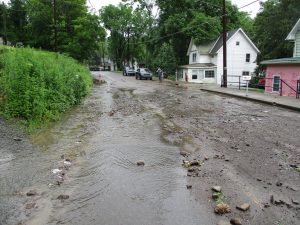 Before the water could be deviated, Main Street resident Heather Schillaci placed traffic cones in front of her house and dug debris out of the two storm drains in front of her home by hand to prevent any more water from breaching the curb and flowing into her home. “This is the worst it has been,” she explained after the water receded. Schillaci (above, in background) had lost a bit of her front lawn during the floods last summer, but Tuesday’s event quickly eroded the repairs that had been made and further gouged a trench alongside her house (below) and on to the back yard toward the railroad tracks. 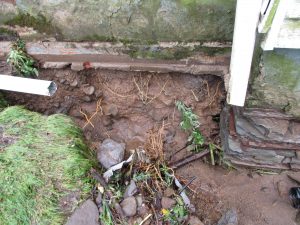 The house next to her was at one point surrounded by water that eventually filled the back yard, prompting the children at that residence to inflate floatables and have some fun in the sudden pond. Their mother ordered them out of the water, however, when a fog began to form (below) from the gas bubbling up from the ground underneath. That was only part of the stench of fuel that hugged the town. 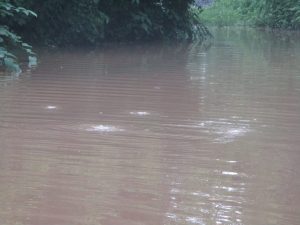 Meanwhile, above the downtown area, Bluhm’s General store had taken on copious amounts of water that had come gushing down Spring Hill and over Second Street. The usually busy store and gas station was closed through the afternoon as family members and employees pushed water and mud out the front door of the building.

At the west end of Laceyville, runoff from familiar fields bypassed Little Tuscarora Creek and coursed toward Brigham’s Meat Hook restaurant and Huffmans Service Center. Laceyville was eerily quiet with access to Main Street limited to Church and Maple streets.

After back-to-back storms in August 2018, Schillaci attended a borough council meeting and asked if the curbs in front of her home could be raised to stave off future flooding, noting that repaving of the street over the years had reduced the height of the curb to less than three inches. Council members told her that they doubted rebuilding the curbs would be much help. On Tuesday, it was clear that higher curbs would have prevented the damage done to Schillaci’s property, even if it simply pushed the water farther down Main Street toward the historic Oldest House.

While studies have shown that much of the runoff in the western end of Laceyville originates in fields in neighboring Tuscarora Township in Bradford County, Brigham blames the flooding at the east of town on the angle and narrowing of drainage pipes under Main Street.

“It goes into a 15-inch pipe here,” he explained, gesturing to a submerged point on the north side of the street, “hits a 90-degree angle, then flows into a 12-inch pipe down there,” his hand pointing toward Schillaci’s home. The borough is negotiating to purchase a right-of-way that will allow for the installation of a new, wider pipe that will take the water directly under Main Street and out the other side.

Brigham has spent several months walking FEMA officials around town as a follow-up to last year’s flooding, in hopes of getting some funding to complete several phases of remediation of drainage issues. His reports at subsequent borough council meetings seem to indicate that the Federal Emergency Management Agency just keeps requesting more information without ever agreeing on the source of the problems nor a solution. The borough’s proximity to Braintrim Township only seems to befuddle agency representatives, who should be experts at dealing with border lines to which flood waters pay no attention.

“It’s getting ridiculous. I feel bad for the tractor trailer drivers,” said Frank Holdren, still directing traffic on a state highway in lieu a visit from any state officials well after the rains had stopped. “I’ve got a 19 year-old working down at the other end. We shouldn’t be doing this.”

Wyoming County EMA director Gene Dziak reported that county officials did visit the Laceyville area in the morning and were told by the Laceyville fire chief that the fuel odor smell, which residents claim was worse than at any time last year, was not a problem. The source of the odor had not yet been identified by Tuesday afternoon, but Brigham told Porter on Wednesday morning that he had noticed remnants of fuel on basement floor of an old discount store that had been recently dismantled.

As of 3:30 pm, Brigham reported that Main Street in Laceyville had been reopened from one end of town to another, but much work was left to be done clearing debris and opening storm drains. 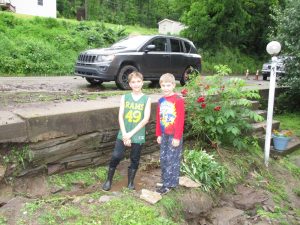 Heather Schillaci’s sons Jayde (left) and Tristan stand in a part of the front yard that, last summer, was part of a gentle slope away from the curb. 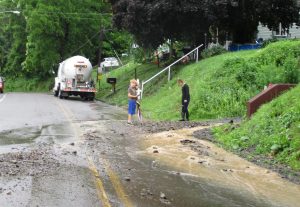 A fuel company makes a routine delivery to a Laceyville resident as waters receded in the east end of town. 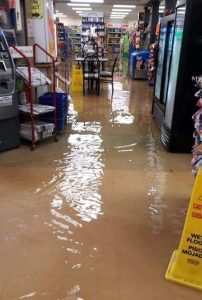 The “wet floor” signs at Bluhm’s General Store as seen in this photo posted on Facebook by Cindy Brink may seem a bit ironic, but flooding throughout Laceyville this morning was no joke for residents tired of bureaucratic red tape and a lack of action. 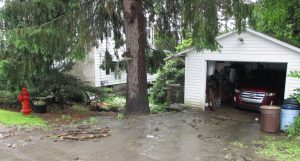 Mel Crouse’s garage is once again the recipient of a deluge of mud, stones and other debris. The Main Street resident had to install a drain in the floor of the garage last year after summer flooding left water a foot deep inside. 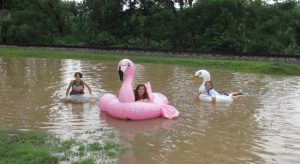 Taking advantage of a back yard filled with storm runoff are (from left) Curtis Kunkle, Mia Brewer and Chloe Kunkle. They were ordered out of the water, however, when a fog caused by bubbling gas from an unknown source started to take over the scene. 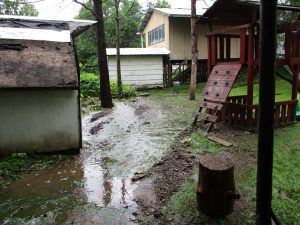 The path of the flood waters through Schillaci’s back yard on Tuesday are evident. 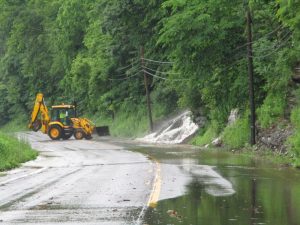 A PennDOT backhoe arrives on the scene in Skinners Eddy to remove rocks and other debris from Route 6.