In: Weather Alert
With: 0 Comments 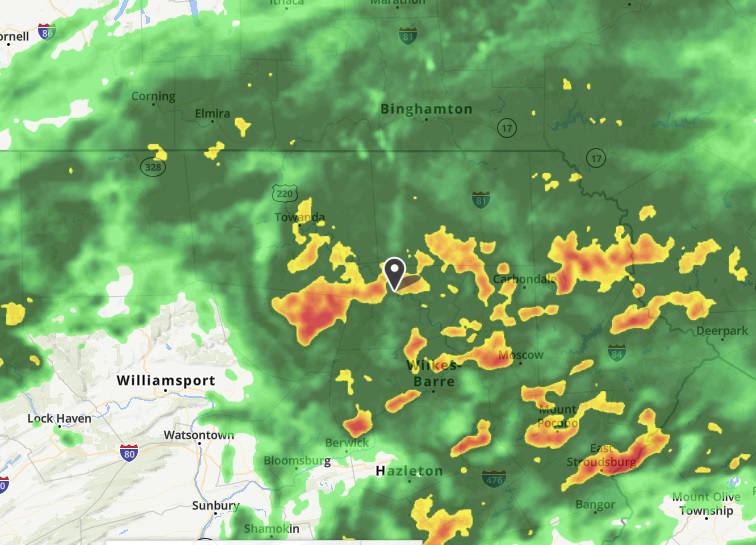 Weather.com radar at 10 am (above) showed the mass of rain moving over the Endless Mountains that will continue well into the afternoon.

The National Weather System has issued a Flash Flood Watch for Bradford, Susquehanna, and Wyoming counties through 4 pm Tuesday as a soggy weather system moves slowly from west to east across the region. Due to already saturated ground, some flooding is expected. 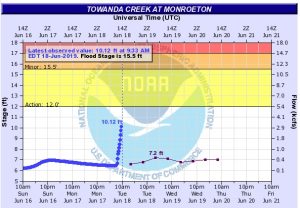 Street flooding in areas with known drainage problems is likely, as is small stream flooding. Sharp rises are expected along Sugar and Towanda creeks in Bradford County. More moderate increases are expected along Choconut and Tunkhannock creeks in Susquehanna and Wyoming counties. No flooding is anticipated along the Susquehanna River. Street flooding has been reported in Laceyville, and Route 6 at Skinner Eddy in Wyoming County has been alternately closed and reduced to one lane due to rock slides and water.

Another surge of rain is expected between noon and 2 pm, after which skies may clear for a while, giving water a chance to recede. Showers and thunderstorms are expected to return on Wednesday and Thursday. The chance of precipitation diminishes into the weekend.