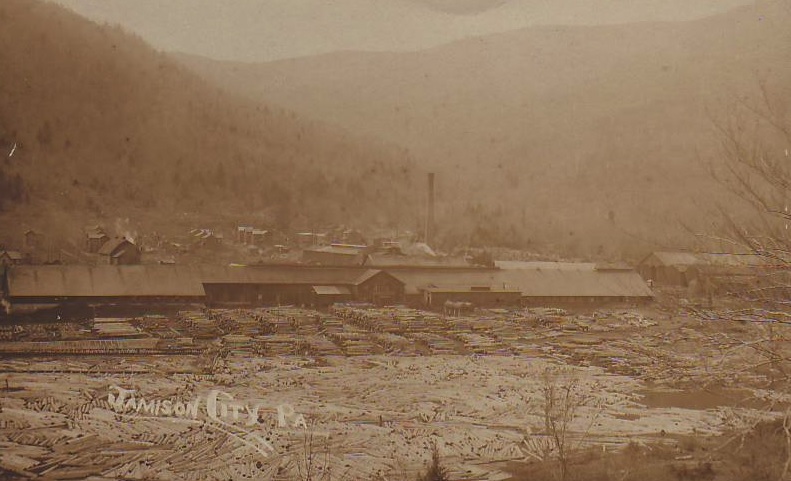 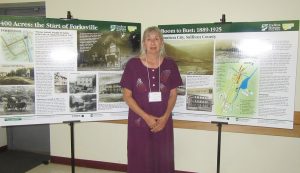 Representing both the Sullivan County Historical Society and the Endless Mountains Heritage Region, Melanie Norton (above) displays copies of the interpretive historic panels that have been erected in Forksville and Jamison City.

The official dedication for the Jamison City historic sign will be held there on Friday, June 28th at 1 pm. All interested persons are welcome to attend the event, which will be held outside, weather permitting. The sign is located on the dirt road that comes straight thru Jamison City proper and is right across from the smoke stack. Jamison City is accessible from Rt 187 via Central Road and off Rt 487 via Jamison City Road.

The Sullivan County Historical Society has been working with the Endless Mountains Heritage Region (EMHR), which distributes funds for Department of Conservation & Natural Resources (DCNR), to place historic signs in Sullivan County. These funds require a match, which for both the Forksville sign placed in 2018 and a new Jamison City sign, were offset by a donation from Chief Oil & Gas Company. The signs depict the history of the place they are set in and provide background to the establishment and life of a particular region.

The interpretive panel for Jamison City is titled “Boom to Bust: 1889-1925” and provides information on the town, the tannery and a map depicting where prominent structures once stood. This settlement was divided between Sullivan and Columbia counties. The Bloomsburg and Sullivan Railroad’s official and financier of the railroad, named Benton K. Jamison, was who the town was named for. Ironically, it was first named for an original land owner by the name of Col. John Jameson.

For the next 36 years, this community thrived with a population between 350 to 500 residents.  The fluctuation of people mirrored the availability of and demand for its resources. Initially, abundant virgin timber fed the mill there, and hemlock bark met the demands of the leather tannery.

The timber was exhausted and by 1924, and the discovery of acetone for tanning (which negated the use of hemlock bark for tannic acid) rang a death knell on the town’s survival.  These factors were coupled with the availability of automobiles becoming more affordable and popular, which lead to the demise of the need for horses – ergo leather tack. The 2010 census lists the population for Jamison City at 134.

For the present, it was the intent of the Society to dedicate this sign last year but the event was preempted by serious flooding in September. It was postponed again this spring by a late thaw.

In May, students under the direction of Jackie Johnson of Red Rock Job Corp Center, students Giovanny Irizarry and Randell McCaskill helped with the “planting” of the sign at the site across from the tannery’s 160 foot tall smoke stack on the property of Monty Kopec.

Both enrolled as auto techs, Irizarry of Allentown is still enrolled at the school, and McCaskill of Philadelphia graduated this spring.

Society members are grateful for their kindness, interest and eagerness to help in this project.  Also present were Melanie Norton, president of the Society; John Smithkors, member of the Society’s Board of Directors; and John’s border collie, Sadie.

While they were busy with the sign, seven or more young men from red Rock were planting trees from the Forestry Department throughout the woods surrounding the remaining buildings of the tannery and saw mill.