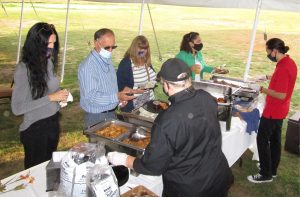 Guests enjoy their own slice of safe haven in the “Blue Zone” at the Chamber event on Sept. 24.

With so many popular annual events and fundraisers canceled this year because of the pandemic, the Wyoming County Chamber of Commerce FallFest Mixer was literally a breath of fresh air for participants. Held on Sept. 24 at Shadowbrook Inn & Resort east of Tunkhannock, FallFest attracted nearly 200 members of the business community who were spread out between the main lodge and the golf course.

Cabot Oil & Gas Corporation was the event sponsor, and Meshoppen Stone covered the cost of entertainment. Three food and beverage zones that allowed for safe distancing were sponsored by Holcombe Energy Resource, Penelec, and UGI. Thirteen additional Chamber supporters rounded out the list of those patronizing the event. The beautiful fall decorations were sponsored by Monzie’s Floral Design.

Temperatures in the 70s and puffy clouds chasing the sun across the autumn sky provided the perfect backdrop for the event, which included food prepared by the Shadowbrook staff, a basket raffle, and a chipping contest on an adjacent green that proved a bit more difficult than expected.

“Congratulations to Gina Suydam and the Chamber for executing such an enjoyable event under such unusual circumstances,” said Cabot external affairs manager Bill desRosiers. “Cabot is proud to work with our partners in the energy industry to get more activities like these back on the calendar as conditions allow.”

“The FallFest Mixer was a nice night out for those wanting to see some familiar faces,” said Suydam, Chamber president. “The Chamber and Shadowbrook staff worked diligently to follow the PA Department of Health and CDC guidelines for safe gatherings.”

Dave Kintner of ERA Brady Associates won the Shop Small/Shop Local basket raffle. The chipping contest, conducted this year as an alternative to a putting contest, yielded no big winners. Volunteers joked afterward that they allowed a broader interpretation of the rules to give some prizes away to participants.

“We had a wonderful night and accomplished our goal of bringing the business community together for a safe and fun networking experience,” Suydam remarked. “The Chamber is extremely grateful for the contributions from our sponsors. Their continued dedication makes it possible for us to support our small businesses.” 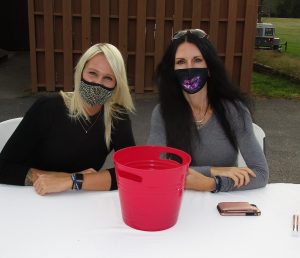 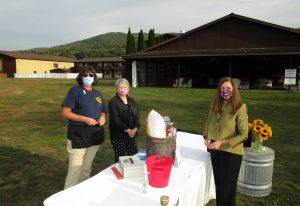 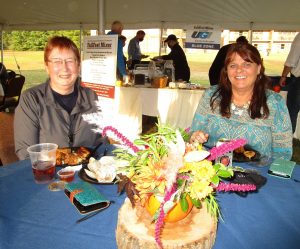 Betty Seelenbrandt (left) and Sue Gumble of the Lackawanna College School of Petroleum & Natural Gas enjoy their meal at the Chamber mixer. 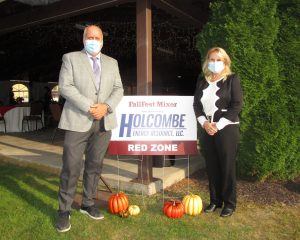 Gary Fenton and Alice Davis of the Susquehanna County Career & Technology Center prepare to get their dinner in the Fallfest “Red Zone,” which was sponsored by Holcombe Energy Resource. 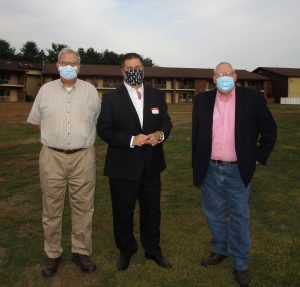 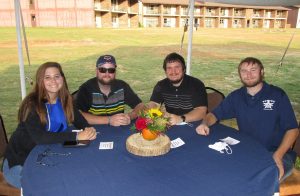 Reeves Rent-a-John was one of 13 “Chamber Supporters” for the event, represented here by (from left) Felicia Guiles, Ray Reeves, Ryan Reeves, and DJ Sinker. 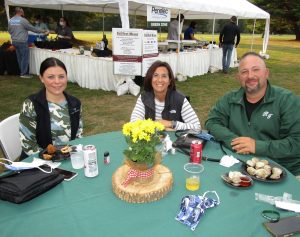 From left, Megan, Renee and Damien Rutkosi of Rutkoski Fencing enjoy food and beverages in the setting sun. 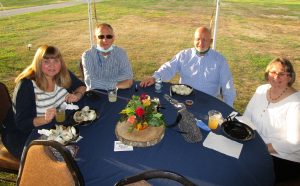 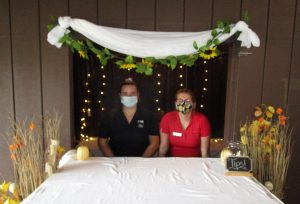 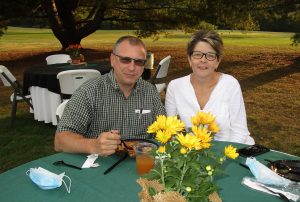 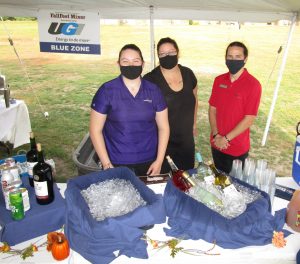 Shadowbrook servers in the “Blue Zone,” which was sponsored by UGI, included (from left) Adaka Flores, Ashley Kinney, and Michael Casey. 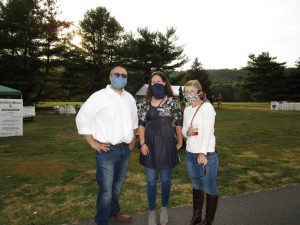 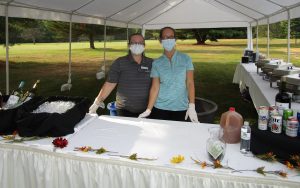 Preparing for guests in the “Green Zone” were Chynna Jackson (left) and Stephanie Renoll. 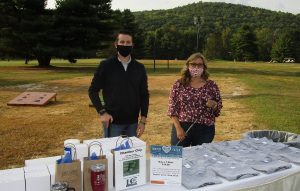 Setting up the chipping contest at the FallFest mixer were Glenn Layaou (left) and the Chamber’s Allison Schultz. 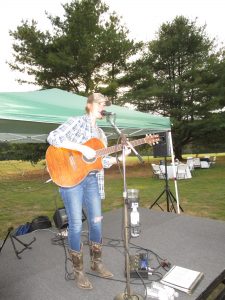 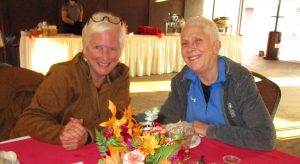 Long-time Chamber supporters Connie Adams (left) and Jeanne Wisnosky find a quiet spot to catch up and enjoy some food and beverages.