Athens Borough Fire Department officers (above, from left) Pat Cotton, captain; Mike Polzella, assistant chief; Mike Davidson, assistant chief; and Jason Chandler, chief, exhibit the new sonar imaging equipment installed in their jet-powered rescue boat. The unit, which was purchased with a grant from Williams Companies, can easily be moved to the inflatable rescue boat in the background as needed.

Northeastern Pennsylvania’s streams, lakes and ponds are treasured for their aesthetics and recreational possibilities, including fishing, boating, and swimming. But accidents can and do happen in our waterways, and our local fire companies are usually tasked with rescue and recovery operations when recreation turns to misadventure.

Early in 2020, Williams Companies allocated $3,500 to the Athens Borough Fire Department for the purchase of a Humminbird Solix 10 unit and accompanying software that features side scan and down imagining. Serious anglers have been using similar equipment for years as a way of finding big fish, but the instruments have become a valuable tool as well for first responders.

“Dive teams are few and far between, and it takes a lot of equipment to do this,” said Athens Fire Department captain Pat Cotton, also a member of the Athens Borough Water Rescue Team.

The new unit at Athens is the only one in Bradford County and was put to the test in neighboring Susquehanna County in mid October. 73-year old Richard Malecki of New York state had been reported missing at Big Elk Lake near Dimock. His car had been found nearby, and his empty fishing boat was floating on the water. A dive team from Tunkhannock in Wyoming County had been called to the scene, but more help was needed.

“It’s a pretty big lake,” Cotton related. “There was a lot of area to cover.”

PA Fish & Boat Commission waterways conservation officer Jeremy Yohe, who is also a member of the Athens fire company, alerted members of the Tunkhannock Station 1 Dive Team of the availability of Athens’ jet-powered rescue boat and the new equipment, and they were requested to aid in the search.

The Humminbird unit uses sonar to identify solid matter in the water. Using a small screen on the boat, the operator can control the direction of the scan, which includes providing a sideways view. The boat makes passes across the waterway, and the data is recorded on an SD card that is then plugged into a laptop with Search & Rescue (SAR) Hawk software for viewing in higher definition.

“It allows for the command post to start analyzing data right away,” Cotton explained. “You can zoom in. You can take pictures, and you can measure.” Being able to estimate the size of an object up to 200 feet below the boat is especially important, Cotton noted. “It allows you to eliminate things.” 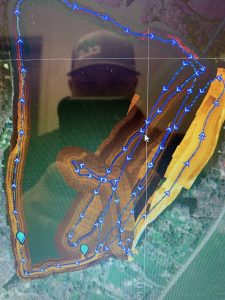 One way to look at the data is to overlay the image of the precise track the boat took back and forth on the water on a satellite map (above). “This is a tremendous help because, once a target is found, we are able to pull the GPS coordinates for the exact location for the boat to mark and divers to dive to check the possible target,” said Cotton.

Recovering a body from murky waters is an unpleasant task, to say the least, but the advanced technology reduces the risks to divers by giving them a more direct approach and also the wait time for loved ones. Malecki’s body was recovered on the second day of the search in about 60 feet of water, but not before the dive teams analyzed a variety of images produced by the sonar equipment, including a submerged, contorted log (below) that initially looked like a body. 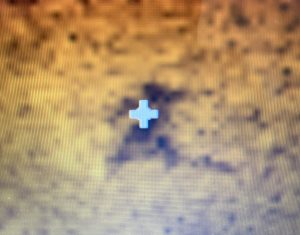 “You’re not actually going to see a person. It’s more of a shadow,” Cotton noted. There is a lot of “seat time,” he said of the process of learning what to look for. “It’s how you interpret the information.”

In the past two years, two vehicles have plunged into the Susquehanna River at Athens, resulting in the drowning of the occupants of one of the vehicles. The river was high and muddy, and the search for the vehicle with the use of poles, grappling hooks, and intuition was tedious and time consuming. The new equipment would certainly have made the fire department’s work easier, Cotton maintained.

This past summer and fall, the river has been extremely low, so the dive team at Athens has not had as many opportunities for practicing with the new sonar equipment as had been planned. In the meantime, crew members can learn virtually by reviewing and analyzing data recorded from missions conducted by others on YouTube and several social media groups. “We expect six to eight members to have a really good handle on running it,” Cotton stated.

In an email to Williams after the Elk Lake mission, Cotton remarked, “This goes to show that your donation didn’t just help our county and local fire departments but also many neighboring counties to our north, south, east and west. This is a huge asset to have located here for future needs.”

Fire department chief Jason Chandler agrees that the Athens Borough Water Rescue Team will likely be called on more often, even from neighboring New York state, now that word is getting out that they have the equipment.