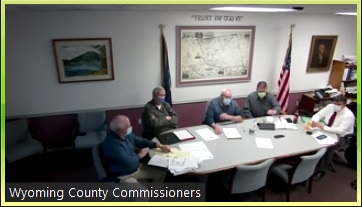 Phones in the Wyoming County Commissioners office started ringing off the hook when word slowly got around that PennDOT was planning to close a stretch of Route 92 for five months and establish a tortuous detour. At the core of the project is a stone-laid bridge under the highway near the former EIHAB Human Services campus that PennDOT claims is the oldest of its kind in the county.

PennDOT’s plan, as public officials understood it, was to dismantle the bridge stone-by-stone, pump concrete in to stabilize the bridge, then relay the stone. Historical significance aside, Commissioner chair Rick Wilbur maintained, “We are absolutely against shutting that road down. It would kill businesses out there. That’s one of the most heavily traveled thoroughfares in the county.”

Nonetheless, the commissioners agree that the bridge must be rebuilt. They have been meeting with PennDOT officials, Rep. Karen Boback, and Sen. Lisa Baker to come up with a viable alternative and hope to have a new plan from PennDOT by the next time they meet publicly on Wednesday, Nov. 25.

Sheriff Bob Roberts asked the commissioners to allow for an exception to the rule for those pursing or updating licenses to carry firearms. While most of the process can be completed by mail, he noted, the final stage is an in-person visit which is done at the courthouse. The appointments, conducted one at a time, must be prearranged, as no walk-ins will be permitted.

Though there have been no positive COVID cases in the Robinson Building in Eaton Township, employees there have expressed concerns about potential exposure from clients, necessitating the closure of that building as well. All three buildings have been fumigated and thoroughly sanitized since the break-out was announced after Election Day.

Even when the public is granted access again to the county buildings, Wilbur maintained, a strict mask-wearing policy will be imposed. “If someone has a problem wearing a mask,” he stated, “We will make arrangements to go outside to talk to them.”

Though a battle over the presidential election wages on nationally and at the state level, commissioner Ernie King was proud to note that Wyoming County was one of only three in the Commonwealth to finish counting mail-in ballots prior to midnight on Nov. 3.

The commissioners expressed optimism for the reopening of Roadside Rest in Eaton Township after a series of meetings and several clean-up work sessions at the park along Route 29.

“It’s looking like its old self again,” commissioner Tom Henry said of Sunday’s efforts by several organizations, business leaders and school students. “If you drive by, it doesn’t look like it did before.” The county will continue to work with Eaton Township on some ideas for opening and staffing the park to curtail the misuse and littering that forced its closure by PennDOT.

Many meetings scheduled over the past two weeks had to be canceled when COVID numbers in the county and elsewhere began to rise. Some of them are back on the calendar, but most are back to virtual formats.

The commissioners will meet Thursday with officials of Keystone and Lackawanna colleges to discuss ways to increase enrollment of Wyoming County residents at the Keystone campus in Factoryville and the new School of Petroleum & Natural Gas under construction in Tunkhannock. Also on Thursday, the commissioners will meet with representatives of Senior Health Care about the potential for building a 70-unit nursing home in Tunkhannock that would have an Alzheimer’s wing and a cardiac unit.

Next week’s fall CCAP (County Commissioners Association of Pennsylvania) conference will be held virtually on Monday and Tuesday, Nov. 23 and 24. Normally held in Harrisburg or Hershey, the conference will feature two days of meetings but allow two weeks for participants to complete 12 hours of education.

In the midst of trying to hold down the fort, the commissioners seemed taken off guard when Moodis, the company contracted to design the county’s new website, transitioned to the new layout on Monday evening, despite a planned meeting about the launch having been canceled.

According to Wilbur, a server issue prevented migration of all information to the new website, including the public link to the Tuesday morning commissioners meeting. Wilbur asked for patience from people who used the website routinely and expressed hope that all of the irregularities would be worked out over the next few weeks.

The commissioners have received emails suggesting establishing Wyoming County as a 2nd Amendment Sanctuary County. Municipalities that have already done so have passed resolutions that prohibit or impede the enforcement of some gun control measures that are perceived as a violation of citizens’ rights to bear arms. Wilbur said that the county solicitor will look into the legality of such an initiative.

Commissioner Tom Henry noted that restaurants in the area are struggling under CDC COVID guidelines and a general lack of commerce related to the pandemic. “They need our support and our help,” he remarked. Henry suggested that people who are not comfortable with in-person dining consider ordering take-out meals.

The commissioners regretfully accepted the resignation of deputy warden Gordon Traveny whom, Henry related, has been a valuable asset to the county since he was hired to work at the Wyoming County Correctional Facility some years ago. The commissioners will meet soon with warden Ken Repsher to discuss replacing Traveny, who is moving on to Lackawanna County.

The hiring of Jodie Dickson as a new full-time cook at the prison was approved, and applications will be accepted to fill the vacant deputy sheriff position as soon as it can be advertised.