In: Wyoming County
With: 4 Comments 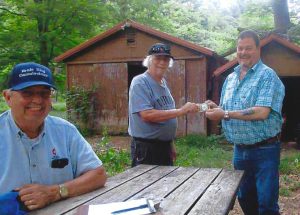 The former Roadside Rest picnic area in Eaton Township, Wyoming County, has been renamed Seneca Trail Park, and members of the Seneca Nation of Native American’s in New York state are thrilled by the news. The nearly 25 acres of fields and towering trees nestled between Bowmans Creek and State Route 29 was once a meeting ground for Seneca people who resided in the area hundreds of years before white settlers to the area arrived.

“We’ve prayed for this for a long time,” said Dr. Gere Reisinger, a modern grower of medicinal herbs and the Pennsylvania Adviser to the Seneca’s Sacred Site Committee. “It was a sad day for us when it closed.”

Pennsylvania is considered by historians to be the birthplace of democracy by virtue of leaders from the 13 American colonies meeting in Philadelphia for the signing of the Declaration of Independence. But, to members of the Seneca Nation, the region that would become Wyoming County was the birthplace of a unique diplomacy among the five Iroquois nations who lived in northern Pennsylvania and most of upper New York state.

“We had the first democracy in the world,” Reisinger explained during a recent meeting at the park. Statesmen George Washington and Thomas Jefferson were invited to send representatives to sit in on council meetings with the Iroquois to see how a democracy worked. “We helped them become the United States. The only difference was that that their democracy was not matriarchal,” Reisinger noted. “They didn’t respect women like we did.”

It was the elder women of the five nations (later six) that convinced the warriors of their respective tribes that it was time to put down their weapons – bury the hatchet – and come together in peace. They believed they had more to gain by working with each other than fighting, especially with two land-hungry European nations – the British and French – knocking at their doors.

Future Wyoming County was considered the “southern door” by which displaced Indians from the eastern and southern colonies were received by the Senecas and given passage to the greater Iroquois Nation, and the Seneca hosted many of the meetings. “Democracy evolved out of here because it was so beautiful. It stimulated the mind,” Reisinger remarked. “When you came here, the beauty shimmered. You knew you were in a special place. We were blessed to be here as people.”

Eventually the Seneca too were pushed north to Tioga Point (present day Athens in Bradford County) and finally far into the interior of New York and Canada in the course of Sullivan’s Campaign. But they continued to revere their former lands of Wyoming, which meant “great plains” to the Leni Lenape (or Delaware) Indians. The Wyoming Valley was in fact sacred for its river-rich top soils in which the most potent herbs in the area were grown by the Eastern Seneca Medicinal Society.

Reisinger continues that tradition on his own farm in lower Wyoming County and he worked tirelessly with lawmakers in Luzerne County to ensure that Native American history was an integral part of the redesigning of the river parks on the Wilkes-Barre and Kingston sides of the Susquehanna. “It’s now a walkway that tells a story from Forty Fort to Nanticoke,” he related.

Reisinger and the people of the Seneca Nation with whom he has discussed park plans see an opportunity and another venue at which they can tell their story to a new audience. “They want the park to be beautiful again,” Reisinger said of sentiment among the Senecas. “We want to support this project.” He was readily welcomed by a team that includes Eaton Township officials, the Wyoming County commissioners, and a band of volunteers dedicated to maintaining the green space for generations to come.

“I think it’s going to influence the park in the most positive way,” fellow supervisor Abe Kukuchka said of the partnership. “We will have an opportunity to learn about an almost forgotten people in a natural environment instead of a classroom.”

Linda Coolbaugh is one of the committee members who also serves as a substitute teacher in the Tunkhannock Area School District. She is excited about the educational opportunities that the park could provide with direct involvement from the Seneca people. Although Native American presence in the area far preceded that of white settlers, Coolbaugh is a direct descendant of the Marcy family that made settlements in Tunkhannock in 1772.

“There appears to be a great deal of interest in incorporating interpretive signs and education into our parks, trails, and historic sites that highlight Native American history in our region,” said Endless Mountains Heritage Region (EMHR) executive director Cain Chamberlin. In the course of the ongoing development of the Wyoming County Greenways, Trails and Open Space Plan, residents have expressed concerns that much of this history has not been told, he noted, “particularly from the perspective of native people.”

Chamberlin attended a recent park meeting and encouraged the township to participate in the EMHR’s Partnership Grant program, through which they might secure funding for ADA accessibility projects, walking trails, and interpretive signage. He was impressed by their spirit and applauded their pursuit of a partnership with the Seneca Nation. “We’re happy to see these volunteers have teamed up with Dr. Reisinger in order to integrate this incredible and pivotal piece of American heritage. We would like to help with this project in any way that we can.”

Presently, the committee is dedicated to maintaining the park as a clean and safe place for families to enjoy, which has been going well. There are temporary restroom facilities and a growing number of picnic tables. Work crews have conducted massive cleanups, including the removal of numerous dead ash trees. Swimming, fires, alcohol and pets are currently prohibited as each presents a liability that the township, which is leasing the park from the county, cannot take on. Fishing in Bowmans Creek is allowed and is monitored by the Pennsylvania Fish & Boat Commission.

It is hoped that the inclusion of events coordinated by the Seneca people will lend credence to the project and motivate more people to offer financial support. Initially, there was some pushback from residents who were concerned that public funds might be used for the park or that it might fall back into the hands of people who were disrespectful of the space and caused it’s closure.

“Now that we are taking this in a new direction, I see a difference in their thought process,” Rowker remarked.

To Patrick Quinn, an official cultural ambassador for the Iroquois Nation, said, “We owe the Seneca Nation the naming rights because it is sacred land. What’s owed is the recognition of the significance of their history,” he stated. “From there comes education. From there comes enlightenment. From there comes openness and acceptance.”

“It’s not only interesting, it will bring people to the park,” Wyoming County commissioner Tom Henry offered. “I think this is the part that is going to make it work. I think they will be wonderful at helping to get it off the ground, and the county wants to support this in any way that we can.”

While those at the helm of this modified approach look forward to having large scale events that celebrate the site’s Native American heritage, such programs and presentations are not free. Sponsors and grants will be needed to cover travel costs, hotel stays, and performances. Henry is hopeful that the involvement of the Senecas will help the committee get its own 501c3 nonprofit status, which will open the door to more funding.

In the meantime, the public is invited to get a taste of what is yet to come at a Community Day planned for Saturday, Oct. 2, from 11 am to 5 pm. Reisinger will offer a presentation on Native American and Seneca history, and Quinn will play acoustic guitar. Light refreshments will be served. Guests are encouraged to bring chairs and blankets. No pets are allowed.

A new road sign designed by Seneca Nation artist Carson Waterman, who designed the signs that mark the adjacent Seneca Trail, will be installed at the entrance prior to the event at which donations for ongoing maintenance are welcome.

For additional information, readers can follow Seneca Trail Park on Facebook, call the Eaton Township office at 570-836-3725, or send an email to eatontwp@ptd.net. 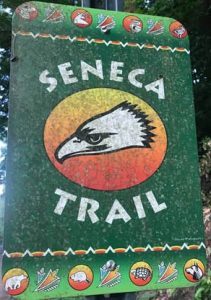 The signs marking the Seneca Trail in Eaton Township (above) were designed by Seneca Nation artist Carson Waterman and feature an eagle at the center and Native American icons across the top and bottom that represent familial groups that are part of Seneca heritage. The new entrance sign, also designed by Waterman, will incorporate the image of a lacrosse player in native regalia (below). The game was developed by Eastern Woodland tribes, including the Seneca people, and was played in the park hundreds of years ago as a friendly way to end council meetings. 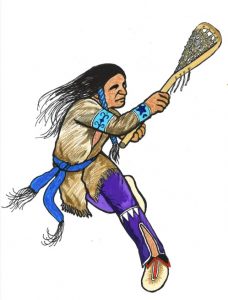 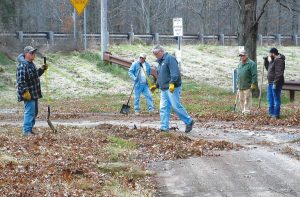 Conditions at the old Roadside Rest park had deteriorated significantly by the time volunteers gathered for the first cleanup in November 2020. 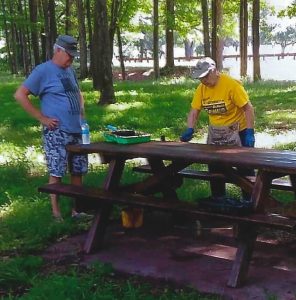 Volunteers (above) stain picnic tables that were donated to the park. 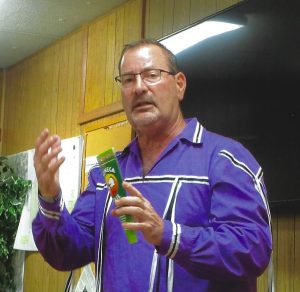 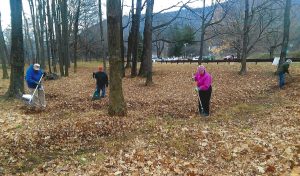 Multiple generations of local families (top) have joined forces at the park for numerous cleanup days at the newly reopened Seneca Trail Park. 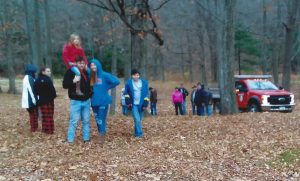 Volunteers arrive for a cleanup day at Seneca Trail Park in Eaton Township.