In: Holiday Spirit
With: 0 Comments

Patrick Sekely’s fully-charged GoPro only lasted for 56 seconds as he began to record his festive flight on a frigid morning bringing holiday cheer to the countryside. Sekely credited fellow flyer Paul Hardy for conceiving the harness to hold the reindeer to his frame. Hardy and friends also caught some of the best images when Sekely’s camera died. 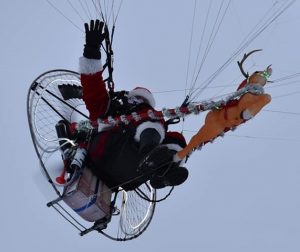 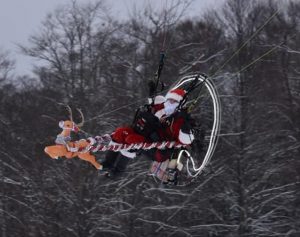 Children of all ages were no doubt delighted to see Santa Claus flying above their rural homes in eastern Wyoming County on Friday morning. The gauges on Santa’s sleigh indicated that it was 19 degrees at liftoff from Seaman’s Airport near Factoryville. He said that he didn’t mind the cold as he is always well-layered. 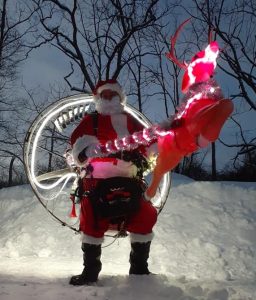 Dasher was at the lead, and both he and Santa sensed a lot of very good children in the homes below. “I always take Dasher on short flights,” Santa told EndlessMtnLifestyles.com in an exclusive interview. “He’s well-known to be the fastest reindeer.” They’re looking forward to returning on Thursday night with the rest of the team and a sleigh full of presents.