Four Gutsy Guys in Their Flying Machines Thrill the Earthbound 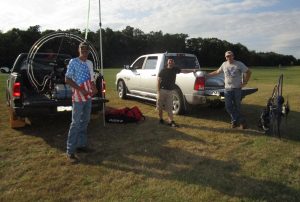 Ben Stang cruises alongside the Nicholson Viaduct (top) on a picture-perfect evening. Above, Wyoming County residents (from left) Paul Hardy, Pat Sekely, and Kurt Stang engage in some para-waiting, a term they use to describe their downtime before weather conditions are perfect for powered paragliding.

Look. Up in the Sky. It’s a bird. It’s a plane. It’s a…guy flying in a chair! Wyoming County residents have had their eyes to the skies lately looking for one or more fliers of powered para-gliders (PPG). Four local men have bonded over the ultralight machines and the freedom they experience when they are in the air.

“It’s amazing how much you can see when you get up a few thousand feet,” said Paul Hardy of Tunkhannock, citing Elk Mountain and the Nicholson Viaduct as two of his favorite landmarks. “You can get filled with emotion. It’s my church.”

Paul started paramotoring, as it is also know, a year and a half ago. He had always wanted to fly and had recently parachuted from a plane. He attributes his next inspiration to a video of Tucker Gott, an early PPG superstar of the sport, on YouTube. Soon after, Paul was working on a rooftop when a PPG came over a hilltop and his mind was made up. “I wanted to skydive again,” Paul recalled. “But when I saw that I could take off by myself and all, I said ‘I’m going to do that.’”

Paul took a 10-day course in Corpus Christi, starting by “kiting” on the beach. The class was supposed to conclude with his first flight, following an instructor’s instructions via headphones. But the weather turned sour, and Paul did not get his turn. So, he drove his glider, motor and other gear to Seaman’s Airport outside of Factoryville and taught himself to fly, finally getting aloft on his fifth attempt.

Two of the more adventurous area fliers are Pat Sekely and Ben Stang, who Sekely credits as the pioneer of PPG in Wyoming County, even though he too is relatively new to the sport. Ben, who is studying to become a commercial pilot, was so inspired by one of Gott’s videos that he switched gears half way through a vehicle renovation project and diverted his research from cars to paramotors.

“Flying an airplane is fun, but the way Tucker presented it made it so attractive,” Ben recalled. “I love the rawness and the less restrictive way that you can fly one of them. You are flying like an eagle, high above the land or low over cornfield and trees.” In 2018, Ben attended High Five Paramotoring in Wisconsin for a two-week training course.

Ben, in turn, inspired his uncle, Kurt Stang, who had already been paragliding without a motor for 13 years. Kurt had known of PPG for years, “but seeing Ben do it motivated me to try it.” Due to his previous flying experience, Kurt only needed about three days of training before he was in the air.

“Technically, anybody can buy equipment to fly,” Kurt noted. “But getting training is always recommended.”

Though the four men trained separately, they eventually bonded over their new hobby and now meet regularly to fly together. They also enjoy solo flights from their own favorite airports and farmer’s fields for which they have secured permission to take off and land. 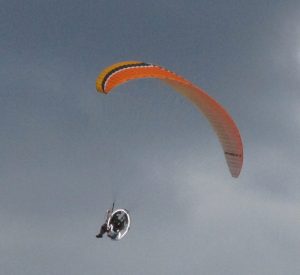 Pat (above) admittedly pushes the limits of the sport with his aerobatics, flying his PPG a mile high, and taking off as early in the morning as possible to see the sun rise. Kurt (below) has never pushed himself above 2,200 feet and loves sunsets and the view of the Susquehanna River and farm fields. Paul prefers to keep his operations simple and gets a kick out of watching birds flock underneath him. He has yet to fly under the Nicholson bridge but plans to some day. 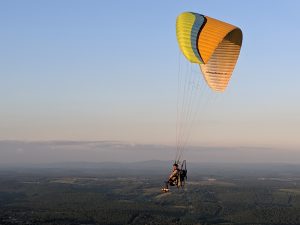 That’s not to suggest that any of them intentionally thwart safety. Though their units vary slightly in shape and size, each is equipped with a parachute that can be deployed as low as 100 feet. They routinely upgrade their equipment and do pre-flight checks of their machines before each takeoff. They look at weather forecasts days in advance of a flight and will scrub their plans if wind speeds eclipse 8 mph or storms are predicted. They fly in the mornings and evenings to avoid thermal updrafts that occur when the sun is beating straight down on the land. “If we get caught in a thermal, we could take a total collapse,” Pat acknowledged. 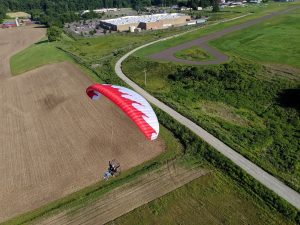 Sitting at an airport for an hour or longer to wait for perfect conditions is normal. The guys call it para-waiting. “You can go up at almost any time,” Paul (above) said of having to battle the elements, “but it’s not as fun.”

That’s why, Pat explained, that the paramoterers can’t always fulfill requests from friends for a fly-by at a certain time. Nonetheless, Pat said that one of the coolest things he’s done is an aerial “gender reveal” for the family of an expecting couple.

Sunrise and sunsets also make for beautiful photographs and videos, and the Wyoming County fliers have amassed quite a collection. The guys use their phones to snap most pictures and have been using GoPro cameras in variety of ways to record their own flights as well as their companions in the air. “Once you are up there, it’s only natural that the camera follows,” Paul remarked.

The four men feel fortunate to live and fly in a county with so much Class G, or uncontrolled, airspace – a designation determined by the general absence of aircraft and control towers at its few airports. The airspace over the mountains of northeast Pennsylvania is also referred to by some fliers as the “wind belt” for the way the prevailing weather patterns roll over the hills. “It makes for some challenges,” said Pat, comparing this area to New Jersey, which is relatively flat and a bit boring in his opinion.

With no control panel in front of them to indicate wind speed and direction or altitude, PPG flight relies heavily on the senses. “It’s all a feeling,” Paul maintains. “Once you get flying, you get a great respect for the air. We’re kind of like a butterfly up there and we can get moved around. The shape of the terrain and everything on the ground ultimately affects air flow, he added.

PPG was initially developed and embraced by Europeans and adapted by military organizations for border patrol and other functions. But it remains a largely civilian sport that is growing in popularity across America. Currently, FAA guidelines for motorized para-gliders are minimal. They still fall under a 1982 law that addresses non-motorized para-gliders and other ultra-lights. But these fliers know that their relative freedom won’t last forever as Canada is already among at least a half dozen countries to require a pilots license.

Pat feels that the best way to hold off the regulators is for those who enjoy the sport to do so responsibly and respectfully. Since he feels regulations are inevitable, though, Pat is studying to increase his personal PPD (Pilot Professional Development) rating from 1 to 3 by winter. “It’s going to happen eventually,” said Pat. “And there’s always more to learn.”

Kurt related that he doesn’t see the benefit of forming any sort of club to attract more paramotorists, and Pat agrees that he isn’t anxious to see the sport grow locally. But Ben feels that PPGs could revolutionize recreation in the region. Other than hiking and kayak, he maintained, there are not a lot of other hobbies to take up in northeast Pennsylvania that are affordable for families.

“I think that it would be very beneficial to people in the area,” Ben stated, adding that he would love to open up a school just to provide lessons and more options for affordable, recreational flying. “There’s no better way to enjoy the majesty of northeast Pennsylvania than being up there in the air. You’re literally sitting in a lawn chair enjoying the sky.”

Additional photos by the author and the fliers: 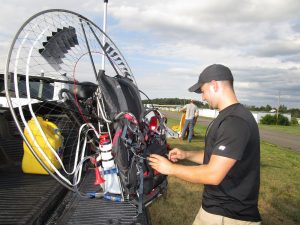 Pat Sekely thoroughly looks over his flying machine prior to taking off from Seaman’s Airport near Factoryville. 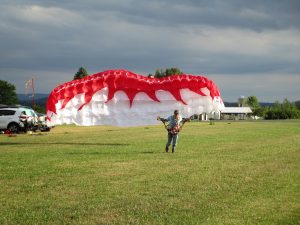 Paul Hardy performs a forward launch to set the wings of his paraglider for takeoff. 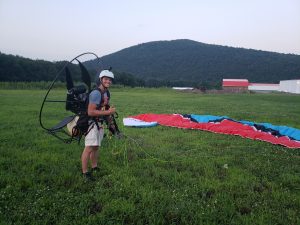 Ben Stang is all smiles after a successful flight from Skyhaven Airport in Eaton Township. 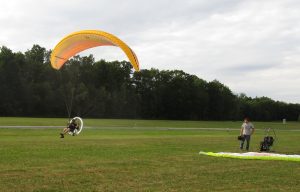 Pat Sekely comes in for a landing at Seaman’s airport, watched by fellow flier Kurt Stang. 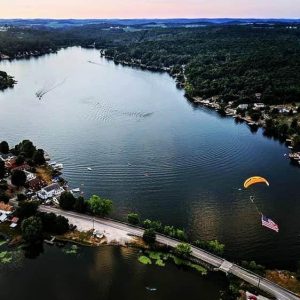 Ben Stang is the high flyer taking a photo of his uncle Kurt below, floating a flag over Lake Carey. 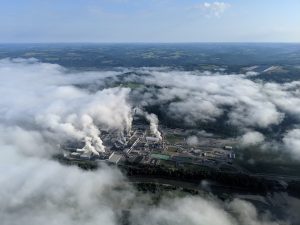 Steam rising from the Procter & Gamble plant at Mehoopany mingles with morning clouds in this photo taken by Ben Stang.