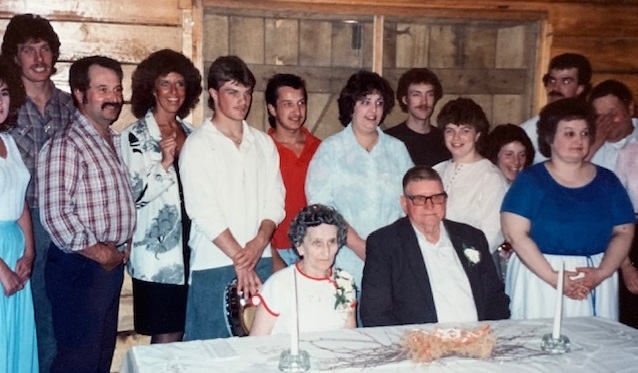 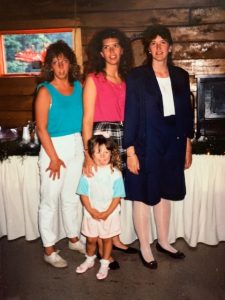 The extended Epler family (top) gathers at the Mountainhouse to celebrate the 50th anniversary of Harry and Mary Epler in 1987. Larry Epler’s step-daughters (above, from left) Suzette, Annette and Babette Bender, shown here with Larry’s granddaughter Stephanie Lane, were an integral part of the family business.

While construction was underway on Your Mountain House, a new concert venue and steak house just outside New Albany, local residents and many who had grown up in the area took to social media to share their memories of the establishments that preceded the new business on or near the same spot. Watering holes there date back to at least the 1960s, when Max Campbell ran Shepherd’s Inn out of his house. Patrons remember the bar as being relatively small with only a half dozen bar stools.

“Max was there when I first came to the area in 1969 or ’70,” Roger Hoyt recalls. Ed Howell was another bartender he remembered there. “They were nice people.”

According to local historian Todd Manahan, Shepherd’s Inn burned down in 1977, and Max sold the liquor license to Torre Lorson, who built Torre’s Tavern just to the left of where the original Mountainhouse would later be built. The bar was purchased around 1979 by Gerry “Chiz” Worral and became Chiz’s Oasis. It was destroyed by fire in 1983. 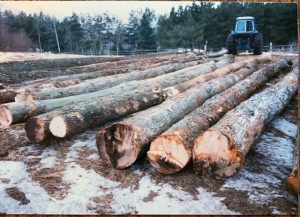 Larry Epler and his family purchased the property and license and constructed the original Mountainhouse, which became an immediate icon due in part to its broad floor plan and raw-hewn look, including trusses cut from local lumber that Epler designed after crawling into the attic of a Catholic church to figure out how such high, open ceilings were engineered.

Epler credits the name of the Mountainhouse to Doris Hugo, whom he asked for suggestions. For many years, there was one large house with a wrap-around porch near the peak of Hatch Hill that everyone called “the mountain house,” and Epler thought that naming his establishment after it would be a fitting tribute.

Perhaps the Epler Era still evokes the most memories on social media because of the average age of its users. But Epler also remembers the late ’80s and ’90s as a good time to be in the bar business. 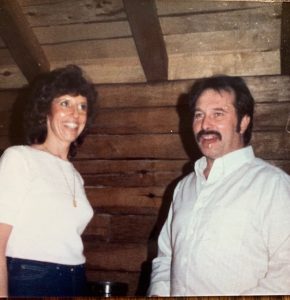 “I loved talking to the people. You knew everything that was going on,” said Epler, whose then wife Judy served as the hostess, while her daughters Suzette, Annette and Babette took turns as servers. Larry’s sister-in-law Judy baked desserts. Lisa Kellogg and Sally Robinson were among local residents who worked behind the bar then. “You didn’t have to get the newspaper,” Epler continued. “That’s how you knew what was for sale and everything about the country.”

“The only name I have known it by is the Mountainhouse. I went there for dinner sometimes,” Harriet Shenk noted on Facebook. She grew up just down the hill on Bendt Hill Road.

Crowds flocked to the Mountainhouse on Friday nights to hear some live rock’n’roll or on Saturday nights for country acts. “Nobody that made history,” Epler remarked. “Just good local bands that had a good following.”

Food was served family style, and the menu was decidedly limited. “If I was coming back home to eat at my parents house, I ate what was on he table, so that’s how we worked there,” Epler related. Fish was generally served on Fridays and roast beef on Saturdays.

“If you didn’t like roast beef, you better not come,” he recalled with a chuckle. “For a table of four, we’d send out a platter of beef, a bowl of mashed pots and gravy and a vegetable and roll.”

“If you didn’t make a reservation on Friday, Saturday or Sunday, you didn’t get in. The food was that good,” recalled Babette, noting that the Mountainhouse always seemed busy and she made good money on tips at that time for a teenager.

On Sunday morning’s, Epler’s former daughter-in-law Gina Allen Epler came in to give the place a good cleaning to prepare it for those leaving church and stopping in for chicken and biscuits or turkey.

“No story about the Mountainhouse would be complete without mention of Barb and Dick Powers who worked the door collecting the cover charge on band nights for years,” Suzette maintains. “They worked countless Saturday nights, and their son Rich tended bar there.”

When Epler built the Mountainhouse, his intention was to run it for eight years and sell it at its peak in popularity. “But when everything was going so well, I kept it,” he stated. After another five years, Barry Young approached him, and Epler financed his takeover of the business.

Another dozen years passed before George and Sandy Kramer bought the Mountainhouse. The bar and restaurant was closed for two years after the Kramers retired in 2013 then reopened again in 2015 for a few years again by Tracy and Becky Gowin. 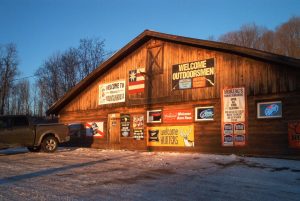 Despite some cosmetic changes under different owners and managers since the ’90s, the Mountainhouse basically retained its rustic charm and continued to appeal to its regular customers, many of whom remember a mural painted on the wall in 1984 by local teacher and folk artist Bonnie Bell. Your Mountain House owner Dave Nolt said that photos were taken of Bonnie’s mural that will somehow be incorporated into the final design of Your Mountain House, as will other relics like the tractor seat bar stools, which will become lights, and much of the original wood. (See story here: http://www.endlessmtnlifestyles.com/major-concert-venue-restaurant-and-rental-hall-opening-soon/) Epler said that he wishes Nolt and his business partners the very best.

“The Mountainhouse was obviously a memorable time for our family, but its legacy started well before us, and hopefully Dave can build something that long outlasts our stint on that ground,” said Suzette. “And it sounds like it will be spectacular.” 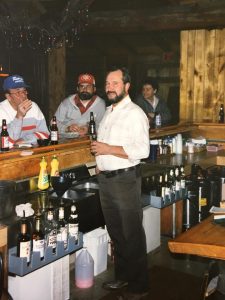 Mountainhouse founder Larry Epler holds court behind the bar in the 1980s. 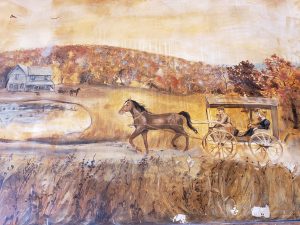 Photos were taken of the panoramic mural (above) painted by Bonnie Bell on an interior wall of the original Mountainhouse before the building was recently dismantled for new construction. 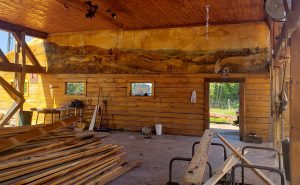