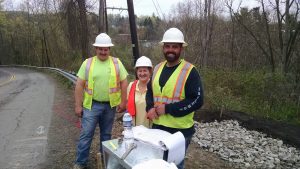 A collaboration of three entities and many individual volunteers has resulted in a system of trails and wildlife areas that sets Factoryville in Wyoming County apart from many municipalities. The Campus Woodlands Trails and the Howard Jennings Nature Preserve straddle the border between Lackawanna and Wyoming counties and have become an amenity that most borough residents would not want to be without.

“They are used in great numbers,” Factoryville borough manager Maryellen Buckbee said of the walkways, which vary greatly from the somewhat rustic Water Discovery Trail to the Countryside Conservancy Trolley Trail that utilized a former trolley line that ran from Scranton to Lake Winola.

The Keystone phase of the Trolley Trail, which extended it into Factoryville was completed in 2017. The initial stretch of improved Trolley Trail that connects Dalton with Clarks Summit was opened in 2014. “The piece that we have in town is very nice, but sometimes people want a longer walk,” Buckbee related, “and they can walk into Lackawanna County.”

The Countryside Conservancy has worked with Keystone College to complete the trail, which strategically connects a cluster of small Conservancy nature preserves in both counties. The third and final phase is currently underway. According to Countryside Conservancy executive director Bill Kern, the municipality has been an eager partner every step of the way. “We have a great working relationship with Factoryville,” he stated.

“Everybody is interested in the same end result, so we work well together,” said Buckbee, who credits borough maintenance supervisor Jim Gesek for addressing day-to-day issues on the trails like fallen trees and litter. “We get a lot of positive feedback from the community, especially now that there are fewer places to go.”

The college community also places a high value on the trail system, which is in a state of transition after a number of retirements and other staff changes in recent years. It now falls under the direction of the school’s Environmental Education Institute. The nature preserve as a whole is dedicated to Keystone College professor emeritus Howard Jennings who was revered for his lifetime dedication to environmental education and stewardship.

“As a full-time instructor, Professor Jennings was into getting the students outside and having hands-on experiences,” Valerie Titus, Keystone College assistant professor and program director of Wildlife and Environmental Biology, explained. “He was responsible for getting the funding to get the trails up and running.”

Titus credits Sharon Burke of the Overlook Foundation for assisting with coordination after Jenning’s retirement, retired professor Jerry Skinner for further fostering student involvement in the trails, and recently resigned grants administrator Liz Ratchford for keeping it going during the transition. Like-minded organizations, such as the Endless Mountains Heritage Region have supported the project by providing grant money for signage.

The trails and preserve offer unlimited educational opportunities, Titus maintained. With the uncertainty of exactly how the school would reopen in the fall because of the ongoing COVID-19 pandemic, She remained hopeful that students would soon again be back at school and that she would be taking them outdoors.

“As long as we are on-site, we’re going to set up some long-term research sites to start looking at,” Titus explained. Among the assignments she has planned for her students this year is to study the impact of exurban development on the environment.

“Small patches of nature preserves are becoming refuges for wildlife, and they are going to be critical for wildlife as urban areas expand,” Titus offered. There is also a proposal to establish Keystone College as an arboretum. “That’s a certification that shows that we take our trees seriously. We’ve got quite a lot of diversity among our trees, despite environmental issues like woolly adelgids on hemlocks and the emerald ash borer.”

The latter has left obvious holes in the surrounding woods which can be both a blessing and a curse for biologists. “It can draw other species in – plant and animal – to rejuvenate,” Titus related, “and we can take advantage of seeing how they rejuvenate.”

According to Kern, the Conservancy continues to maintain a presence at the college by collaborating on projects, like the planting by students of more native plants that are bird-friendly and a pollinator garden to attract greater varieties of birds and butterflies.

Senior biology students Natalie Wasilchak and Devin Welch enjoy taking walks on the trails during breaks between classes and consider the diversity of the preserve crucial to their learning experience.

“We cover pretty much all the bases here on campus,” Welch (below, left) stated. “It’s important to get students out here to see this kind of stuff.” 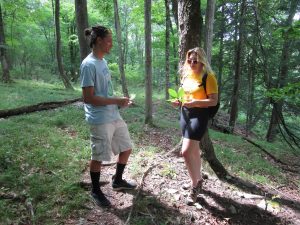 “For people who haven’t grown up here, it’s a great way for them to experience more of what their job will be like,” Wasilchak (above, right) added.

Titus is encouraged by the increase in community involvement, especially from the residents of Factoryville. “It puts more sets of eyes on the trail,” she noted. “We hear more from the general public if something is wrong, and we want to increase that kind of communication.”

“It’s pleasure to be involved with it,” Buckbee maintained. “I live in Clarks Summit, but I like the trails here better.”

(Editor’s note: This article was written and submitted prior to the start of the new school year.) 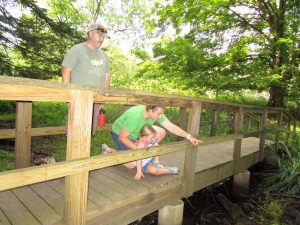 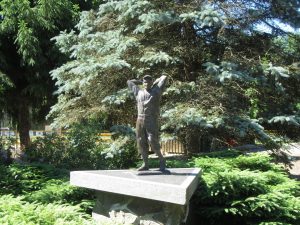 The trail system in Factoryville also wraps through Christy Mathewson Park at the west end of town. 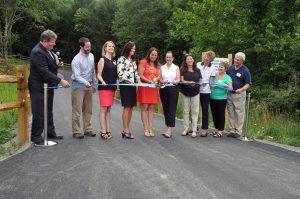 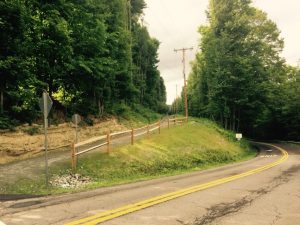 Riverside Drive in Factoryville parallels the border of Lackawanna and Wyoming counties and dissects the Countryside Conservancy Trolley Trail where it leaves Keystone College and runs into the borough.