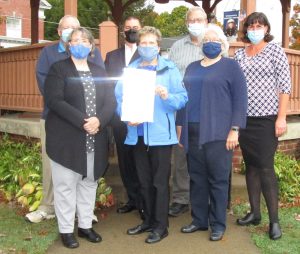 Much of Tuesday’s regular meeting of the Wyoming County Commissioners was focused on ongoing business and a few initiatives that are in the process of being wrapped up, but there were two agenda items in particular of which the commissioners want the public to be aware.

A public meeting will be held at The Gathering Place, behind Ace Robbins, off Sunnyside Road in Tunkhannock to discuss possible uses for the Roadside Rest in Eaton Township. Nonprofit organizations, public officials and other individuals with ideas are encouraged to attend.

“We certainly want to do something for public use there,” said commissioner chair Rick Wilbur. Though no decisions will be made that day, he noted, “Lots of people have ideas, so let’s sit down and talk about it.”

The once popular family park along Rt. 29 had to be closed last year after numerous instances of drug use and extreme littering. It has been reopened conditionally for fishing with help from the PA Fish & Game Commission, but picnic tables and restrooms have not been accessible.

The meeting will be held in an open-air pavilion starting at 3 pm on Saturday, Oct. 17, and attendees are asked to observe COVID-related CDC guidelines.

The commissioners reached out to educators and fifth-grade students two weeks ago with plans to award three $100 prizes per district for posters promoting drug-free lifestyles. The money comes from a nearly forgotten Drug School Grant received by the county some years ago that has been sitting in an account.

The contest will run through the end of the month and is open to students in the Tunkhannock Area School District, as well as the five school districts that straddle county lines: Wyalusing, Elk Lake, Lackawanna Trail, Wyoming Area, and Lake Lehman.

Fifth graders are the focus of the contest, Wilbur noted at a previous meeting, because statistics show that recreational drug use too often begins at that age level. To date, there have been no entries. Copies of posters can be submitted by mail to 1 Courthouse Square, Tunkhannock, PA 18657 or dropped off in person at the main entrance. Commissioner Ernie King is coordinating the contest and can be reached at 570-996-2229 with any questions.

As the Oct. 13 meeting wrapped up, members of the Tunkhannock Business and Professional Women’s Foundation (TBPWF) stopped by for the reading of a proclamation by commissioner Tom Henry Acknowledging Oct. 18 to 24 as National Professional Women’s Week in Wyoming County. During a year that has been everything but normal for all businesses, TBPWF president Julianne Miller spoke of another role of the group’s members as peace makers. They are focused on peace at home in an era of increased domestic challenges, peace in the community in the face of substance use disorders and racial tension, and the nation as citizens participate in the upcoming General Election.

State Rep. Karen Boback, who was participating in the meeting virtually, told those in attendance that she will deliver a resolution on behalf of the TBPWF to the House floor.

Henry mentioned earlier in the meeting that he had participated in a workshop coordinated by the Luzerne-Wyoming Counties Mental Health and Development Services. Topics covered included substance use disorders and an alarming suicide rate of 42 individuals over the past 10 months, largely attributed to depression caused by the pandemic. While Wyoming County’s share of that total may only be a couple of individuals, “That’s a couple too many,” said Henry, who will be meeting with the county’s district attorney to determine what resources are available to address the situation.