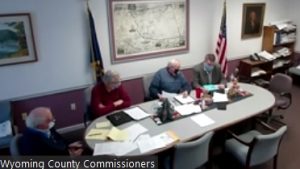 Wyoming County Human Resources director Mike Donahue was excited to announce at this morning’s commissioners meeting that a budget and program description have been finalized for a “warm hand-off” program to help those with substance use disorders. The initiative has been many years in the making, Donahue related, and he is excited about the positive impact it may have on reducing drug overdoses in the county.

In Pennsylvania, the warm hand-off initiative has been gathering steam since 2016 as a way to ensure the seamless transition of an overdose survivor from emergency medical care to specialty substance use disorder treatment (SUD) without intervention by law enforcement. A certified recovery specialist (CRS) and a clinician by the county will be contracted with stipends of $100 and $250 per week, respectively.

“Instead of having to wait for someone from Luzerne County to come up, we will have that person available,” Donahue said of a previous joint arrangement that did little to assist Wyoming County residents. The service will be available to all county residents, including inmates and those who present themselves to the Emergency Department at Tyler Memorial Hospital in Tunkhannock.

Donahue credited the board of the Wyoming County HOPE Coalition, the district attorney, the probation department and president judge Russell Shurtleff for expediting the process after Donahue was informed on Dec. 8 that the county was poised to operate the program independently.

“First we were told that we didn’t need it,” Donahue remarked. “And now we have it.” The program will go into effect on Jan. 1, 2021. The $20,000 budget for the program will come from a Human Services Block Grant that was applied for in 2017. “That money is flexible. So, if we see a need in the county, we can address it.”

Donahue noted in an interview after the meeting that the news was even better than he had hoped, having initially applied just for enough money to cover the costs for the CRS. The benefit of this proposal, he explained, is that, if the CRS senses that an individual might have a dual diagnoses, he or she can call on the clinician for appropriate placement of the individual in a facility that can address multiple issues. “It’s really nice to have that level of expertise available to the CRS,” Donahue stated.

The commissioners are beginning talks with telecommunication company T-Mobile, which acquired Sprint in April 2020, to share cell towers. Commissioner chair Rick Wilbur credited fellow commissioner Ernie King with bringing the idea to the table after King learned of a similar pilot program in Sayre, Bradford County.

King’s initial interest was in finding ways to expand broadband coverage into rural, under-served pockets of the county for farmers and other ag producers. “Broadband is very important to their operations,” King stated. A unified network would not only help to fill gaps in cell phone service, but broadband internet can be spread through it.

“They also have a program where they offer all first responders and other medical personnel free cell service with limited data and extensive data for ten dollars,” Wilbur noted prior to the meeting. Though he was unsure of the details of that plan, he suggested that it might attract some new people to volunteer with their local fire companies and EMS. “It sounds like a win-win if we can pull it off.”

Budget to be Approved Dec. 31

An annual budget set at $16,024,720 garnered preliminary approval by the commissioners and will be officially adopted at their Thursday, Dec. 31 work session. The amount is $10,000 higher than the proposed budget put out for public inspection on Dec. 11, but it is still balanced.

“It sure feels good when we have a balanced budget,” said commissioner Tom Henry. “There’s a lot less stress.”

In related news, the commissioners unanimously selected Peoples Neighborhood Bank to carry a note for the county to cover expenses until tax revenue catches up with spending. At .96%, the bid by Peoples was just more than half the 1.75% offered by M&T Bank.

The promotions of two long-time courthouse employees were approved on Dec. 22. Sharon Kuback will become the new first deputy prothonotary, and Judy Murach will become the first deputy recorder of deeds, both on Jan. 1. Both positions have been vacant since last January. The move in the prothonotary office leaves an opening there, but there will be no new third deputy recorder of deeds hired.

Another county vacancy will be filled by a retiring Pennsylvania State Police officer. Jaime Lopez will become deputy sheriff to fill a position open since August. Lopez will start on Monday, Dec. 28, the same day that he retires from the Tunkhannock PSP barracks.

In other business, the commissioners approved raises for poll workers in the wake of a challenging election year when it was often hard to find help. Election judges will receive $40, election inspectors $30 and all other poll workers will get $20. Wilbur conceded that the amounts, which will add $1,800 to the Elections Department budget, still don’t reflect the importance of the jobs.

Inmate Outsourcing on the Rise Again

The commissioners’ schedule included a meeting of the Wyoming County Prison Board, but warden Ken Repsher had Dec. 29 on his calendar. Via phone, he reported that there are currently 50 prisoners in the system, including 42 men and 8 women. Five inmates are boarded out to facilities in Wayne and Susquehanna counties, and two are currently in drug and alcohol rehabilitation centers.

A report released by Repsher subsequent to the meeting indicates a dramatic rise in outsourcing Prison population reached a six-year low in July through a combination of supervised bail for non-violent offenders near the end of their sentences to aid in safe distancing at the Wyoming County Correctional Facility due to the pandemic and a dramatic slowdown in the court system because of the pandemic.

After dropping from monthly averages over $2,000 to just $660 for outsourcing in July, the cost to the county for keeping inmates outside the county skyrocketed to $24,310 in October, the last month in 2020 for which figures were reported.

The good news, according to Repsher, is that the prison remains COVID-free.

The courthouse in Tunkhannock will be closed on Dec. 24 and 25 and Jan. 1 in observance of Christmas and New Year’s Day.

The Dec. 31 work session will be live-streamed via Zoom. The public can participate via the meeting link posted at www.wycopa.org.