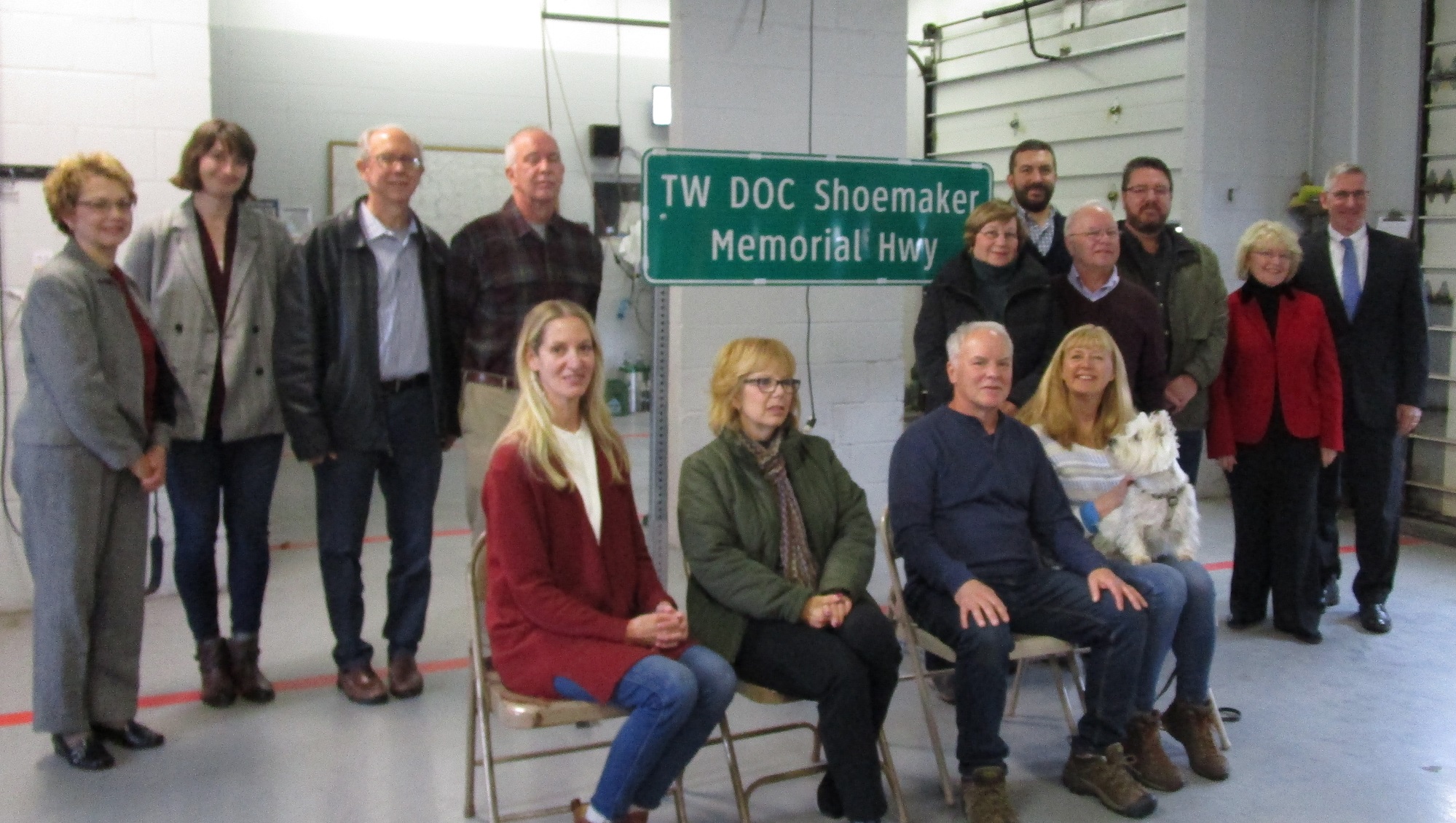 Celebrating the unveiling of one of the signs that will mark the length of Route 220 dedicated to Thomas ‘Doc” Shoemaker on Friday were (seated, from left) Chris Shoemaker; Sarah Jensen; Mike and Debby Shoemaker; (standing) Sandy Tosca; Katie, Steve, John, Jan, Tom, and John Andrew Shoemaker; Rich Jensen; Tina Pickett; and Russell Redding.

Among the numerous heartfelt and humorous memories shared by loved ones and friends of Thomas ‘Doc’ Shoemaker on Friday, a common thread was that the former Dushore resident was always “on the road.” Therefore, there could be no more fitting tribute, they agreed, than to name a stretch of highway in Sullivan County in his honor. Route 220 from its intersection with Route 87 in Dushore to the Bradford County line will henceforth be known as Thomas ‘Doc’ Shoemaker Highway.

Doc was many things to many people, making it nearly impossible to define him. In his 66 years in Sullivan County, he cared for farm animals and house pets as a veterinarian, published and edited the county’s premier newspaper and later a tourism guide, taught courses on biology and history, and helped to coordinate the construction of Sullivan Terrace as a county commissioner. All of this after a distinguished military career during which he worked on the Manhattan Project. 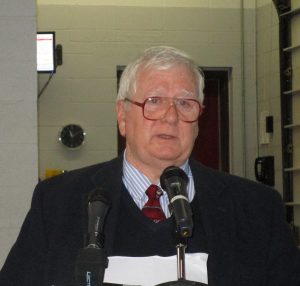 “He was a true renaissance man,” said Dushore Borough Council member Dean Homer (above) in his opening remarks. Joining Homer at the podium were Rep. Tina Pickett; PennDOT District 3 executive director Sandy Tosca; Pennsylvania secretary of agriculture Russell Redding; Doc’s oldest son, Tom Shoemaker; and Marti Denmon, Doc’s faithful veterinary assistant and driver up to the time of his death in May of 2018.

In addition to his love of family and community, Doc shared a greater vision of regionalism as one of the founders of the Endless Mountains Tourism Association, to which Pickett also belonged. From its beginning in the mid 1960s, selling the Endless Mountains was no easy task, Pickett (below) related. 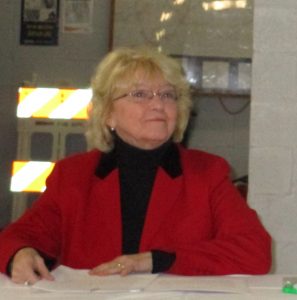 “Doc had an advantage because he had the newspaper, and he used his resources to promote the area,” Pickett said, in reference to the Sullivan Review. Having already cataloged the natural and historic assets of Sullivan County, he set out to publish the region’s first tourism guide. “He understood the importance of tourism growth. As time went on, more people knew that the Endless Mountains were a place to go,” said Pickett. 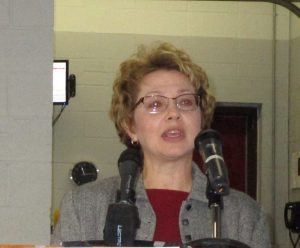 Tosca remembered Doc as a humble man, with whom she liked to visit each spring to go over PennDOT’s construction plans for the coming year. “He took a keen interest in what we were doing. He always had plenty of questions,” Tosca (above) stated, admitting that she was otherwise largely unaware of Doc’s many accomplishments until his death. “He never talked about himself when we met,” Tosca remarked. “It was fortunate for Sullivan County that he moved here.”

Redding spoke to Doc’s legacy as a champion of rural agriculture that preceded Redding’s own association with the Department of Agriculture, of which he has now twice been the director. Doc, he suggested, must of have been one of the most endearing mentors of his time. “To be with him and work with him was incredible,” said Redding, crediting Doc for bridging the sciences and the civics. “He found that perfect balance between his veterinary practice and publishing. He was in the ‘relationship business.’” 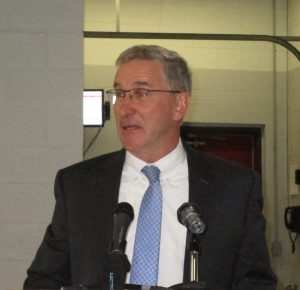 In more than 50 years as a veterinarian, Redding (above) noted, Doc had ridden out the complexities of a science that was constantly changing, from his years as a farm and home inspector trying to stem the tide of bovine tuberculosis spreading to humans to an evolution in man’s relationships with his companion animals.

The latter was echoed in a story shared by Denmon, who drove Doc nearly everywhere, including to the homes of residents whose dogs and cats were near the ends of their lives. He preferred euthanizing animals at their homes, Denmon explained, “because he felt that is what they deserved.” The ride back to Dushore would be sad and quiet, she recalled. 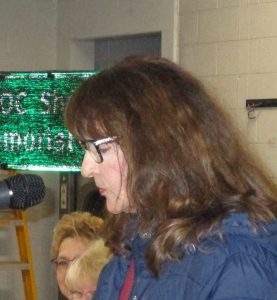 The bulk of Denmon’s tribute to Doc had the nearly 100 people in attendance crying from laughter. From her recanting the orders that he would issue in the course of most work days, she painted the picture of a determined soul who wanted to get everything right every day, whether that be satisfying the needs of a client or snapping the many photos that would be blown up on the front page of the newspaper.

Doc’s son Tom thanked all those who had made the event possible, including Pickett and Tosca for enabling the legislation to name the road after his father. The lesson that Tom had garnered from both Doc and Doc’s wife Stevie (Stefana) was to always give back to the community in which you live. His father would also find the tribute fitting, Tom noted, because though Doc enjoyed traveling around the world, “he loved to come back to Dushore.” 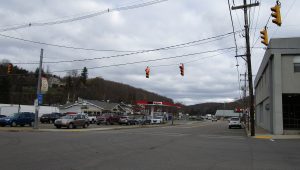