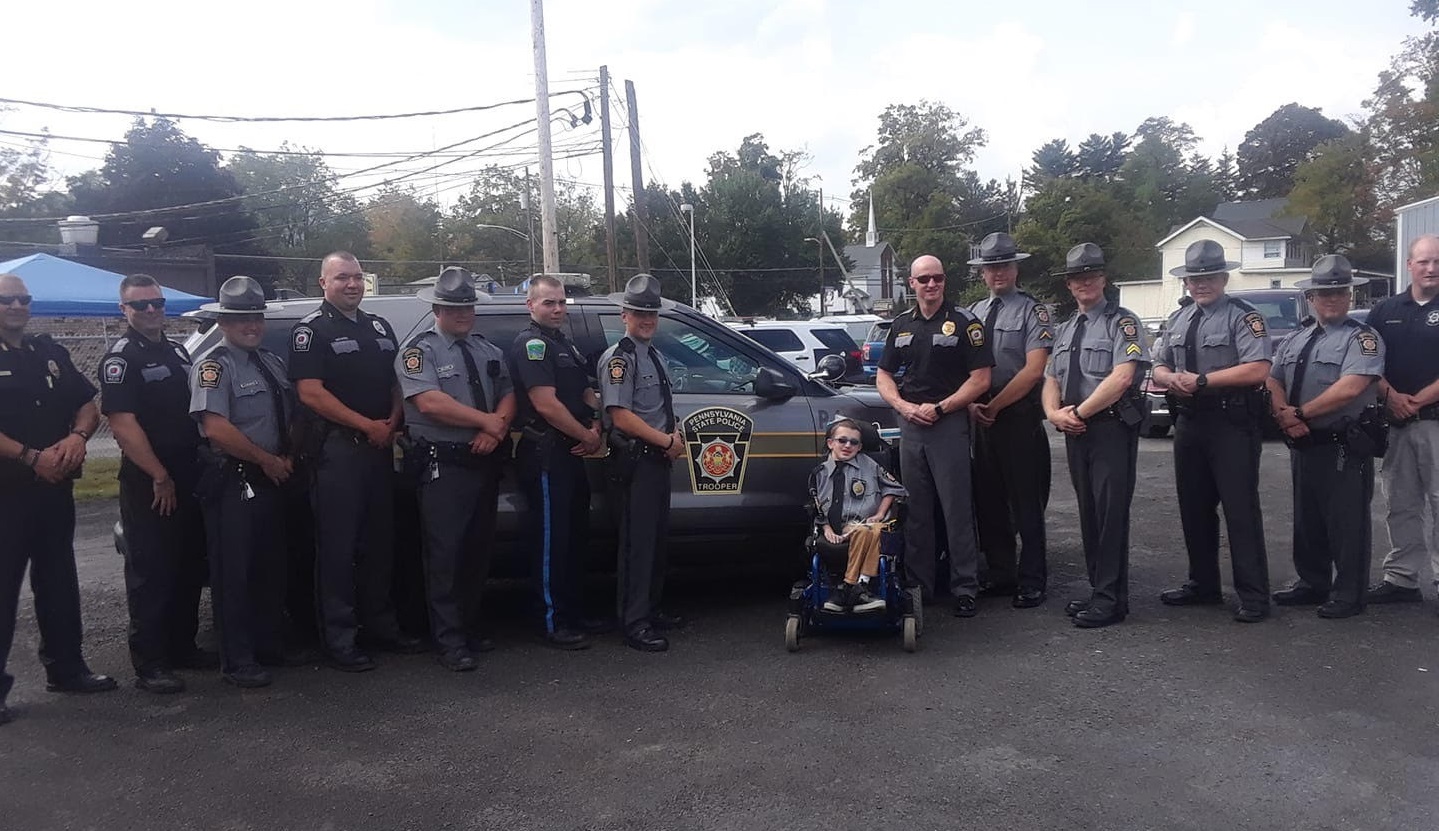 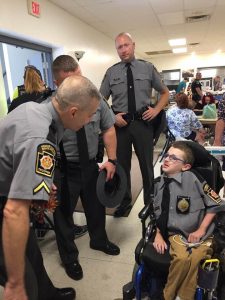 Police officers from at least five counties participated in the ‘Cops Cook for Trooper Josh’ fundraiser held in Wyoming County on Sunday, greeting the honorary Junior Trooper as he arrived at the Triton Hose Company. Trooper Jaime Lopez of the Tunkhannock State Police Barracks was one of many officers to talk with Josh Bourassa at his party on Sept. 22.

State and local police from around the region gathered on Sunday to honor Joshua Bourassa of New Milford, whom they had given the title of Honorary Junior Trooper earlier this year. “Cops Cook for Trooper Josh” was held at the Triton Hose Company in Tunkhannock and provided an opportunity for the public and the officers to show their support for a teen with a big smile and a fighting spirit.

Josh was born with Krabbe’s leukodystrophy, an enzyme deficiency that prevents the breakdown of certain elements needed for proper function of the nervous system. Though the condition has rendered Josh to a wheelchair and subjected him to numerous surgeries, it didn’t prevent him from shaking a lot of hands and giving high-fives to his “fellow” officers at Sunday’s event.

The police officers met Josh outside the fire hall when he arrived, forming two columns through which he passed. Inside, he found an enthusiastic crowd that welcomed him to his party. Josh has always been a big fan of the state police, and the troopers from the Gibson Barracks in Susquehanna County and beyond have become equally big fans of his.

“He is so pro law enforcement. That’s his passion in life,” Cpl. Jeff Burman of Troop R remarked. “We don’t get a lot of positive contact with people, and he inspires us.”

“We are so thankful for all of the love and support from the officers and the community,” said Josh’s mom, Rebecca Bourassa, who noted that Josh has always wanted to be a police officer. “We are blown away.”

According to Rebecca, more than six thousand dollars was raised on Sept. 22 through the sale of tickets and T-shirts, raffle baskets, and games. Josh challenged guests to games of ball and joined troopers who were stationed along Tioga Street accepting donations from passing motorists.

“Josh had an amazing time,” said Rebecca. “And all the cops worked really hard.” Many off-duty officers and staff members from police departments also attended the event.

In addition to assisting with the medical bills, Rebecca related that events like this go a long way to boosting her son’s confidence and helping him fight the malady. In February, troopers visited Josh at his home to give him a badge and certificate. In June, they collaborated with the State Police at Pittsburgh to provide Josh with an official escort back to New Milford after an extended stay at the hospital.

“For his birthday, Josh asked that people send cards to their local police,” Burman recalled. “He does far more for us than we could do for him.”

The event was also geared to bringing awareness to Krabbe’s leukodystrophy, which is generally incurable. But Josh has shown an incredible determination for beating the odds. When he was at the hospital in June, his vital signs were extremely low, and his parents weren’t sure that he would be going home.

“He’s fueled by his connection with people,” said Burman, who made a call to the Pittsburgh Police department and asked if some of the officers there might pay him a visit. The response was overwhelming, Burman noted, and Josh’s condition improved dramatically. It was the Pittsburgh Police who arranged for his escort out of the city, after making him an honorary member of their department as well.

“It renews your faith in humanity,” Burman said of the growing relationship between Josh and the police community. “To have someone facing so much adversity so supportive of us is incredible.”