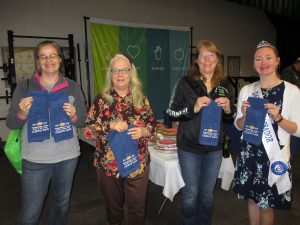 Members of Susquehanna County Dairy Promotion (top) wait for their turn to model pies as Billy Lopatofsky of Lopy Auctions starts the bidding war at Farm and Home Day. Representing the winners of the annual pie contest, some of whom were unable to attend or had other obligations, were (above, from left) Allison Quick, Bonnie Miller, Brenda Voll, and Holly Harvatine.

While Susquehanna County 4-H and Dairy Promotion members played games with and conducted hands-on activities with family members at Farm and Home Day on April 18, tables on the stage behind them slowly filled with pies. Ranging from standards like apple, strawberry rhubarb and peach to creative offerings like Alex Empet’s double-layer pumpkin pie, Maria Klim’s cinnamon roll apple pie and a number of gluten-free entries by the Harvatine family.

The pie contest, long a staple of Farm and Home Day since it was called Dairy Day and Ag Day, provides not only an opportunity for youths and other family members to work together in the kitchen. Proceeds from the pie auction that concludes the day are divided evenly between the Dairy Promotion program and 4-H activities.

Then the bidding began with Amanda Voll’s pie fetching $360 from Vicki Clark. Prices for most of the youth entries eclipsed $200, with most bring between $300 and $400. Bill Goff purchased Allison Quick’s pie for $400, and adult pie prices averaged about $200.

But the big prize went to Charlotte Quick, whose peach pie finally ended at $750 on a bid from PA governor candidate Dave White, which most in attendance believed is a new record. White was bidding against Rep. Jonathan Fritz, who went on to purchase three pies totaling $1,000 from Luke Harvatine, Maci Harvatine and adult contender Sandra Marvin.

In the end, more than $10.000 was raised for the youth groups, which is also considered a new high total. “It was a great auction year,” said Susquehanna County 4-H educator SarahRae Sisson, who was experiencing only her second such event. The bids soaring in the stratosphere took everybody off guard. “That was absolutely amazing to see that happen.” 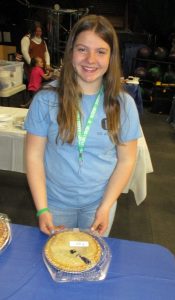 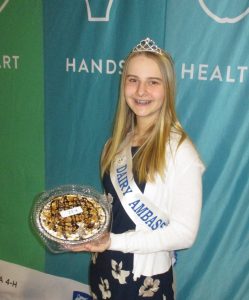