Sen. Toomey Energized by Round Table on Marcellus Shale 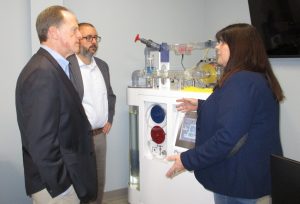 U.S. Sen. Pat Toomey made a trip to northeast Pennsylvania on April 12, touring the Lackawanna College School of Petroleum and Natural Gas in Tunkhannock and taking part in a round table discussion. In the wake of the federal government’s pledge to boost exportation of natural gas to European allies, Toomey said that he was there to hear first-hand the obstacles faced by producers in meeting that challenge and others.

Bill desRosiers of Coterra Energy offered welcoming remarks and credited the Senator for taking a larger role in voicing his support for the industry. Toomey acknowledged the importance of the natural gas industry to Pennsylvania not only in terms of direct and indirect jobs, but also in the lowering of CO2 emissions. He heard repeatedly that companies in the area could double production if the infrastructure existed to move it to market.

“It makes your head explode to know that you are sitting on one of the largest natural gas deposits in the world,” Toomey remarked, calling the current federal government “hostile” to fossil fuel production. “We always knew that it was a good idea to have our allies consuming American natural gas rather than relying on Russia.”

On the topic of getting natural gas to New England, which has also been relying on the import of Russian gas in recent years, panelists pointed to New York state as one of the biggest impediments to energy security. The senator asked, “If New York were not an obstacle, would you be able to work your way through the federal regulations?” The answer was a resounding “Yes.”

Toomey said that he’d like to see a federal regulation that would prevent a single state from standing in the way of national interests. “That’s how the constitution is set up,” he remarked.

“We need to get the policy right so that we can get the pipes in the ground and get the gas to America and our allies,” said Jim Welty, vice president of government affairs for the Marcellus Shale Coalition.

One consensus reached during the discussion is that the successes of industries in Pennsylvania at reducing emissions and repurposing the captured hydrogen, methane, and carbon has been largely ignored by those supporting a rapid transition to alternative energy sources.

“There’s a reason that the United States is leading the world in emissions reduction,” Welty stated, “And it’s because of the people sitting here at this table.”

“We’re looking at any way we can to reduce emissions at our facilities to zero by 2050,” Mike Atchie of Williams Companies offered as an example.

Rebecca Peterson of Folsom Engineering noted that she has seen a big shift in popular opinion since 2018, as the clean energy movement gained momentum. She said that she has experienced difficulty getting insurance, loans, and even new employees due to the stigma.

Dismissing the benefits of natural gas production, even as a bridge to a future with more reliance on renewable energies, can also hinder those endeavors, Dan Ertel of Eureka Resources suggested. The facility in Standing Stone Township, Bradford County, recovers wastewater from drilling operations, isolating recyclable minerals for other uses and returning fresh water back to nature.

Among those valuable byproducts is lithium, which will be needed in large quantities to build electric car batteries and solar panels. Most lithium is produced in Australia, Chile, China and Argentina. Eureka is expanding to extract and produce as much as 800 metric tons of lithium for car batteries within 15 months.

When Eureka approached financial institutions to help finance the $30 million expansion, Ertel said, “They ran away. They view us as natural gas related. We need something at the federal level to change that.”

Infrastructure, permitting issues, and stigma aside, a challenge faced by almost everyone in attendance is a shortage of qualified workers to fill positions. Chad Gorman, operations manager at GasSearch Drilling Services, and Matt Austin, president and CEO of Holcombe Energy Resource and several other companies, reported that each company consistently has 40 or more job openings.

Lackawanna College School of Petroleum and Natural Gas program director Sue Gumble told Toomey during his tour of the center that, even when enrollment returns to pre-pandemic levels, the school could not supply enough workers to meet local demands. On that note, Toomey told the audience that they were not alone. There is a shortage of workers throughout Pennsylvania and across the nation, he remarked.

After leaving Tunkhannock, Toomey took to Twitter, responding to a newly released inflation figure of 8.5 percent. “This must be a wake-up call for the White House,” he wrote. “Stop making things worse with bad energy policy and let the market work. Restart the Keystone pipeline, expedite natural gas pipeline and LNG facility approvals, and repeal restrictions on U.S. oil and gas production.”