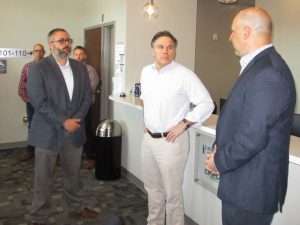 Lackawanna College vice president for college advancement Brian Costanzo welcomed PA Senate candidate Dave McCormick to the Tunkhannock Center on May 10, just one week before the primary elections that will determine whether or not McCormick advances to the general election in November. Prior to a tour and a roundtable discussion with representatives from the natural gas industry and civic leaders, Brian provided and overview of the School of Petroleum & Natural Gas (PNG), its role in filling positions within the gas industry, and the importance of partnerships with industry leaders to keep tuition low.

Dave’s staff reached out to Coterra for the opportunity to hear, first-hand, the status of operations in the Marcellus shale and the importance of schools like Lackawanna College and the Susquehanna County Career & Technology Center (SCCTC) to building a workforce for family-sustaining jobs in Pennsylvania or the oilfields of the Midwest. Dave told our panel that he was in Tunkhannock to listen.

“Wherever I go, people want to talk about energy,” he stated. “I’m trying to learn the one thing that I would do on day one as a senator to unlock that potential.”

The three challenges on which our panelists agreed from their unique perspectives were the need for more infrastructure, streamlined permitting, and a new mindset among parents and educators to override the stigma that students are somehow under-achieving if they select a trades education over a traditional four-year college.

Matt Austin of Holcombe Energy Resource LLC told Dave that the greatest need is to get the pipeline projects back on track and that it was disconcerting to know that Boston is getting its gas from overseas. And, even though a large part of Matt’s business involves trucking, he admitted that trucking is not the most efficient nor safest way to transport natural gas.

On the topic of infrastructure, Wyoming County Chamber of Commerce president Gina Suydam related the decade-long struggle that she and others underwent to make natural gas available to businesses and consumers in Tunkhannock. The Chamber helped to secure two one-million dollar grants to bring gas from a transfer station into the county seat. But Gina said that she was constantly dogged by the question, “How many jobs are you creating with this pipeline?” Her reply was, “I can’t create jobs until I have the infrastructure.”

Dave said that he was puzzled by the fact that PNG students with a two-year degree can move directly into jobs with an $80,000 per year salary and that there are more jobs available than the schools can fill, yet he’s still hearing across the state that young people are leaving because there are no jobs available.

Brad Reid, LC Tunkhannock Center director, said that secondary school officials are not getting the full picture. “There is a misunderstanding that once a well is drilled, the work is gone,” he noted. “We need to educate the educators.”

Zach Conrad, a completions engineer for Coterra went to school in Marietta, OH, and said that the misconception prevails there as well. “They think it’s a dying industry, when nothing could be farther from the truth.” Zach is from New Milford in Susquehanna County and was one of several members of the panel that credited the natural gas industry for making their return home possible.

The current projection for ongoing drilling and production in the Marcellus shale is at least another 50 years. GasSearch Drilling Services trucking foreman Bob Bennie said that, when he began working in the area 10 years ago, there was a common saying that “the last man to drill a hole here hasn’t even been born yet.”

As for the need to get more students enrolled in trades-based education, Shaelynn Shave of the Northern Tier Industry & Education Consortium proposed that the key is to engage youths as early as possible in STEM studies that will better prepare them for college. Skillful use of Educational Improvement Tax Credits also provides many students with the opportunity to start earning college credits before they graduate from high school through dual enrollment programs.

“I think the kids are starting to understand,” Gina suggested, noting that her daughter wants to finish her education locally and stay closer to home. “It’s the parents that need a different mindset.”

In his closing remarks, Dave said that Pennsylvania is blessed with abundant natural resources and companies that operate at the highest standards to protect the environment while enhancing national security. What continues to trouble him though are recent surveys that suggest that parents no longer believe that their children will be better off than they were.

“They no longer believe in the American dream,” Dave lamented. Nonetheless, he concluded, “I’m leaving here more energized. As a seventh-generation Pennsylvanian, I can see that natural gas is not only important for Pennsylvania but the whole nation.” 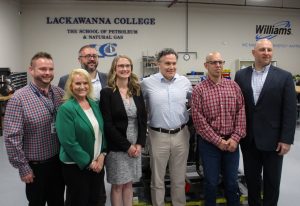