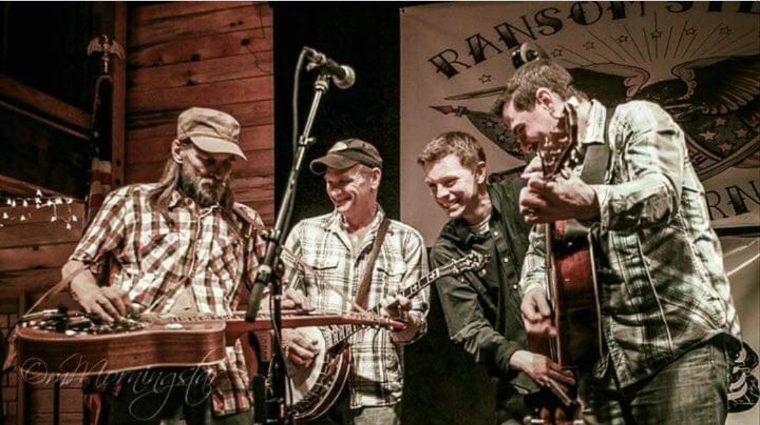 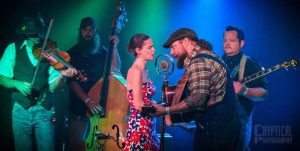 Bug Tussle (top) from New York’s southern tier will do two shows on the Traditional Stage at NEPA Bluegrass on Sunday, June 5. The Hillbilly Gypsies will wrap up the party on the Progressive Stage on Saturday, June 4. The festival at Lazybrook Park in Tunkhannock opens on Friday, June 3.

As this year’s NEPA Bluegrass Festival draws nearer, organizers Danny and Christa Stewart have completed their roster of performers for both the Traditional and Progressive stages. The event will run for three consecutive days from Friday to Sunday, June 3 to 5. Gates at Lazybrook Park in Tunkhannock will open on Thursday morning, June 2 for patrons who have pre-purchased weekend passes.

In addition to those announced last month (read about it here: http://www.endlessmtnlifestyles.com/nepa-bluegrass-festival-to-feature-high-caliber-lineup/),acts recently confirmed include Hillbilly Gypsies, Mason Porter, Bug Tussle, The Plate Scrapers, and Beartracks. The latter two groups are making their NEPA Bluegrass debuts.

The Hillbilly Gypsies will return to a crowd anxious for their high-energy mix of old-time bluegrass music and foot-stomping, modern mountain music. The group hails from West Virginia and has two decades under their belts of honing their unique sound. A combination of family and friends, the Hillbilly Gypsies have been heavily favored in recent years to close out the Progressive Stage on Saturday night with an authentic barn party that often stretches to midnight. 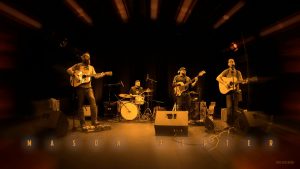 Returning act Mason Porter (above) gets the honor of hosting the late show on the Progressive Stage on Friday night. Their repertoire is truly forward-looking Americana with aspects of rock and folk combined with the traditional sounds that their Appalachian instruments were designed to deliver. Members form the West Chester-based band include Joe D’Amico on mandolin, Paul Wilkinson on guitar, Tim Celfo on bass, and Josh Steingard on drums.

Bug Tussle from Vestal and Owego, NY, wins the honors of being this year’s most local band. Originally known as Band of Strings, the four-man outfit is known for shaking things up a bit in a fast-moving show that can slide seamlessly from a well-known bluegrass anthem into one of their original pieces like “Hippies in the Henhouse.” They will be playing on the Traditional Stage twice on Sunday. 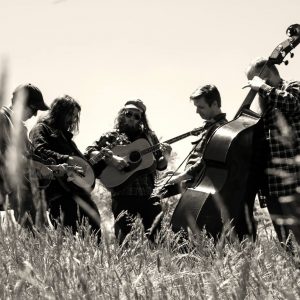 The Plate Scrapers (above) are a five-piece band incorporating mandolin, dobro, and banjo with guitar and drums. Formed in 2014 from diverse backgrounds, the men have released three live albums, the latest of which – “Destination Horizon” – debuted at #9 on Billboard’s Bluegrass Album Chart in 2020.

An interesting note in the band’s biography reads, “They aren’t afraid to get weird at a late night festival slot,” which Christa Stewart says makes them perfect for NEPA Bluegrass. “These guys are so much fun,” she remarked. “We are so excited to have them at Tunkhannock.” 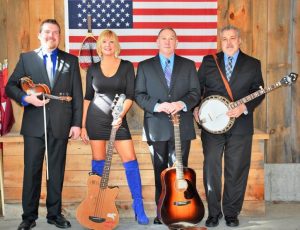 The Beartracks (above) are led by brother/sister duo Tom Venne and Julie Hogan, who made the switch from traditional country to bluegrass at the suggestion of cousin Junior Barber in 2004. Julie still has a penchant for retro country fashions and wows audiences with her go-go boots and miniskirts. “They’re a super fun group from New York state. Julie is the cutest thing,” Christa said of Beartracks. “They are very interactive and another great regional choice for the festival. We’ve always wanted to have them here, and people are going to love them.” 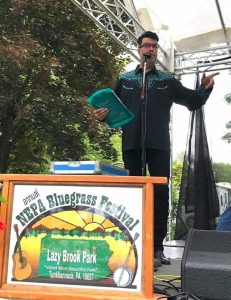 Of course there’s more to a good music festival than just the bands, and the Stewarts appreciate the talents of emcees Steven Simpson (above) and Sandi Marola (below), who have introduced acts on the Traditional and Progressive stages, respectively, for many years. Sound engineers for the Traditional and Progressive stages are Rich and Melissa Freese and Jeff and Laura Alhum. 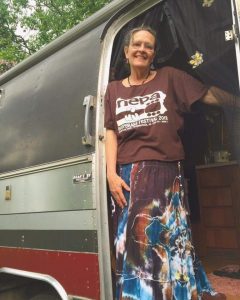 “NEPA Bluegrass is a sum of its parts,” said Christa. “And our emcees and sound techs bring a continuity to the festival that is sometimes taken for granted. We couldn’t exist without them.”

In addition to almost continuous music, there are many ongoing activities for family members of all ages, as well as shopping opportunities and delicious food at both ends of the park. Those new to the NEPA Bluegrass experience can bring their swimsuits and inner tubes to play in Tunkhannock Creek or simply relax and make new friends with like-minded people.

Sponsors this year include Grovedale Winery, Paige Capo, and Shores Sisters. And the Stewarts have partnered with the Comfort Inn in Tunkhannock to reduce the cost for overnight stays for those who ask for the “bluegrass rate.”

Festival tickets can be purchased online at www.nepabluegrass.com, and regular updates are posted on the NEPA Bluegrass Festival Facebook page. Free camping is available only to those who purchase weekend passes in advance. Day passes are also available.