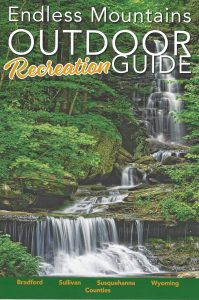 A four-county map (top) outlining the Endless Mountains Heritage Region is at the center of the EMHR’s new Outdoor Recreation Guide (above). Waterfalls are abundant in Sullivan County and have their own page in a new Parks & Trails brochure (below).

“The Endless Mountains region has never had an all-encompassing outdoor recreation guide before,” said EMHR executive director Cain Chamberlin. “We are happy to do a Sullivan County-specific outdoor guide as well, as several of our state parks are there such as Ricketts Glen and Worlds End and the Loyalsock Forest.”

“The goal of the guide was to provide an all-encompassing overview of assets that residents and visitors alike can enjoy.” BCTPA executive director Robyn Cummings noted. The time was perfect, she maintained, to create the guide, knowing that travel trends for 2021 won’t be much different than 2020. “We recognize that many people aren’t jumping on airplanes but opting for camping and traveling close to home, and we wanted to showcase all the options for fun, safe, family time together.”

“Once people come for that outdoor recreation product, they’re going to see how much more the area has to offer with its small towns and shops,” EMVB executive director Jean Ruhf added.

The Endless Mountains Outdoor Recreation Guide is available as a booklet and digitally at www.EMHeritage.org as well as in travel kiosks and offices of like-minded partner agencies. Printed copies of both can be ordered at no cost through the EMHR website or the respective websites of the BCTPA and EMVB.

“For anyone visiting our four counties, this is the ultimate resource they can take with them on the go,” said Chamberlin, who expressed gratitude to the commissioners from each of the four counties for their support of the project. “You could plan several adventures just using this guide.”

The D&H Rail Trail in eastern Susquehanna County is highlighted because it was named by the Pennsylvania DCNR s the 2021 Trail of the Year. The EMHR is planning several public events there from Spring to Fall in conjunction with the PA Rail-Trail Council.

Cummings noted that camping opportunities abound in Bradford County, with Mt. Pisgah State Park being a prime attraction. “From a more secluded wooded area to pull in your camper to wooded log cabins right by the water, we have so many options available,” she explained. “Grovedale Winery for example hosts campers and is ideally situated between the Susquehanna River and downtown Wyalusing.” Those going to Mt. Pisgah should also check out Mt. Pisgah County Park, one of four maintained by Bradford County Parks & Recreation.

For those seeking new adventures in Wyoming County, Ruhf recommends the trails at Keystone College, the Howland Preserve and Little Rocky Glen Preserve. In Susquehanna County, she’d like to see more people on the Endless Mountains Trail at Montrose or visiting the Woodbourne Forest & Wildlife Preserve. “Besides Elk Mountain, the booklet also highlights trails for cross country skiing, snowmobiling and snow snowshoeing, which are becoming very popular,” Ruhf remarked.

Chamberlin added Salt Springs State Park north of Montrose to the recreational bucket list. In addition to old-growth hemlock forests and waterfalls, Salt Springs is one of few parks not managed by DCNR personnel but by the local Friends group that preserved it.

The Pennsylvania DCNR reported record use of state parks and visits to state forests last year, especially in Sullivan County. The Explore Sullivan County Pennsylvania Parks & Trails brochure shows the hot-spots and provides lesser-known alternatives. “It has a lot of the hidden treasures that people weren’t aware of before,” said Ruhf. “Somebody who might come up to the area to go to Ricketts Glen and see that the parking lot is too full and go over to the Loyalsock Trail or the Haystacks instead.”

The Sullivan County brochure is a pocket-size pamphlet with a four-page fold-out map that breaks down recreational sites categorically by State Parks, State Forests, State Game Lands, Conservancies, Local Parks and Recreational Facilities, and Gravel Roads. The latter includes scenic thoroughfares accessible during fair weather that skirt the other venues or connect them. Waterfalls are abundant and have their own page.

“Our state parks and forests in Sullivan County get a lot of attention and rightly so,” said Chamberlin. “Given that the Loyalsock District issued more camping permits than any other district in the state last year, we don’t see visitation to the Endless Mountains going down anytime soon.”

“There’s information in there about Sullivan Falls down at Jamison City,” Ruhf noted. “There’s a trail there that takes you to Ricketts Glen, but it’s not part of Ricketts Glen. That’s pretty cool.”

The two recreational pieces represent the first collaboration by the three entities in several years and also involved the planning departments of the respective counties, the DCNR, the PA Game Commission, and The PA Fish & Boat Commission. Travel writer Morgan Christopher and graphic designer Aaron Imbt are credited for the look and feel of the Outdoor Guide. 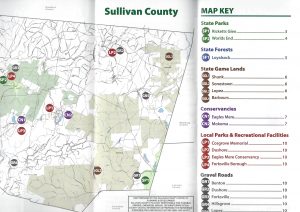 A portion of the centerfold map in the new Explore Sullivan County Pennsylvania Parks & Trails brochure shows the categories of recreational sites and venues that are publicly accessible.