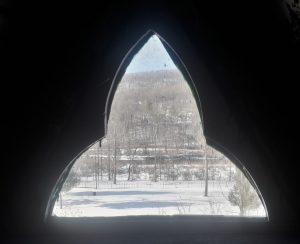 A photo taken by Ed Krizauskas (top) shows the Starrucca House as it appears from Ira Reynolds Riverfront Park. It is clearly visible again since the removal of a long row of railroad cars that had been parked in Susquehanna since December. Photos taken by Starrucca House resident Andreas Plonka, Jr. (abobe and below) show Ira Reynolds Riverside Park and the Susquehanna River as it appears from the upper parts of the building. 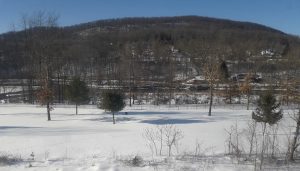 When video of dozens of black tanker cars being pulled by a New York, Susquehanna and Western Railway (NYS&W) locomotive out of Susquehanna on Feb. 14 surfaced on Facebook and YouTube, Ed Krizauskas grabbed his camera and went downtown. From the other side of the tracks, Krizauskas was able to capture a fairly unobstructed view of the iconic Starrucca House.

The video was posted by Andreas Plonka, Jr., who resides with his family in the Starrucca House. On his posts, Plonka noted how nice it was to be able to see Ira Reynolds Riverside Park again and went on to post some photos of the expanse taken from the upper part of the building.

It seems as though, during a harsh winter that is made a bit stranger by the ongoing pandemic, the open view and the sharing of the posts on social media have a lot of Susquehanna area residents thinking about spring and improvements planned for the park through the summer.

In 2017, Susquehanna Borough was awarded a $250,000 DCNR grant under the Brownfields to Greenfields initiative to plan for and begin construction on a new community park there. The 14-acre site was formerly owned by the Erie Railroad, which constructed a train building and maintenance yard there that was active through 1952, employing more than a thousand people at its peak. 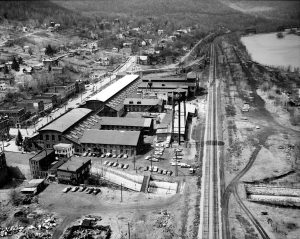 After demolition of most of the structures in 1980 and ’81, the site became covered with trees and undergrowth but was by no means “green.” It had been deemed a hazardous site due to contaminants left behind by the railroad industry. The first phase of the transformation was an environmental clean-up of the site. But residents should see a surge in activity there this spring.

“There are still things to be built,” said Susquehanna Borough council president Roy Williams. Plans for 2021 include the construction of a pavilion, utility sheds, a dog park, and a volley ball court. Also in the plans for this year is the construction of an adequate park entrance in the area of Erie Street that will provide safe access and egress for vehicles, bikes, and pedestrians.

There are a number of elements that need to come together for everything to happen, and the council will work with DCNR and DCED to help them coordinate a agrand opening date for the park. “They have been wonderful, I have to say. All of them,” Williams noted of the inter-agency collaboration, also giving a nod to the DEP for handling the bulk of development.

As for the new railroad crossing, the borough is counting on an effective working relationship with NYS&W. Representatives have taken the borough’s plans to rail yard owner Norfolk Southern, which maintains one active line through town that still carries at least one train per day, for approval. Williams is also optimistic that a PennDOT Multimodal grant will be approved by March 23 specifically for the construction of the new entrance.

In the meantime, the public can access a portion of the park via a parking lot at the lower end of Exchange Street, under the river bridge. The lot provides handicap accessibility to a one-mile walking trail that has recently been used by cross country skiers. The space that buffers the trail is available for rentals for small music events and other activities as permitted by current CDC guidelines.

Plans also include the placement of blue stone benches throughout the park to commemorate local residents and organizations. The benches have a common design and can be ordered through borough activities director Valerie Senese at 570-853-3235. Senese is also the person to contact for rental information.

“It’s a beautiful piece of ground and, by the end of this summer, we’ll pretty much have in there what we want to have in there,” Williams remarked, citing the aforementioned elements, plus landscaping and flower beds. “Believe me, the community is very happy with this. It’s something of which we can be proud. It’s situated within the borough, but we want everyone in the area to come down and utilize the park.”

“The development of Ira Reynolds Park will offer our community a venue for exercise with walking trails and open spaces. While visiting the park, we will get to enjoy the sight of the Starrucca House and the spectacular seasonal views of the rolling hills of Susquehanna and Oakland,” said lifelong Susquehanna resident Beth Matis Tingley. “It is a wonderful tribute to Ira Reynolds, a kind and generous man who spent so much of his life educating young people about the value of nature and service to each other.”

“Ira Reynolds Riverside Park is a beautiful addition to our wonderful community,” said Susquehanna County commissioner Judy Herschel, who served as project manager in 2017 and ’18. “In fact, it’s exactly what we all need.” Herschel described working on the project with so many motivated people as “quite a journey,” adding, “Our community is ready and excited to get out there this spring to enjoy all the things that this park can offer.”

The mile-long walking trail at Ira Reynolds Riverside Park was taking on another coating of snow on Monday.

Video link of cars being pulled away shot by Andreas Plonka, Jr.