Among the large group of students representing Northeast Bradford FFA in Harrisburg last week were (front, from left) Gavin Neville, Carson Vrable, John Calkins, Sydney Howland, Logan Shaddock, Donald Bolt, and Kristin Davis, each of whom received their jackets at the Farm Show on behalf of the Pennsylvania FFA Alumni Association.

(Originally published in the Rocket-Courier)

The convention was quite an extravagant affair, with more than 5,000 FFA members, advisors, friends and family members from across the state filling the New Holland Arena of the Farm Show Complex.

“The Mid-Winter Convention is a huge deal for our chapter,” DJ remarked. “Whether you’re being presented with your jacket, a Keystone or Star degree, it is an amazing feeling.”

“It signifies that we are half way through the year, and it also meant that our new members were getting their jackets,” Ava added. “This was my third time attending the Convention, and all of those times have been monumental moments in my life.”

Ava noted that NEB FFA advisor Michala Forrest helped to plan a Mid-winter convention in 2014 when she was a state FFA officer. This was Forrest’s first time returning as a faculty advisor.

“Today’s FFA members are tomorrow’s industry, and community leaders,” Sec. Redding told the students. “Agriculture is among the top drivers of the Pennsylvania economy, and agriculture education opens doors to learners of all ages to explore a wide range of high-tech professions, and prepares students for college, career, and community readiness.”

“FFA has pushed me to step outside my shell and be the best version of myself,” Brooke offered. “It has given me more confidence and introduced me to many people who have become some of my best friends and mentors.”

“When I put my jacket on for the first time at the Convention, it felt amazing,” DJ concurred. “I instantly had a huge smile on my face.”

“My jacket gave me a sense of belonging,” said Ava, who received her jacket as an eighth grader. “I had finally found a place where I could grow to be more than just a dairy farmer.”

Having also received her jacket a few years ago, Brooke was proud to be in attendance as her younger brother, John, received his. “I can’t wait to see where that jacket takes him,” she stated.

The Convention lasted more than two hours, with many young speakers sharing their individual progress reports of the previous year. Presenters also talked about new programs and initiatives to help youths stay connected to the changing world of agriculture and empower them to be a part of those changes.

Northeast Bradford’s FFA boasts 160 members, likely making it the largest such group in the region. While no members this year received their Keystone Degrees, seven students were conferred at the 2022 convention. Members agree that involvement with the organization has brought them many opportunities and given them a new outlook on life.

“FFA has helped me academically and with life skills, from learning how to use forestry tools to learning leadership skills at the National Convention,” DJ stated.

Ava agreed. “FFA has helped me gained leadership skills that I use in everyday life when it comes to participating in Student Government and National Honor Society events,” she remarked, adding that it has also helped her narrow down her educational path and get her into Cornell University next year.

The concourses and exhibit halls of the Farm Show Complex were awash with the dark blue corduroy jackets, embossed with the names of hundreds of FFA chapters across the Commonwealth. Students had ample time before and after the Convention to explore the Farm Show in smaller groups.

“I really enjoyed walking around and seeing all the cool vendors and talking with members of other chapters,” DJ related. “Simply the number of people that were there surprised me.” Farm Show officials reported that all previous attendance records were shattered this year.

Among the shows and exhibits taken in by the Northeast Bradford students were the Calving Corner, where cows very close to giving birth are kept comfortably in a large pen; a beef cattle show; goat yoga; and departments in the Main Hall and Giant Hall that touched on every aspect of Pennsylvania agriculture imaginable.

Summing up her experience, Ava said, “It gives me hope for the future of agriculture and all the innovations to come.” 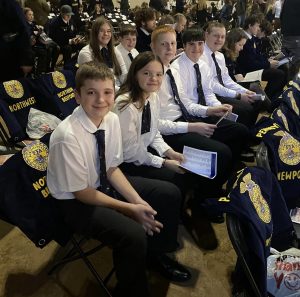 Still in their white shirts, waiting to receive their jackets at the FFA Mid-Winter Convention in Harrisburg on Jan. 9 are (front, from left) Logan Johnson, Sydney Howland, Gavin Neville, Carson Vrabel, DJ Bolt, (back) Kristin Davis and John Calkins.